This giant is on the area called Wyrm's Nest, north-east Westersand [screen 1]. Go there, you will see his tail disappearing in a huge sandstorm. You cannot chase him, because of that storm. Go back to Rabanastre. After entering the West Gate area you will see green bangaa named Rizmat. He looks a little woeful [screen 2]. Talk to him. He'll tell you he's from Archades and he studies sandstorms, but locals don't want to help him. Your answer here is: "Sure, I'll help".

Go to Southern Plaza and talk to the man sitting on the fountain. His name is Cotze [screen 1]. He will tell you that he knew that but he doesn't remember anymore. He advices you to see Northon in Lowtown close to warehouse No 5 kneeling next to red bangaa. [screen 2]. Talk to him.

Now go back to Dalmasca Westersand. On west there is a small area with one exit [screen 1]. Go there. You can find there big cactuses called "Dynast Cactoids". Approach the left one in a shadow, under the rock [screen 2] and take a look at it. You should find the Wind Globe.

Get back to Rizmat. There will be Cotze and Northon with him. Talk to the standing one. He will take Wind Globe from you and will connect it with the one from Cotze. You will obtain Windvayne after that. Luckily Rizmat doesn't need it anymore, and you'll be able to subside the storm in Wyrm's Nest. 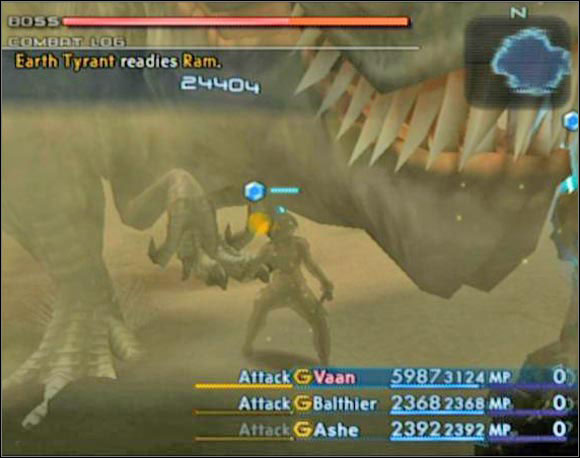 The fight isn't tough but long. Tyrant uses physical attacks like: ram (nothing special), Sonic fangs - very strong attack against one of your heroes and Screw Tail - attack that wounds everyone in front of Tyrant.

Standard tactic - 2x Berserk and Healer. At first the fight goes efficiently and quickly, but before it ends it gets difficult because Tyrant's defense increases. Finish him off and go to Montblanc for reward (1200 gil).