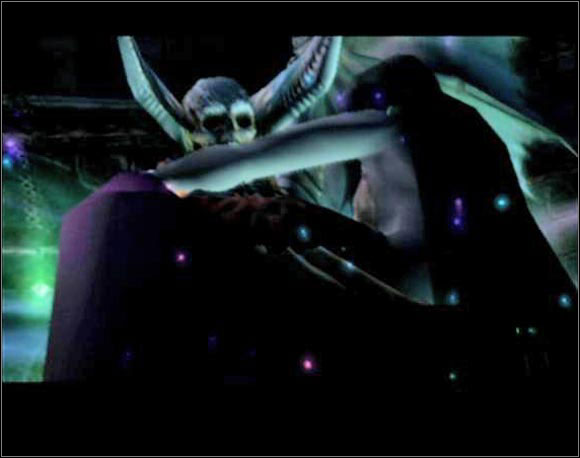 This Esper can be found in the most western area of Barheim Passage, but first you got to complete the "Backdoor" quest.

Zalera uses a lot of attacks related to level e.g. lvl 5 Reverse will cause reverse to every character who's level is a multiply of 5. The best choice is to pick a certain level and prepare equipment, which makes the wearer immune to the attack aimed at him. Just be careful and don't go fighting with Zalera if levels of your party members are prime numbers, because they'll become targets of the most dangerous attack - Prime lvl. Death, which kills everyone whose level is a prime number (a prime number is a number which divides only by itself and one).

Attacks related to level are this dangerous, because they have much bigger chance of working than the ordinary ones e.g. from Sleepga your characters on 56 level have a great chance of defending but when it comes to lvl 2 Sleep this chance drastically falls.

The additional difficulty in this fight is the time limit. You have five minutes to defeat the enemy or the battle will be stopped and you'll be teleported to the former area (the one with save crystal) and you'll have to begin everything from the beginning.

Also at the whole beginning Zalera is supported by Deadbones, but there's not many of them. A few will come from under the ground and after a short time they'll stop appearing. Then focus on Zalera. He may be immune to all attacks and you'll have to wait till he uses enrage - only then your attacks will start producing effects.

After the fight a passage from Barheim to Garamsythe Waterway opens.