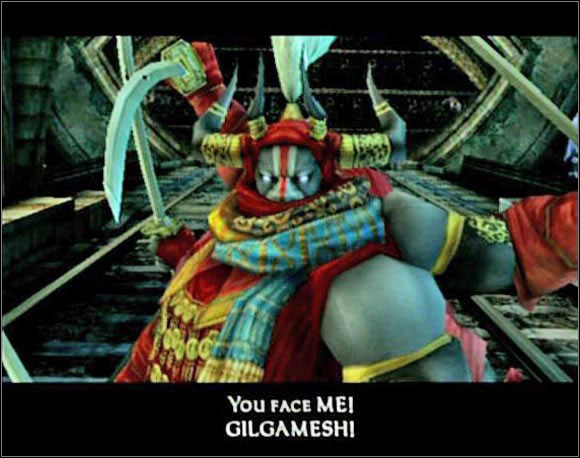 This enemy can be found in Lhusu mines in Tasche Span - just behind the area with gate crystal. The whole battle consists of two parts. First Gilgamesh wants to test you. After the fight on the bridge he escapes. To have this hunt completed you have to find him and finish him off.

First kill Enkidu. It shouldn't take you long (he has only 32 000 HP) and after you're done with him take care of Gilgamesh.

He mostly uses normal attacks and Slicethrice - nothing special. At the end of the battle he'll use Perfect Defense making him immune to physical and magical attacks. Now he'll use Ultimate Illusion, which deals great damage to everyone standing in front of him, twice and then Paling and Magick Barrier will fade. Use this to finish him of.

During this battle you'll probably see that you may differ phases in it, namely Gilgamesh after losing about 20% of his HP will change on of the swords he wields on a stronger one (you can't miss this animation). And additionally you can steal things from him for a few times thanks to these phases. Between 100% - 40% you can steal some gil or potions, 40% - 20% Genji Shield, 20% - 0% Genji Gloves.

During the second part of the fight you will be able to steal the rest of Genji Set, which you won't get anywhere else, so I recommend getting it now. 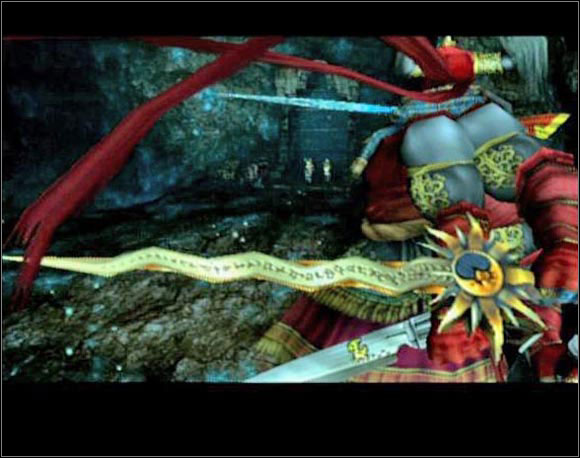 This is the main part of the battle. They're both a lot stronger than before. Now as you can see Gilgamesh has attacks related to levels. Break is not that bad because it will give you time to heal it, but sleep and disable are a totally different matter. If your heroes are on a level that qualifies to these attack give them proper accessories (Black Belt - immune to disable, Nishijin Belt - immune to sleep).

First, like the last time, take care of Enkidu. His normal attacks may cause Petrify and Crushing Fangs may cause death. Additionally Gilgamesh's attack: Fly, Enkidu raises his defense and attack power. After you're done with him go for the main dish (again).

At the beginning he isn't much of a threat for you (if you have equipped the proper accessories). Only his normal attack may cause Sap and there's also Bitter End, which deals massive damage to one of your characters. This fight, just like the last one, consists of five phases. Before the last phase he draws "Sword of Legend". It bodes ill for you. Now he'll use Perfect Defense - you have to with stand it. Now he'll use Monarch Sword twice - a really strong attack aimed at one hero. After that the Perfect Defense effect will wear out. At that time he'll have lots of buffs on him and will be unfortunately immune to Dispel. His defense will also raise and he'll start combining normal attacks into long and fast combos.

After you're through with him it's better to save your game, because on your way back you'll probably encounter Disma - a strong Rare Monster. It's strong, but not enough to defeat you, but if other mobs will interfere with the fight you may have a really hard time.