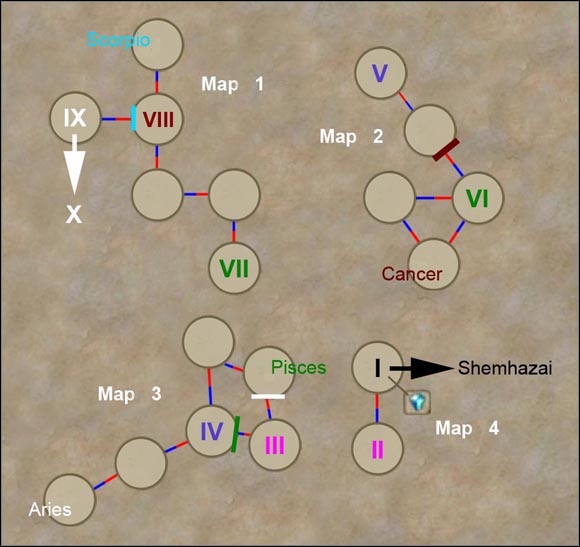 Inside the crystal there's no such thing as map or directions. You'll have to know where you are just by the number of paths leading out of area. The color scheme on the map above isn't accidental. The roman numeral signify the Way Stones - notice that they are always a pair of Way Stones in the same color - it shows which Way Stone is connected to which. The colors of paths also aren't accidental. Red means that the path is going up and blue means that this one is going down. The colored lines that run crosswise through the paths show the location of barriers. Every barrier can be opened by using a device that is located somewhere on that floor - these devices are e.g. Scorpio, Aries, Cancer etc. Their font color match the color of the gate it opens. And the "Map 1", "Map 2" etc. marks shows in which order you gonna visit each floor.

On the empty platforms you can often find a valuable treasures so it's worth the trouble.

You land on map 3. Here you can open either Aries or Pisces or both - anyways you got to open the passage to Way Stone No. III. Run there and use it. You'll land on the lowest level of the Crystal. Run straight ahead. On the next platform you'll find a save crystal and Way Stone No. I which leads to Shemhazai. 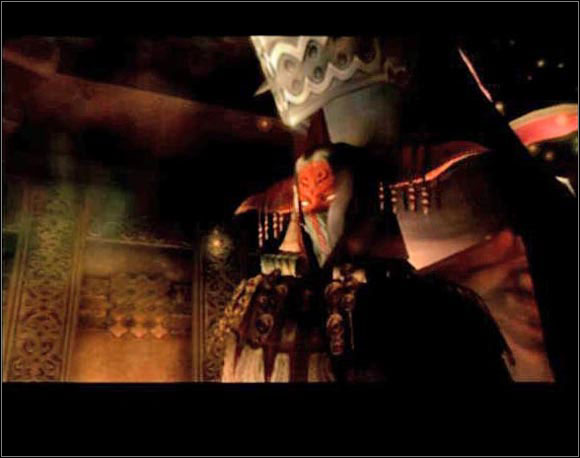 Another Esper to your collection. She may not have especially high HP level but, as in Deadalus case, at the end of the battle her defense will rapidly raise.

Her ordinary attacks may cause Disease to one of your heroes and beside of that she doesn't use the rest of her attacks too often. It's no use attacking her with magick. She's vulnerable to one element and absorbs the others and when you discover at last to which one element is it she changes it using the Shift technique. The best choice is to is to stick to the brute force. Use berserk twice and let the mage handle the healing part (as always). If you can't handle the enemy with only one mage use berserk not on two heroes just on one. 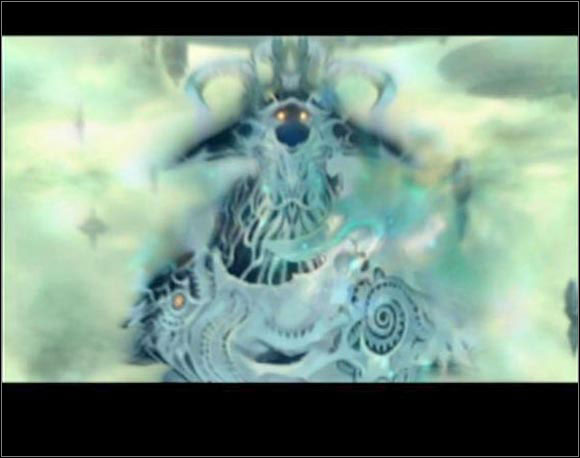 After the battle make your way to the next hall. You'll find there an Empyrean Way Stone. Approach it and read instructions and then touch it. After the cut-scene you'll get the Treaty-blade and the Empyrean Way Stone changes to Tellurian Way Stone, which will teleport you to the area with Gate Crystal.

Acquiring the Treaty-blade also lets you use the Scorpio Gate Stone to get to the Upper Levels of the Great Crystal.

Run to Aerodrome, board your ship and fly to Ridorana Cataract.