The green paths are invisible at first - you have to get walk over one of them to make it appear. They're not marked on the in-game map. 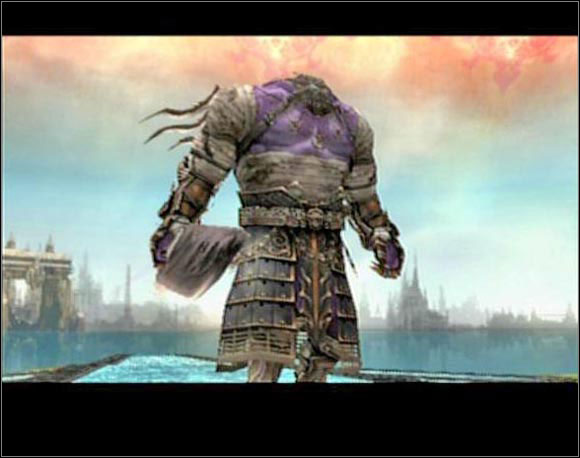 He may have less HP than Rafflesia and he may not summon any henchmen but it doesn't mean that he can be underestimated. At the end of the fight his defense level will grow rapidly.

Deadalus uses during the battle:

Hopefully he doesn't use any attack that causes bad status effects (well except for Tri-attack) so you can cast berserk on two of your heroes and let the white mage handle the healing.

For defeating this one you get 1900 gil from Montblanc.

After the battle Deadalus will change into stone again and a new Way Stone will appear near him - use it.

Inside you'll encounter barriers that do not allow you to go in certain direction (on the left) - in that case simply use the other way out. Sometimes you may run across giants helmets (on the right) - they're not ornaments, they're doors - just use them.

Passages between areas are inactive at first. You can see where they are by small little dots hanging in mid air (on the left), but as soon as you try to walk over them they'll turn into a bridge (on the right).

Inside just turn one every device there is and run to the next area. There also turn on every device and continue forth (see the map above). In the next area you'll find a Save Crystal. Save the game and go deeper inside.

For defeating Tyrant you get 1900 gil from Montblanc.

After his death another Way Stone will appear. Use it to get inside that giant crystal.