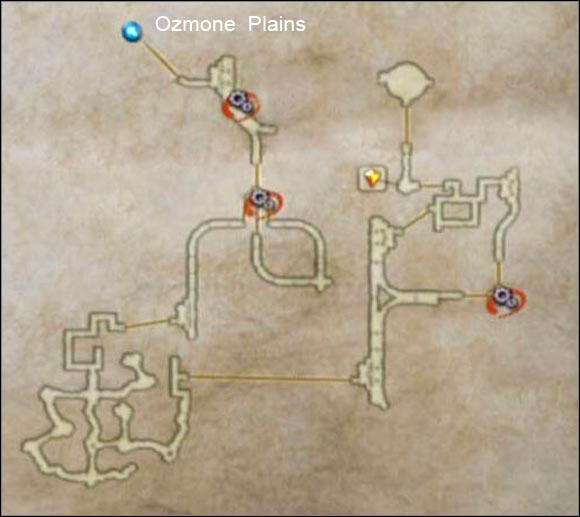 In this mine you'll encounter two kinds of gates: blue and red. To open the red one you'll have to press a switch highlighted in red (screen on the left) and the blue gates (screen on the right) by pressing a blue switch. After pressing the button leave immediately because Jellies start falling from the ceiling (and they won't stop!)

Run to the next intersection - you have to run around, because door leading to the crossroad from this side are red which means that they're closed right now. Press the switch there and leave using the just opened red door. Now the passage to the area with gate crystal is open and ready for you to use it. Go there, save your progress and prepare to another boss fight. 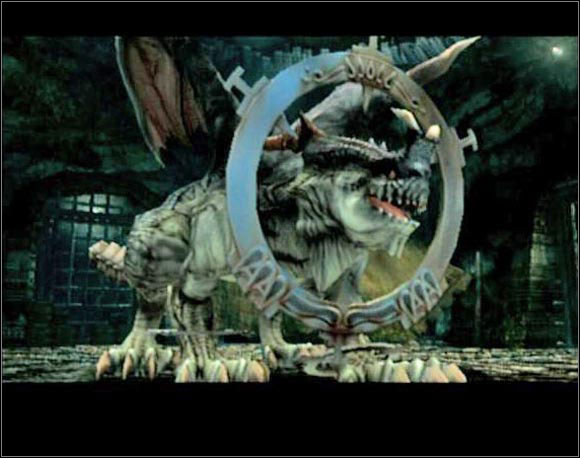 The enemy looks scary, but it's pretty easy to defeat him. Simply use the tactic: 2x Berserk and a Healer as the leader.

Cast the buffs (berserk, regen, shell, protect) near the gate crystal. After you're done buffing one character send it on the bench (disable him in menu) and continue with buffing the next character. Then touch the crystal to replenish your MP points. Go near the entrance to the round chamber, call forth the buffed characters and continue to the next area.

Send Bash as a tank. You should also give him a Black Belt (immunity to disable), but if you don't have one just cure him with Esuna. Give Balthier the Sirius and let him attack from the distance. Ashe take as the party leader. Turn off all gambits that order to cast buffs on leader and run on a longer distance. Don't chime in the direct battle, just keep Bash alive.

You should kill this monster before even the buffs expire or just after they expire. For killing this enemy you'll get 900 gil from Montblanc.

After the fight you'll find yourself in Eruyt Village again. Talk to Teteran - you'll be able to buy some new magick spells.