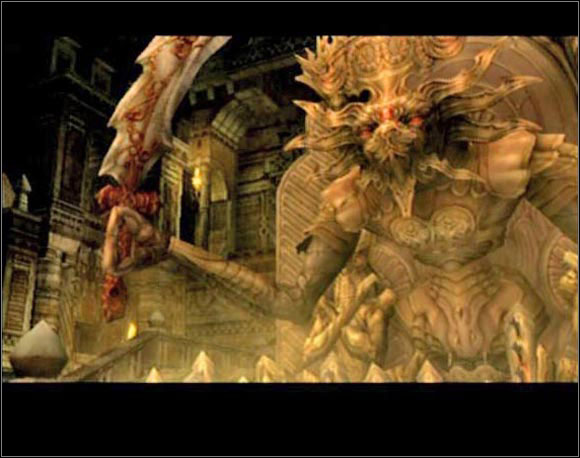 The easiest way is to run, but you can also fight. Forget however about tactics. On this phase of the game the chances to kill it before it squashes you into the wall are very low. It has about 20 000 HP and quite high defense. His attacks are: Annul - it drains your MP, sleep, blind, silence, Telega - sends one of your heroes in another dimension (looks like ordinary KO).

The only way to win this battle now is to keep attacking with the highest quickening combo you can manage to do. And the benefit of this battle is the prize Montblanc will grant you for killing this demon wall: 1200gil and Electrum Nugget (3563g). You'll also gain access to a hidden part of this tomb. After the battle it's good to get back up and touch the save crystal to replenish your health and mana.

If you decide to escape press and hold R2, run to the end of the bridge and open the Ancient Door at the end.

In the next hall another demon wall awaits you. Luckily this one is a lot weaker (about 10 000 HP and lower defense), has longer way to go before it squashes you into the wall and this one can be stopped. To do this approach the Altar of Contemplation under one of the torches [screen 2] and pick the option "Touch the Blazier" - the wall will stop for a while.

This wall has almost the same attacks as the previous one with the difference that this one knows how to use Doom and Chain Magick. For defeating this wall you'll get 600 gil and Warp mote from Montblanc.

After dealing with the boss continue westward and into the next chamber.

To get deeper, to the Raithwall's biggest treasure, you have to activate two switches. One in the south wing and the other one in the north wing.

Here you'll encounter the first Esper ever - Belias. He has around 14-15 000 HP. His attacks are: saber - very strong attack but it damages also the user; Greater Barrier - it cast on himself Shell and protect at the same time; Firaja - large fire damage to every one from your active party. It may also cause Oil; Fire. With a bit of luck you may steal an ether from him.

Immediately after the cut-scene you begin the fight against Vossler and three of his henchmen (Imperial Swordsman 17-19lvl, 845 HP). Use the Warp spell to get rid the whole three at once. Fran, if you decided to use her now, is under the berserk status and you don't have any control over her actions.

Vossler has about 5300 HP. He's pretty easy at the beginning but as his HP level goes down he starts attacking like crazy - he deals a lot of strong attacks one after another. You can't weaken him using magick because he has the reflect status on. The best way out is to have a white mage in party to take care of the HP levels of party members and let Bash deal with Vossler.