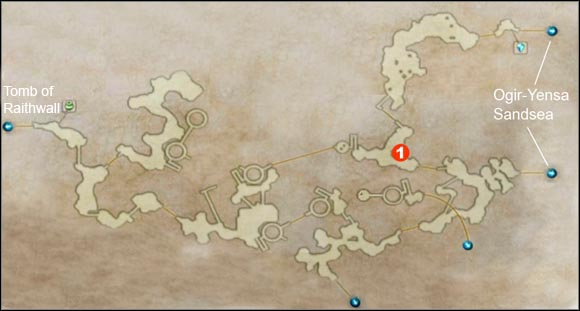 1 - there you'll find the Urutan Eater,

Just like the case of Ogir-Yensa - the exits that aren't described lead to Zertinan Caverns.

After you talk with the moogle go to the crossroads: "Withering Shores" (it's marked with "1" on the map above).

On the crossroad's you'll find the Urutan Eater [screen 1]. He's on lvl 16 and has 8015 HP, but he isn't the type of enemy you should be afraid of. Get rid of him quickly and go back to moogle. He'll tell you that he had just seen that small Urutan and that he probably went searching for treasure for you. Go to Ogir-Yensa. There run upstairs on the Old refinery. After short cut-scene get back to where the moogle was. You'll witness the assembly of Urutans. 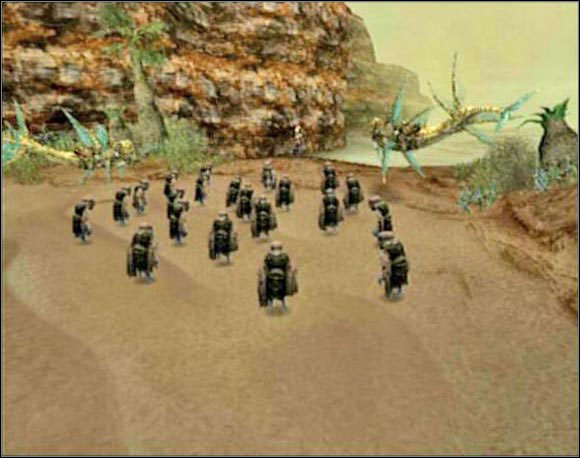 Go in the direction of Raithwall's tomb. Just in front of the entrance you'll come across Dyce again. Replenish your stock if you need to. Go towards the tomb. You'll be granted with an opportunity to save your progress.

Another boss battle awaits you - now it's the legendary bird Garuda. It's a flying monster so the ordinary attacks using sword or dagger won't do you any good. The best effects give bow, gun and the Dark spell. Your party should contain a person which uses a gun, a mage using Arcane magick and Tank or White mage.

Garuda has about 7000 HP and doesn't use any special attack. His ordinary attacks are very fast and may put to sleep, but nothing more.

Tank or the white mage should go first (I personally prefer the version with white mage). Garuda will focus its attacks on this character. You have to heal tank from time to time and the white mage must be healed virtually constantly, but to heal a tank you'll have to use potions and white mage can heal himself. On the character with gun cast Berserk and set a gambit: "foe: nearest visible --> Dark" on the person who knows how to use it. They shouldn't worry about nothing except for the enemy and the party leader (tank or mage) should heal him self and his comrades.