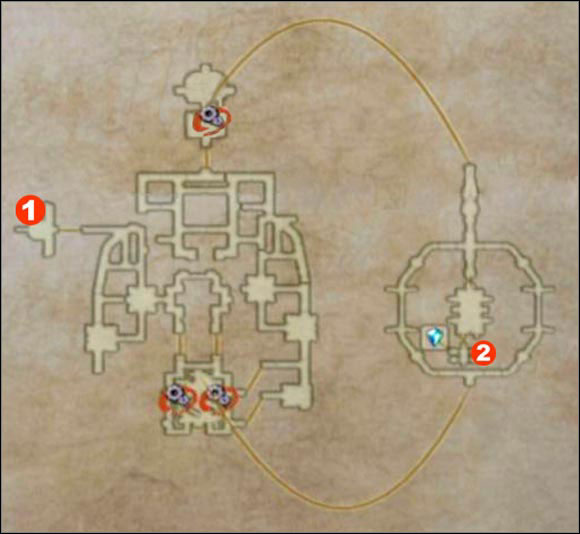 1 - the beginning end the end,

Here you'll find a save crystal - I strongly recommend using it. Here a new character will join you as a guest - it's Vossler. He's very strong and thanks to this, enemies, which often attack you here, won't cause you any troubles.

You have to find prison in this flying fortress to free Ashe. In a big hall just before the prison entrance a fight with two judges and their henchmen awaits you.

Both of them are on lvl 11 but one of them has 2245 HP and the other one has 2445 HP. Their henchmen have slightly higher levels than other soldiers on this ship but their HP levels are lower. Don't bother fighting them and concentrate on judges. Killing them will end the battle. After the battle you'll get the key to prison cells.

Go through the door on the right [screen 1]. You'll find yourself in a room with four cells. In number one you'll find a save crystal a System Access Key - you have to take it. In cell No. 2 sits a moogle called Tetran. He runs a shop here. He has most of the equipment you could find in Bhujerba and additionally some accessories. Ashe is in cell No. 3. After freeing her walk out of the room. An alarm will rise, but this one does not turn off by itself.

Go to a big hall with two devices inside (see map above). They are called Security Stations [screen 1]. Use one of them and pick: "Use System Access Key" and "Reset alarm" and once again "reset alarm". This will grant you a minute before the alarm rise again. Kill every soldier that is in this room and reset the alarm again. Now run to the area where you began [screen 2]. 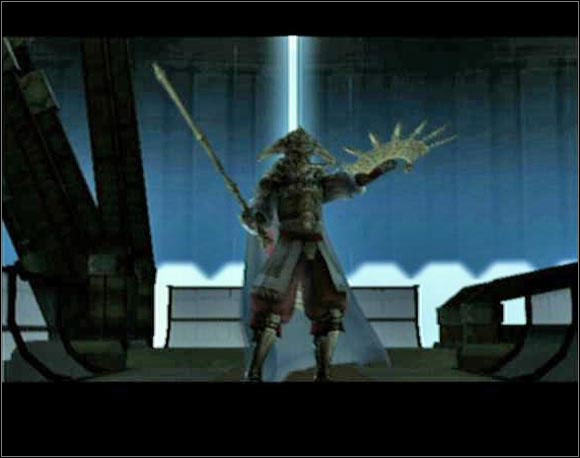 Here you'll have to face a boss called Judge Ghiss and three of his henchmen. It's a pretty ease opponent to defeat. He has somewhere around 3000 HP. Just attack him using quickenings. Combo of three quickenings on level 1 finished by the Inferno aimed at Ghiss will be enough to finish him of. Before entering this room make sure that every one in your party have at least one mist charge (except for Vossler of course) - this will make things a lot easier.

After the fight you get back to Bhujerba. There are new things ready to be bought in shops but don't bother buying them. It's better to visit Rabanastre - there are better things available by now. In Bhujerba visit only the shop with magick.

After you deal with everything that had to be dealt with go to Ondore's mansion. Talk to the Bhujerban Sainikah standing in front of his mansion and pick: "Take me to him". You land in Dalmasca Westersand. From here go westward.