1 - a switch opening the big gate,

*Rare; ** It's better not to sell this; *** They appear when power level is low enough

Go straight on. In the small room on your left you'll find some treasures then use the Timeworn Device and pick: "Press the switch". Go downstairs and talk to Burrogh. He'll give you a Tube Fuse (you may make small shopping by the way, it's worth to buy a new armor and weapon). Get back to the Timeworn Device (now it's called Power Relay) and install the Tube Fuse in it. Save your progress go downstairs and open the gate by using the Gate Switchboard. Go ahead.

In this room get rid of the mimic fast and then take out the zombie. Run downstairs and destroy Tiny mimics along the way. Downstairs destroy next Battery Mimic. Collect every treasure in here and continue to the next room. The places where mimics drain energy are marked on your in-game map.

Here you can see two mimics - one is already draining the energy and the other is searching for a right spot. Destroy them both. If the searching one escaped you on the first fork [screen 1] you'll have to go right, if you took him out earlier just go left. On the next fork [screen 2] first pick the path leading right. A mimic will pass you by. It may hit you once and then run away. Follow it - it will hide in the second corridor and start draining the power. Get rid of him, get back to the fork and go right once more. On the next fork go left (in the corridor leading right you'll find only a random treasure and a map). Follow the tunnel. On the station destroy a mimic and enter a chamber. There destroy two more mimics and get back on the rails.

Use this crystal to save your progress and continue to the next, round hall. Next boss fight awaits you. 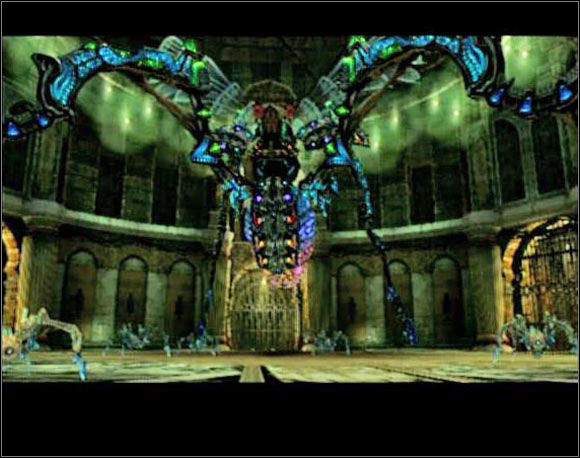 This boss, to say the truth, is really weak. Two characters should know how to use blizzard (e.g. Vaan and Fran), Bash is really strong in the close range and Balthier uses a potion from time to time. First and foremost - concentrate on the boss itself. Don not care about its offspring - they do not care about you and just as they born the run to a nearest wall to drain energy. They'll start attacking you when there's no energy left for them to drain, but when it comes to that the battle will be long over.

Its attacks beside the ordinary one are:

After the fight you find yourself on Dalmasca Estersand. Save your progress and get back to Rabanastre.

In Rabanastre it's worth to visit the Centurio HQ first - you'll get small bonuses for defeating the flan gang (150g), Firemane (200g) and Mimic Queen (300g). Now run to Migelo's shop, then to Old Dalan's place in Lowtown and to Balzac - you'll find the last one somewhere in the middle between south entrance and the north one, on the west side of Lowtown in North sprawl.

Now run to the Sandsea, go upstairs, leave the sandsea and run to Aerodrome.