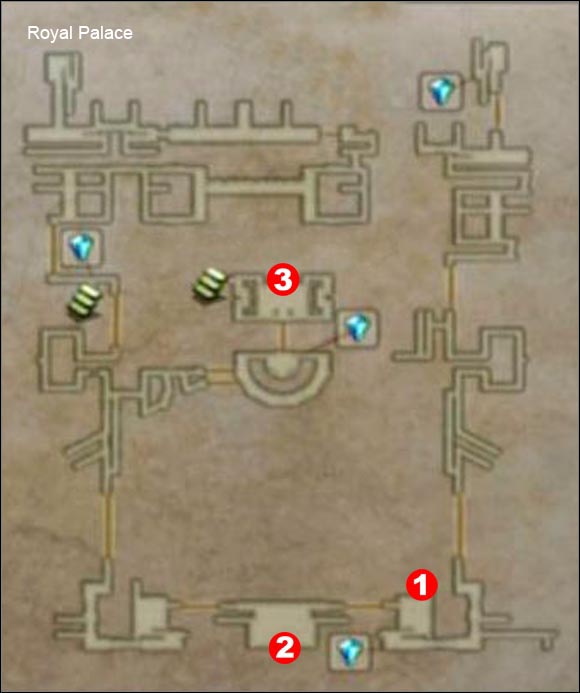 1 - place where you are attacked by imperial soldiers,

2 - place where you fight with Flans gang,

And once again you land in sewages. This time you're not alone - Balthier and Fran join you [screen 1]. Use the crystal to save your progress and go downstairs. Here Balthier will introduce you to the gambit system. After the lecture end set the gambits a bit differently if you want. Let Balthier have the First-aid and set him and Fran gambits: "Foe: party leader target; attack", and give Fran also "ally<70%; cure" and set it as the first one. Vaan as a party leader should have: "Foe: nearest visible; attack"

Examine the soldiers' corpses [screen 2]. Now run freely to the next save crystal and don't forget to collect the treasures along the way.

When you pass the next crystal you'll be attacked by four imperial soldiers. They're all on level 5 but their HP levels vary from 170 to 210 and the weakest will have Protect on him. They may not have any weakness but magick works well. After the fight get back to the crystal to replenish your health and MP. Amalia will join your party as a guest.

In the next chamber a fight with a Flan gang awaits you. They're also on level 5, but their HP levels vary from 360 to 420. They're all prone to fire - use it.

After you have disposed of all of the flans run to the next save crystal. I recommend using it because in the next hall you'll have to confront a boss: 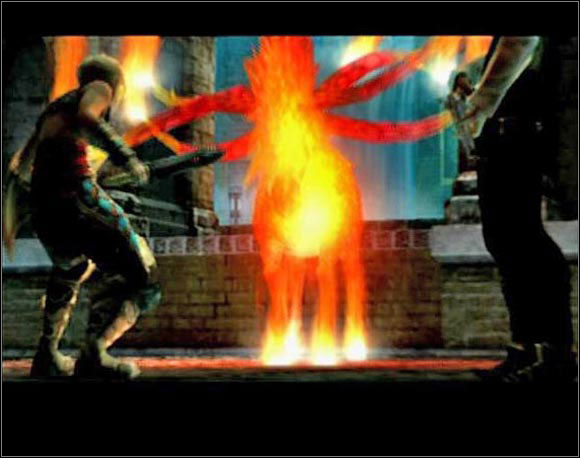 Begin with casting a lot of Blizzard spells. When your MP fall under 10 stop using them - save it for cure or use ether. In addiction when your HP will be low Amalia will help too by using some potions.

Firemane uses in fight fire and kick which are ordinary attacks - nothing special. It uses also rush which isn't exactly an attack - Firemane teleport somewhere else and in a short period of time you can't neither target him nor attack him.

The most dangerous of its attacks is the bushfire which injure everyone and may cause poison. In such situation use an antidote on all of the poisoned ones and continue the fight. During the fight focus mainly on the hero who directly takes damage, but do not neglect the rest, because the next bushfire attack may kill them.