This page of the FF7 Remake guide focuses on Chapter 18 - Destiny's Crossroads, the game's final chapter. The team escapes from Shinra's headquarters - however, it soon becomes apparent that future events may turn out to be very different from those in the original. What alternate future awaits Cloud, Aerith, Tifa and Barret?

Flying Through the Night 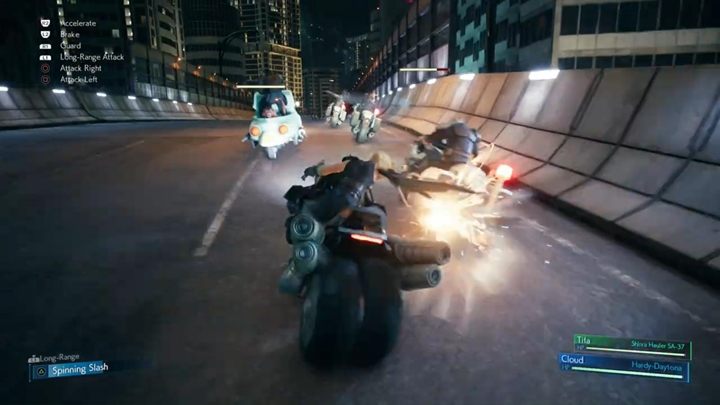 Time for another motorcycle sequence, similar to the one from Chapter 4. The rules are virtually unchanged - speed up, slow down, approach enemies and slash them with the sword. Red will heal you - don't worry too much about the damage. 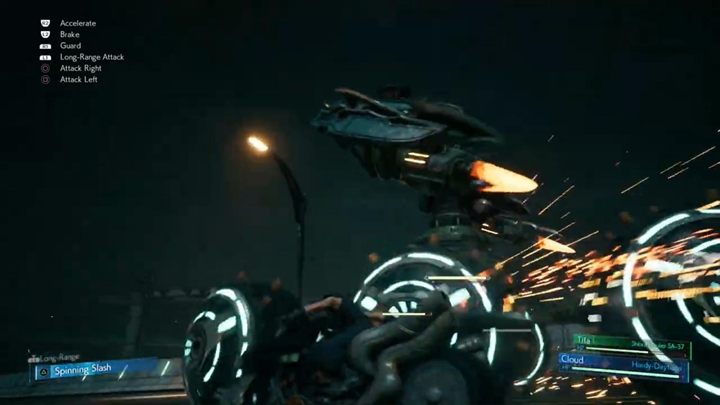 After a while, a giant robot will appear - this is a much stronger enemy. You have to get close to his wheels and cut them. You have to destroy three wheels on each side. The enemy will shoot at you - block those attacks because the fight is quite long and you need a lot of health. Red won't heal you during this battle. 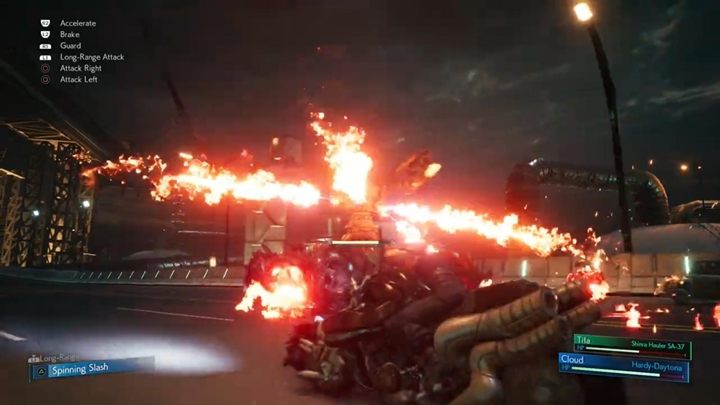 When the enemy lifts the wheels, drive away, or the impact will hurt you. When you destroy the wheels, the enemy will stagger and you can damage him a little bit. Use Spinning Slash to build up a huge multiplier. As the enemy prepares to attack you with fire, slow down and drive away from him to avoid damage. 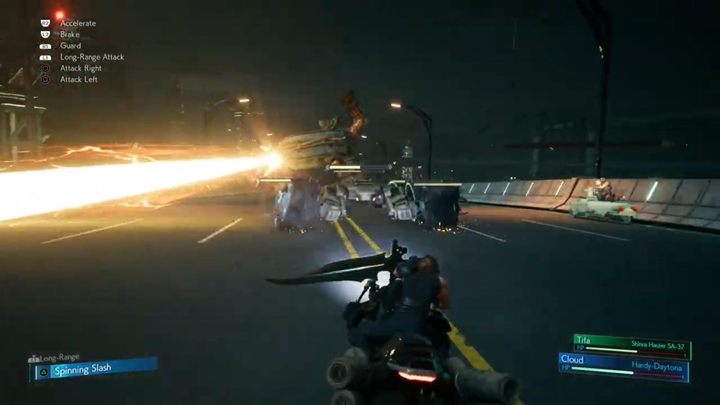 The opponent moves forward a bit and start firing mines - avoid them. After a while, you will be able to get close to the enemy and continue destroying the wheels. The opponent now has a powerful laser attack - be sure to run away from it and, if needed, pull up from the other side and destroy the wheels. Eventually, you will destroy the enemy.

You will now be able to cross the mysterious inter-dimensional gate. Prepare well for the fights - these ones are a real challenge. The whole sequence boils down to demanding battles. 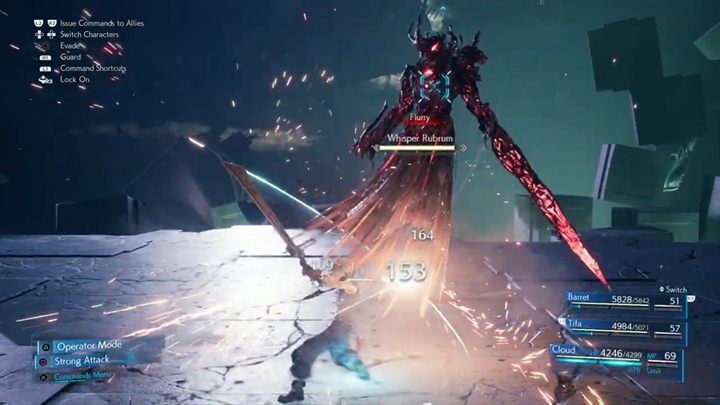 The first is a fight against Whispers. You will face Whisper Rubrum, Whisper Viridi and Whisper Croceo. Your team will undergo some changes during these fights. However, Cloud will always be on your team. Opponents are pretty strong; they have strong attacks and it is best to counter them with e.g. Cloud's Punisher Mode. Aerith should focus on healing. 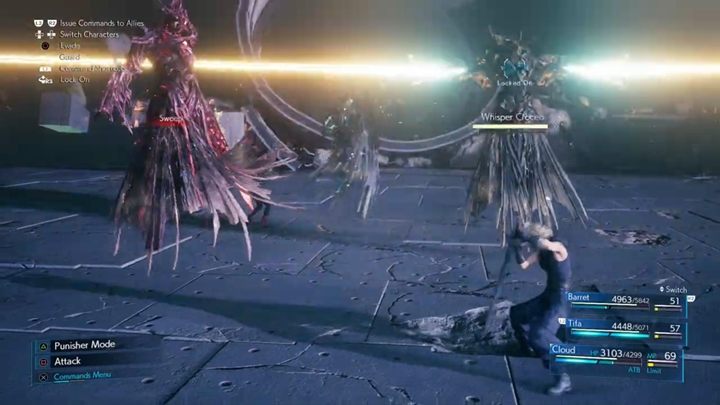 Eventually, you will have to fight three Whispers at once. It is a pretty tough battle because the enemies love to use their special attacks, making the fight very chaotic. 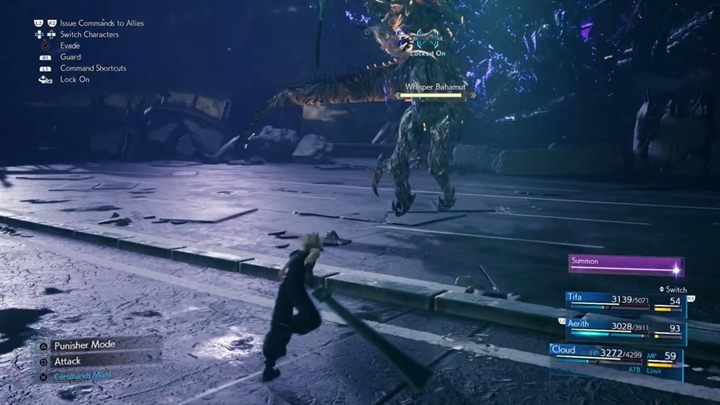 At some point, the enemies will merge and form Whisper Bahamut. Make sure your team has a lot of health because the Mega Flare attack can eliminate the entire team. You can e.g. cast Regen on every person and order Aerith to heal others when they need it. Save up Summons and Limit Breaks to beat Bahamut, who has quite a lot of hp, as fast as possible. 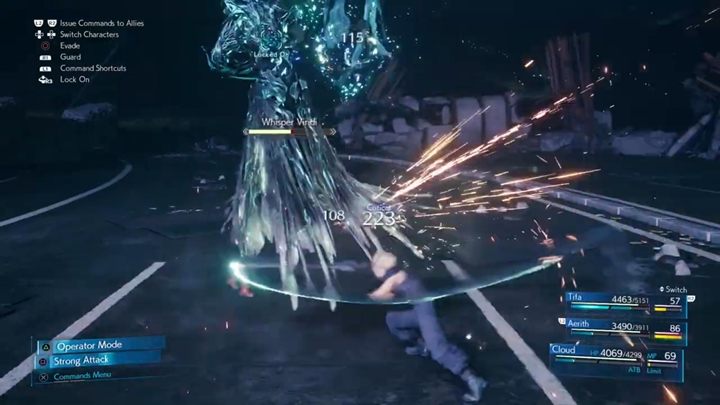 Then you have a short fight with Whispers who have returned to their normal form. Once they are defeated, Barrett will inflict damage to the main boss. 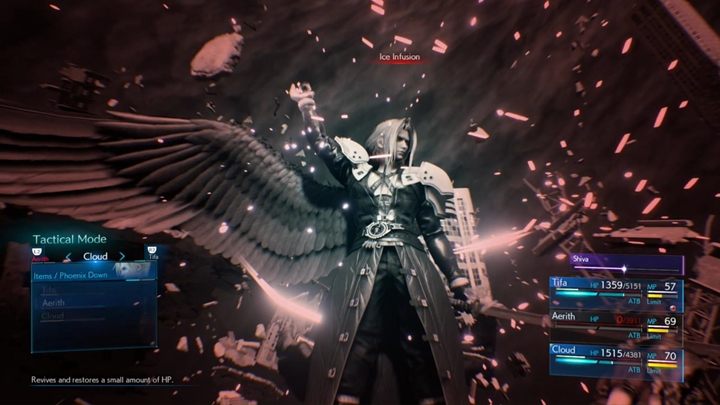 Time for the last boss in the game, Sephiroth. This fight is described in a separate chapter of the guide. 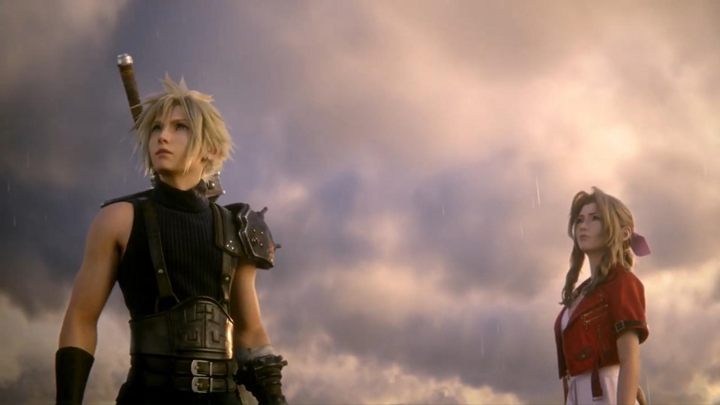 Defeat the boss and watch a few puzzling cut-scenes. This is the end of the first part of Final Fantasy 7 Remake - the last cut-scenes suggest that future episodes will show a different, alternate course of events. You still have some work to do because you unlocked e.g. hard difficulty level and some optional challenges!