The following page of the FF7 Remake game guide includes description of the boss fight against Hell House. This is the opponent you encounter at the Corneo Colloseum in chapter 9 - the Town that Never Sleeps. 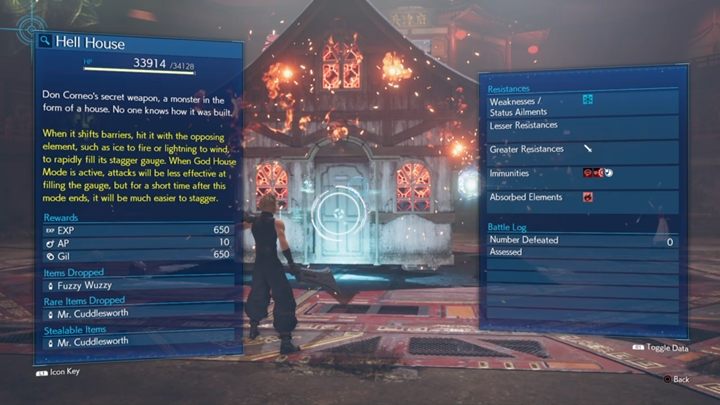 Hell House has 34,128 HP and is vulnerable to Ice Matter. It's a pretty troublesome opponent, especially if you go into the fight without most of the Matter. The best thing is for Aerith to be equipped with a set and a Healing Matter. Hell House is very resistant to sword attacks, so Cloud is not very useful in this clash.

The first round of the battle is easy - the enemy is less mobile and mainly uses rockets. It's a little bit worse when he jumps and uses explosives - block and withhold the attack. Many projectiles can be dodged, but some will hit Cloud anyway. Every now and then the enemy will use the Hospitality skill - he will try to drag you inside to inflict serious damage. You can try to escape as Cloud to a safe distance or use Aerith's Healing on Cloud whilst inside the enemy (he will get a lot of damage when he is spat out). 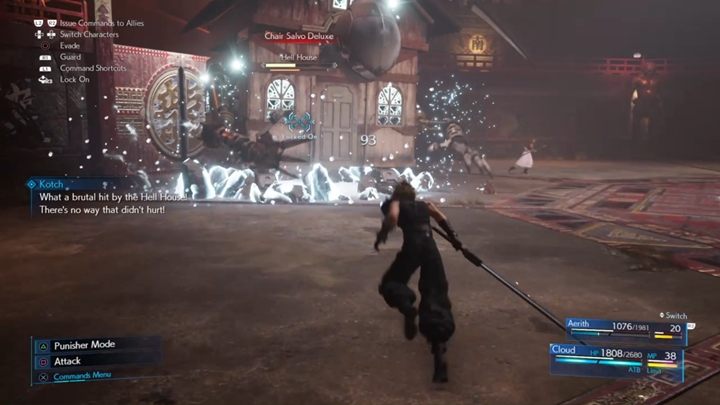 The second round is more difficult because the enemy starts walking and using shields as well as other elements. The enemy can mostly be wounded when Staggered - to hit the indicator, you have to hit the enemy with the matter opposing the one he currently uses. When the enemy is surrounded by lightning-use wind matter (aero). When the enemy inside a green aura, use Lightning matter (Thunders, etc.). When in turn he uses fire attacks and flies - strike with the help of Ice matter (Blizzard, etc.), and when snow appears under the enemy - use Fire matter (Firaga, etc.). As a result, the enemy will receive a lot of damage and be vulnerable to attack.