You meet Chadley for the first time in Chapter 3 - Home Sweet Slum. The boy will ask you to complete certain challenges called Battle Intel. The reward for doing these tasks is e.g. an option to buy new Materia from him. Try completing them on a regular basis. 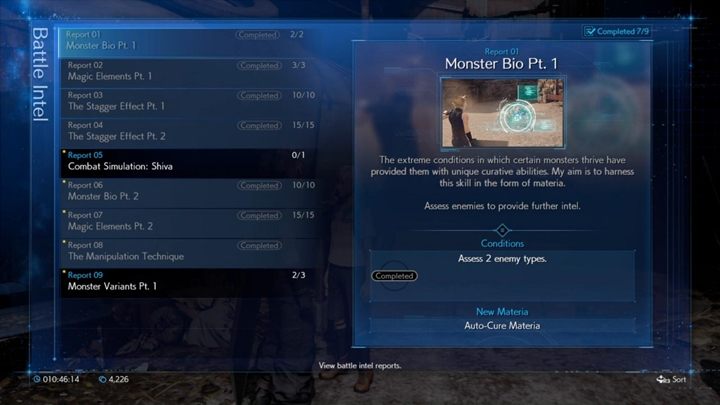 You will meet Chadley from time to time in different cities, so try to do Battle Reports on a regular basis. It is worth adding that Battle Intels can be done in advance - you can start completing steps for various Battle Intels earlier. When you select the next challenges, you will complete them automatically. You will receive new tasks after completing the previous ones. This chapter of the guide to FF7R contains descriptions of all Battle Intels.

Completion conditions: Use Assess on 2 types of enemies.

Comment: This Battle Intel is very easy. All you have to do is use Assess on two enemies. Auto-Cure is very useful for most of the game, so it is worth having it in your inventory.

Completion conditions: Use Fire, Ice or Lightning on three enemies vulnerable to these elements.

Comment: Wind Materia is useful in later chapters, so start leveling it up as soon as possible.

Completion conditions: Use unique skills on an enemy with staggered status and charge the ATB bar 10 times.

Comment: Tifa is perfect for staggering enemies thanks to her fast attack speed.

Comment: An easy task, especially since the game counts the times when you used Assess on previous enemies.

Completion conditions: Defeat 2 or more enemies with a single attack.

Comment: Get a few enemies to have low HP and finish them with e.g. Cloud's Triple Slash.

Comment: Unique enemies are usually encountered during side missions. Try to complete them to finish this report.

Comment: An easy task, especially since the game counts the times when you used Assess on previous enemies.

Comment: Best done when fighting a large enemy that has a long stagger bar. Use Tifa's special skill (triangle in combat) when the enemy is staggered to further increase the bonus.

Comment: Equip any character with Refocus Materia and lead them to a state in which they can use Limit Break - choose Refocus.

Comment: Leviathan inflicts very heavy Materia damage - be very careful. The enemy has no major weaknesses, so you have to focus on normal attacks, healing (Magnify + Healing Materia) and using your own Summon. Powerful offensive spells such as Thundaga also work well.

Comment: An easy task, especially since the game counts the times when you used Assess on previous enemies. Just use Assess on every type of enemy you encounter.

Comment: The list of all weapons can be found in a separate chapter of the guide. You have to equip characters with new weapons and learn their special skills.

Comment: You can quickly improve Materia using AP UP Materia (you get it from mastering Pedometer Materia) from Chapter 14.

Comment: Unique enemies are usually encountered during side missions. Try to complete them to finish this report.

Comment: A very tough fight - Revive Earrings can help with Bahamut's Mega Flare. It is best to start this battle with a fully developed team, use attacks causing stagger, and the strongest Materia.