In this chapter of the FIFA 21 guide, you will learn when you can collect the FUT Champions rewards.

FUT Champions is a prestigious weekend league in FUT 21 mode for the best FIFA 21 players. You have to play 30 matches and depending on the number of matches won, players are assigned to a specific rank. The players who managed to get the Elite rank, reach the TOP 200, or the prestigious TOP 100 can receive valuable rewards. When can you claim FUT Champions rewards in FIFA 21? You can collect your FUT Champions rewards every Thursday at 4:00 a.m. ET and 1:00 a.m. PDT. 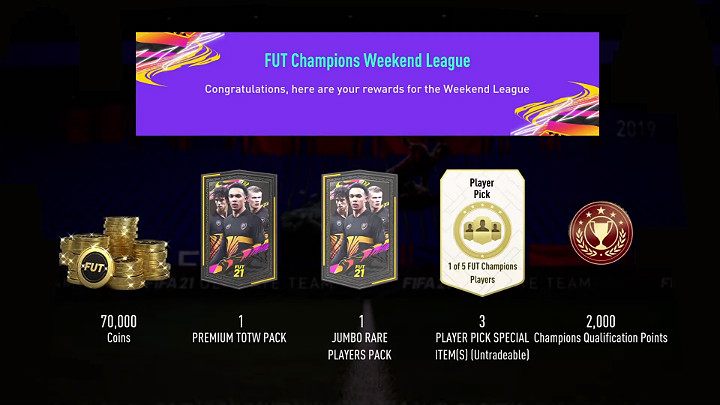 Among the rewards for FUT Champions in FIFA 21, you will find not only Coins, the most expensive packs with players, and a certain amount points to qualify to the next weekend league, but also extremely valuable Player Picks from which you can receive special red cards of players featured in the current Team of the Week (TOTW).

It should be noted here that saving Player Pick for later isn't recommended  these packs will always contain players from the Team of the Week that was active at the time of receiving this reward.