In this chapter of the FIFA 21 game guide we describe all the advanced defensive techniques and suggest how to best defend access to your own goal and take the ball away from the opponent.

Once you have mastered the basics of defensive play, it is worth learning a few more advanced techniques, such as hard shoulder-to-shoulder ball fighting, the Jockey technique or the use of pressing, which will certainly enrich and improve your defensive play in FIFA 21.

Jockey is a brilliant defensive action that limits the opponent's ability to play the ball and thus leaves you more time to react. Jockey has been used in previous editions of FIFA with very good results and is also available in FIFA 21. The proper use of the Jockey technique can be a bit problematic, but it is worth practising and using it at every possible moment. 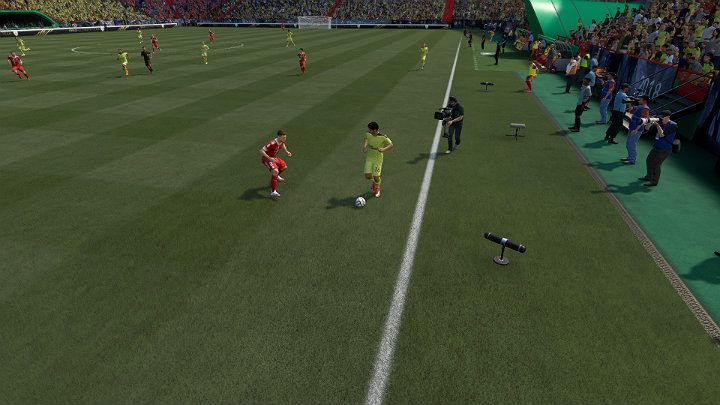 This action not only helps you in a 1 on 1 situations, but also in defense and to predict the passes played by the opposing team and thus makes it easier to capture the ball. The player enters the jockey mode by pressing the button responsible for this movement (L2/LT) and will start to strafe very quickly and change direction on a dime while still holding back the forward.

When you catch up with an opponent who is leading the ball, it will often happen that two players will fight shoulder to shoulder. Such a duel usually ends in pushing, but sometimes a foul can be whistled. To knock the player out of the rhythm, try pulling him by the jersey by using the tackle button, which will slow him down enough to be able to receive the ball in a non-intrusive way. In such a direct fight for the ball, players who stand out in terms of power and aggression do best. 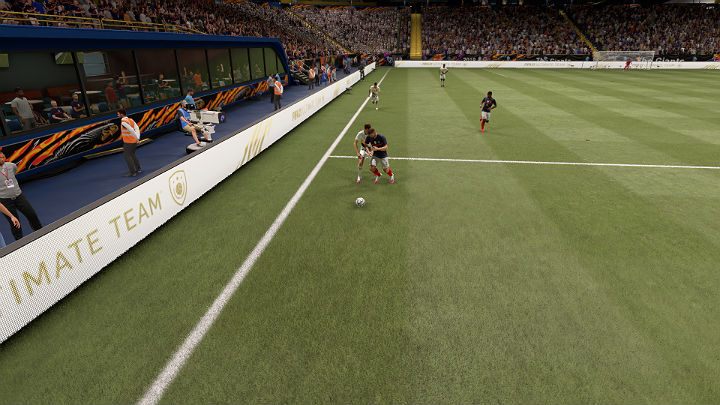 Teammate pressing is one of the ways to effectively interrupt the opponent's action. In this way you will have the opportunity to restrain your opponent, who will probably lose the ball or kick it out of the side line of the pitch. When using a teammate pressing, you have to be aware that a certain sector of the pitch will be left without adequate defence. To ask for help from another player press the button responsible for teammate pressing (R1/RB). 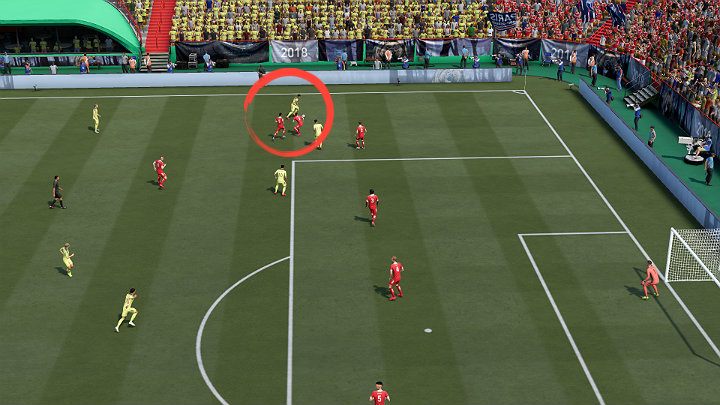 The picture above shows a situation where two defenders have started covering for one player of the opposing team. In such a situation, it will be difficult for him to enter the penalty area with the ball.

Shield the ball is a technique that allows you to keep the ball in play until you receive support from your teammates. This technique can be used when you are unable to perform any action, when you want to get some time and await the final whistle or to give more space to players running behind the back of defenders. To perform a shield, press the button responsible for this action (L2/LT). 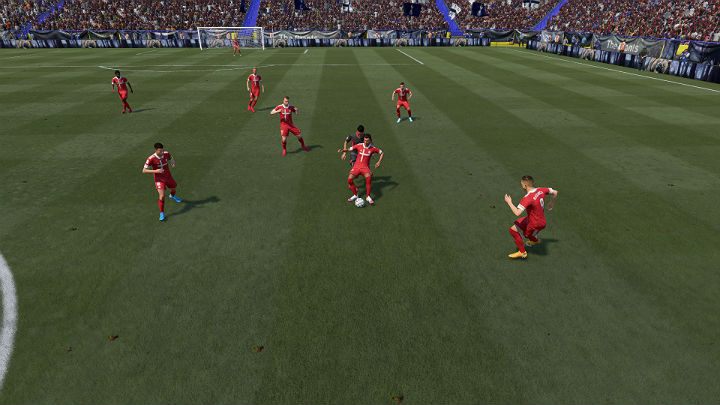 Blocking a shot in the penalty area

During a match in FIFA 21 you will certainly have to block a shot on your own goal many times. You can do this by using the button responsible for the tackle, stand in the line of the shot, and also by making a slide tackle. 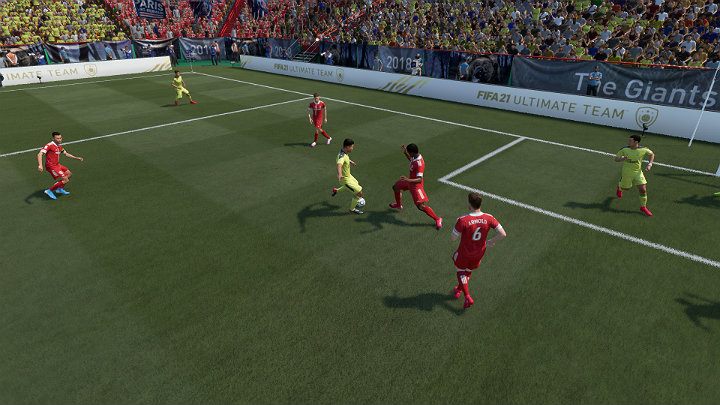 Pressing on the opponent's half

Aggressive pressure on the opponent's half is usually used when there is not much time left and the score indicates that you can lose the match. In that case, the opponent is not in a great hurry to play the ball, so it is necessary to send more players on the opponent's half to try to take the ball. It is certainly always worthwhile to put pressure on the goalkeepers when the opponent pulls the ball back because sometimes they may make a mistake that you can exploit. Remember that after involving players in the pressing, you will leave a large area of the pitch without proper covering, and that all the players participating in this manoeuvre will tire faster. You can switch on team pressing by pushing down button on the d-pad or keyboard and then by pushing right button.