In this chapter of FIFA 21 game guide you will find out what kind of shots can be taken during the match and how to do it best.

In FIFA 21 goals can be scored in many ways, and getting to know all kinds of shots and using them later on in specific situations will certainly result in the number and quality of goals scored by your players.

A classic powerful shot is usually the easiest and best way to finish the action and score a goal in FIFA 21. A regular shot can be taken from almost any position and distance, however, the effectiveness of this shot depends on the precision and the appropriate power with which you kick the ball towards the opponent's goal. To take a regular powerful shot, press the button responsible for the shot and choose the direction in which you want to send the ball. 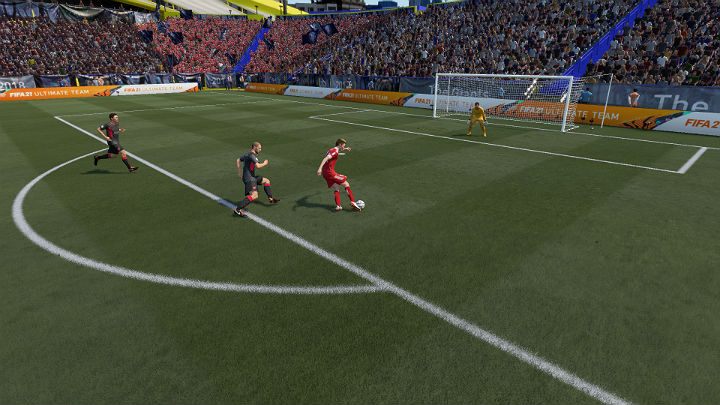 When selecting players for your team to play on attacking positions, pay attention to their shooting attributes: power, finishing, long shot. Also the weak foot star rating is important. If the striker can only shoot well with his stronger foot you will have to remember to constantly move the ball to that foot before shooting.

Timed finishing already appeared in FIFA 19, FIFA 20 and became established, as it also returns in the latest installment of the series. Timed finishing allows you to take a better, more accurate and powerful shot than a normal one. This type of shot is not the easiest technique, as it requires a lot of precision, mastery and timing from the Player. To make a timed finishing, press the button responsible for the shot and then press it again at the right moment. If you have not yet mastered this technique you can help yourself by including in the game options an additional shooting bar which will be displayed over the head of the player taking the shot. Take the shot when the two timing lines are in the middle of the extra shot bar. 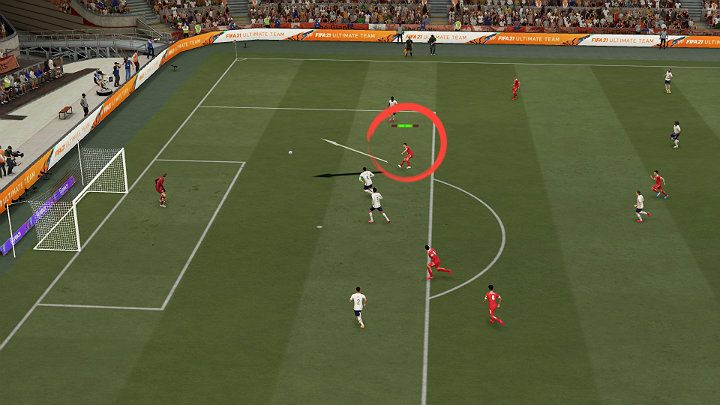 It is important to point out that a timed finishing is not worth using in every possible situation, because the margin of error is really very big. In a 1v1 situation with a goalkeeper or in close-up shots, it is best to use a normal power shot - there is no point in taking unnecessary risks and wasting the chance to score a goal. When taking a shot from outside the penalty area it is best to use a finesse shot.

Once you have logged in to FIFA 21, you will need to enable the timed finishing in the game options as it is disabled by default.

Low driven shots are very difficult to defend for any goalie due to the height at which the football player is above the pitch during the flight. When a goalie tries to defend such a shot, the ball is often paired for a corner kick or knocked right under the attacking players' legs, which creates a convenient situation to finalise the action by striking the ball to the goal. To take a low driven shot, press the button responsible for the modifier and the finesse shot modifier and the button responsible for the shot. 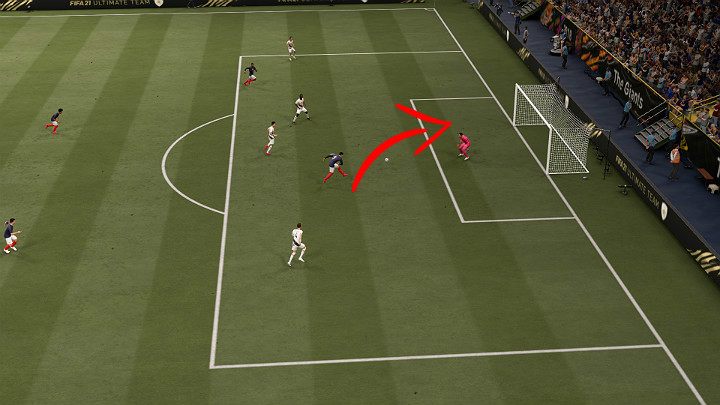 Driven shots are not very precise, so using them correctly will require a lot of practice. It is best to use them to score a goal from about 11 metres and aim at one of the corners of the goal so that the ball fits into the net right next to the post.

A finesse shot, unlike the normal power shot, puts precision over power, so that the kicked ball flies much slower, but can be curled into the upper corner of the goal. Finesse shots are extremely difficult to defend, especially for less skilled goalkeepers. To take a finesse shot, hold down the button responsible for the finesse shot modifier and the shot button and choose the direction. 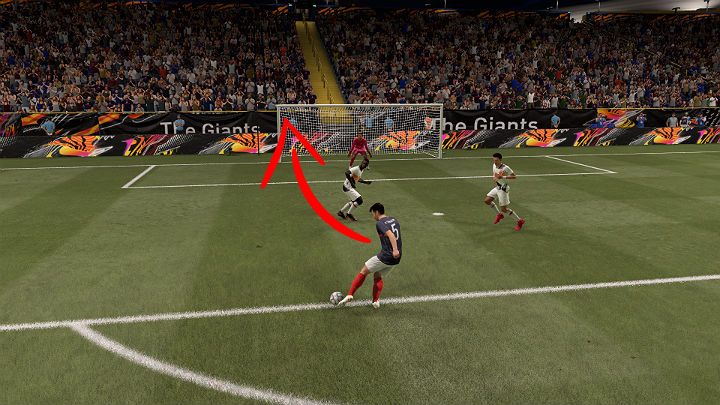 The finesse shots should be made with the athlete's stronger leg if he does not have 4 or 5 stars of the weaker foot. It is an effective way to score a goal from behind the line of the penalty area, as well as in a 1vs1 situation with the goalkeeper or when the goalkeeper leaves the goal line. When doing this, make sure to take a finesse shot with less power than a normal shot.

A chip shot is an action that gives the best results when the opposing team's goalkeeper has gone slightly out of the goal line and tries to dive under the attacker's feet to catch the ball. To take a chip shot, hold down the button responsible for the shot and the modifier and choose the direction. 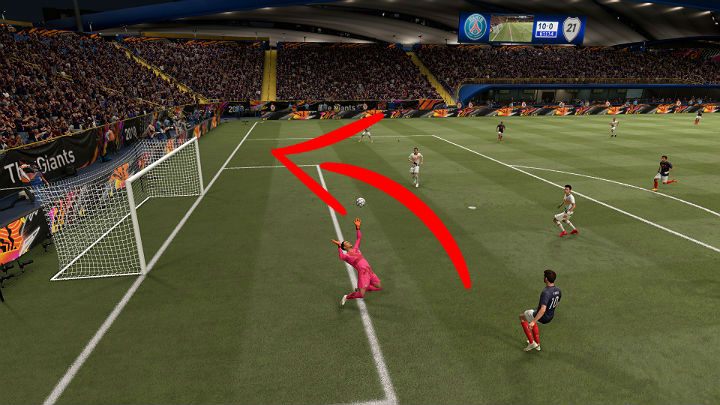 The picture above shows a situation where a goalkeeper has left the goal to make it difficult for the opposing team player to shoot. If he would hesitate and fail to score or pass the ball, he would probably lose it to the goalie. The striker took advantage of the moment when the goalkeeper was far from the goal line and sent a ball over his head straight to the goal.

Taking a bicycle kick in FIFA 21 will depend on many factors such as the trajectory of the ball and the skills of the player. The best time to perform a bicycle kick is when the ball goes about 10-13 metres in front of the goal line and the player taking the shot is not surrounded by defenders. To take a bicycle kick, press the pace control button and shot button and choose the direction. 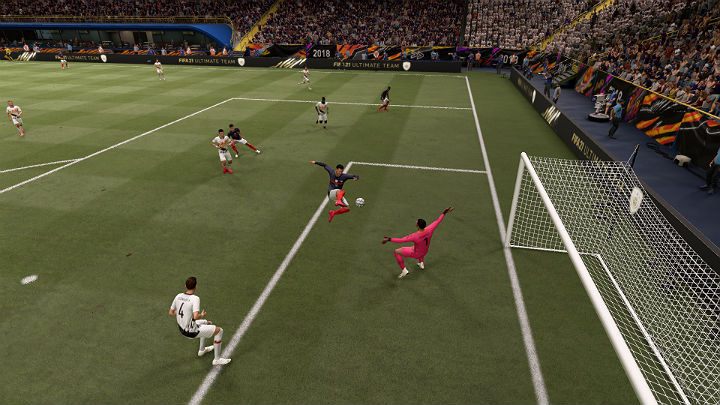 On the above screenshot you can see a situation in which a side midfielder cross the ball into the penalty area using low cross and the striker has taken the bicycle kick right in front of the goalie's nose. This was made possible by the fact that he had previously freed himself from the care of a defender. If the ball flew a little higher, he would probably take a header shot, and if the ball flew higher and went away from the goal he might decide to take a bicycle kick.

When the ball is in the air and at the appropriate height all players in the opponent's penalty area will try to take a header shot. Depending on the height at which the ball is, it may be a classic header or a diving header. A header shot is often the best and easiest way to score a goal after cross, and in FIFA 21 such shots have been significantly improved. To take a header shot, simply press the button responsible for the shot. 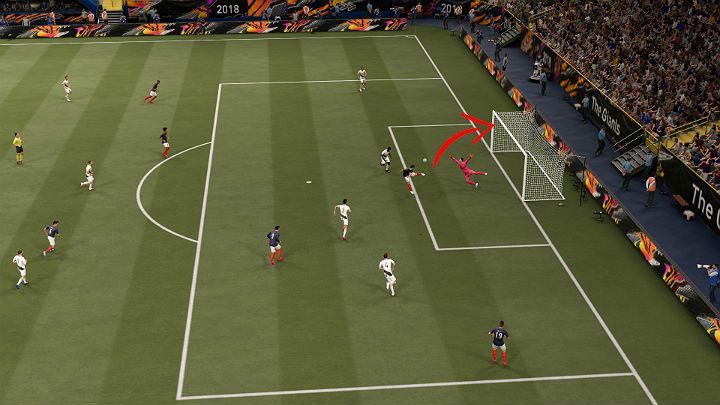 In the picture above, you can see a situation in which a side midfielder cross the ball into the penalty area directly on the head of his teammate, and he takes a header shot in the upper left corner of the goal. The goalkeeper will not be able to defend such an shot because he was defending a closer post. If a player would like to shoot a ball in the lower part of the goal, after the bounce from the ground, it would be enough to press the shot button twice.

When the ball flies towards your player but its trajectory does not allow for a header, he will try to kick the ball before it reaches the ground. Volley is a powerful shot, but also very unpredictable, and technically weaker players may have difficulty taking a good shot when hitting the ball while in the air. To take a volley, simply press the button responsible for the shot. 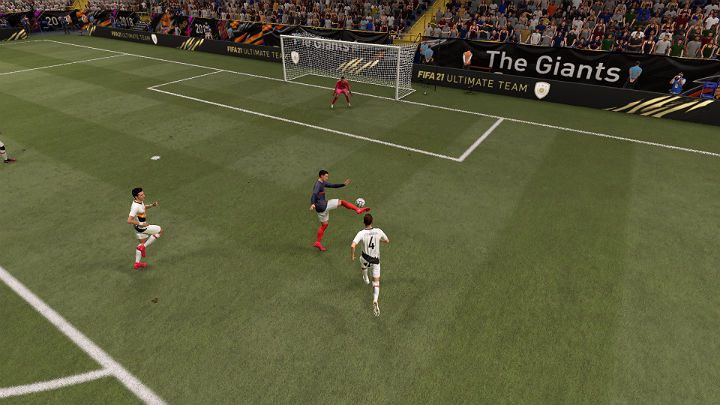 If you wish, you can also create a good situation to shot a volley. Simply raise the ball (by default, press the left stick of the PS or Xbox controller), ideally after stopping the player, so that the ball does not move too far away from him.