In this chapter of FIFA 21 game guide you will find out what types of passes can be made during the match and how to do it best.

It is hard to imagine a real football match without a lot of accurate passes and it is no different in FIFA 21. It is through the thoughtful and efficient transfer of football between players that you can literally tear up your opponent's defence, get under the penal field and create a shooting opportunity.

Passing at a pace

Try to plan your passes and do so at such a pace that they reach their destination without disturbing the action. When a pass is missed and the ball goes behind the player's back, he will have to move back for it and the action will lose its momentum and the rival will gain valuable time to react and organise a proper defence.

Short ground passes are the most commonly used way of playing the ball and getting the action out of one's own penitentiary, and accurate passing is the key to success in FIFA 21. Always target short ground passes to players who are close to the footballer you control so that the rival is not able to take over the ball. To do a short ground pass, press the button responsible for the short pass and choose the direction in which the action should be done. 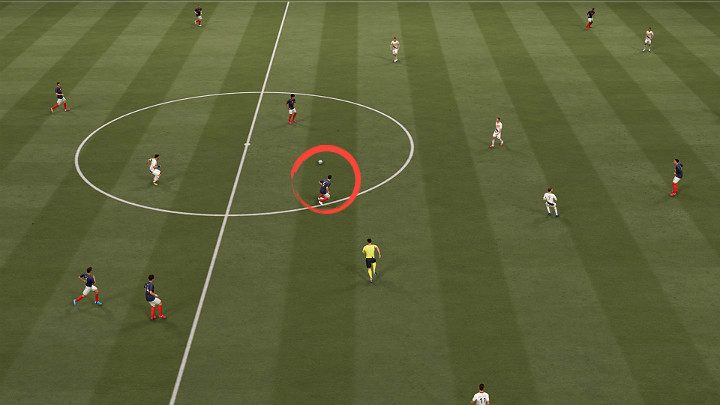 Always do short ground passes with sufficient strength and precision as well as turning towards the player to whom the pass is addressed. Too hard pass can cause problems with the ball, especially for less technically trained players, and in the worst case it will result in the loss of the ball, which can sometimes lead to dangerous counter-attacks.

Long ground passes are used primarily to transfer the weight of the game to the other side of the pitch or as a starting pass for the appropriate player (winger, side midfielder, side defender). To do a long ground pass, press the button for a short pass, hold it a little longer and choose the direction in which you want to play. 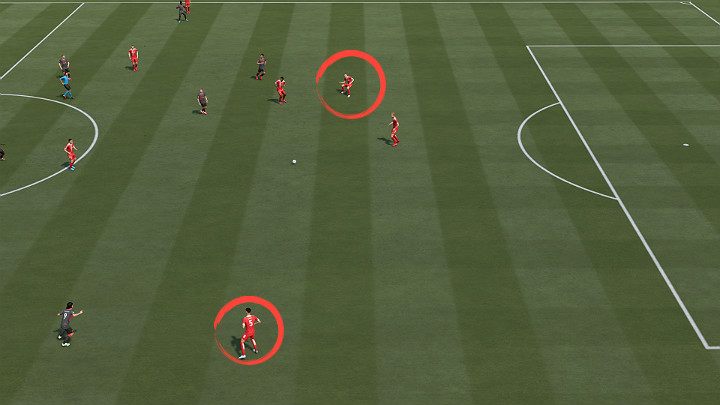 You can see in the picture above that the right side of the pitch has been thickened by the players of the opposing team, which makes it difficult to get the ball out of your own penalty area. In this particular case, a long ground pass to a side defender could have been used, who was just running into the middle of the field to have more space to carry out the action.

Before doing a long ground pass make sure it reaches its target because the long distance between players creates a high risk of the rival taking the ball.

Doing a lob pass is another classic action which is performed in order to transfer the weight of the game to the other side of the pitch. The lob pass is extremely useful when carrying out standard offensive actions or fast counter-attacks. This action allows the ball to be quickly transferred to a sector of the pitch which is less crowded by the opponent, which can open an easy way to the goal. If you want to make an lob pass you will have to press the button responsible for the cross and choose the right direction to send the ball. 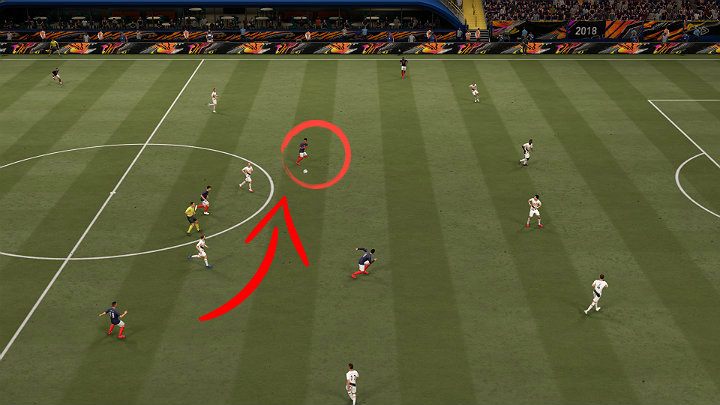 Analysing the situation from the picture above, it can be concluded that if a side midfielder tries to pass a ball on the ground to the player running into the centre of the field, it would be taken over by one of the players of the opposite team. For this reason, it would be worthwhile to use a lob pass.

When doing the lob pass, you must pay attention to the power bar so that it is not too weak, because it can be intercepted by the opponent or too strong, because the ball can fly out of the side line of the pitch. 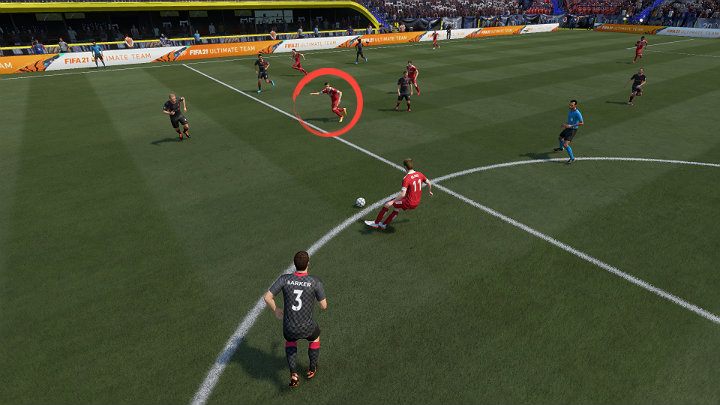 When a one touch football starts, the player who initiates the action will always run a little forward, which is indicated by a quick hand movement in the specified direction.

Be sure to use little power and aim correctly while making the pass.

Through ground pass to the player running behind the defenders' backs is a great way to surprise the rival's defense and a great chance to score a goal. Due to their very high effectiveness in FIFA 21, through ground passes should be used as often as possible. To make a through ground pass, press the button responsible for through pass and choose the direction in which you want to send the ball. 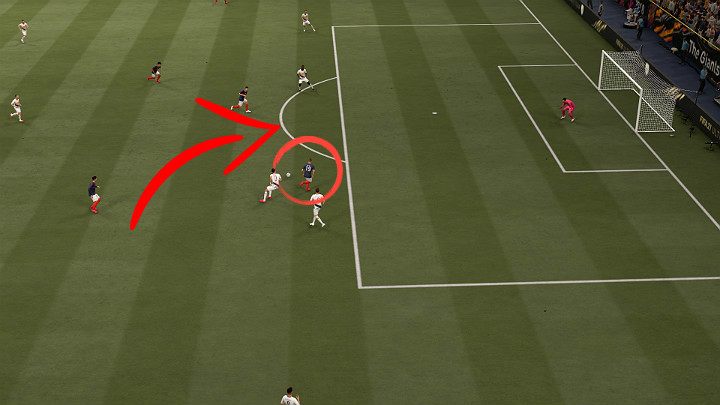 When making a through ground pass, it is important to remember that the power with which you kick the ball should not be too great, because the player will not be able to reach it. This action must be carried out at pace, i.e. when the attacking player is just before the last opponent's defensive line, so that the whole action does not end up with offside.

A lob through pass enables to go past one, or often even two, defensive enemy formations and create a dangerous goal scoring situation. To make a lob through pass, press the button responsible for through pass and the modifier. Also remember to choose the right power and direction to play the ball. 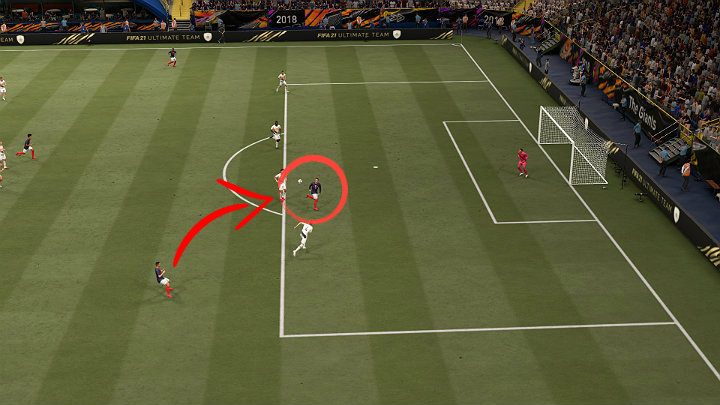 A lob through pass is primarily useful to make a pass in front of or in the penalty area on the running player in order to create a goalkeeper 1v1 situation.

Heel pass is an extremely finesse and often surprising way to play the ball without losing pace. A heel pass is useful, among other things, to withdraw the ball or to play it with another player coming from behind the back of the player leading the ball. To make a heel pass, press the pace control button and the pass button and select the direction in which the action should be made. 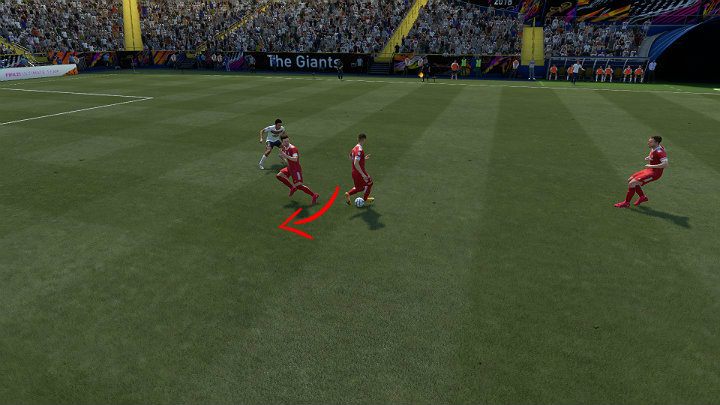 A heel pass can also be used for attacking, but you must remember that your player must be facing back towards the pass as shown in the picture above.