In this chapter of our FIFA 21 guide, you will find out which players were included in the Team of the Week 1 (TOTW 1), as well as who is the best footballer of that ranking.

In the first week of the FIFA Ultimate Team, EA Sports awarded footballers who have shown outstanding form in recent games around the world. The first team of the week (TOTW) this season includes Luis Suárez, who immediately after his transfer from FC Barcelona to Atlético Madrid scored two goals and assisted on another goal in the league match against Girona FC. It should be noted here that Luis Suárez did that in just 19 minutes - he joined the match from the reserve bench. 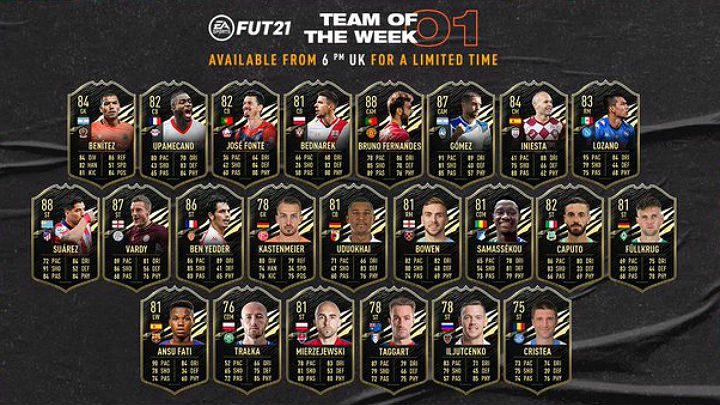 Team of the Week 1 - starting squad

This season's first Team of the Week (TOTW) features many well-known names such as Wissam Ben Yedder or Bruno Fernandes. Besides them, players can also find Hirving Lozano, Jamie Vardy and Iniesta. Below you can find the full list of football players available in the 1st edition of Team of the Week in FIFA 21.

Team of the Week 1 - reserve bench

The best footballer in the first Team of the Week in FIFA 21 is Wissam Ben Yedder, a French footballer who plays as a striker for AS Monaco Football Club SA. Compared to the Gold card, this player's overall score has been raised by 2 points, which means he now has 86 points. The exact price for Wissam Ben Yedder's latest In Form card is not yet known, as the listing came before the official launch of FIFA 21.