In this chapter of the FIFA 21 game guide, you will find out what is the Team of the Week (TOTW), how EA selects the players who get a special TOTW card, and how you can make money in the transfer market in FUT 21.

Each week, EA rewards footballers who have shown outstanding capabilities in recent games on the world's fields in FIFA 21. These players receive a special TOTW card, which has a better overall score and enhanced specific stats. Most importantly, when a special card of a given player appears in FUT 21 (TOTW, OTW, Scream, etc.), his usual card disappears from the pack for all week and if you can pick the right players, you can make a lot of money from that.

Team of the week (TOTW) - How does EA pick players?

EA picks up 23 players each week, who are later assigned to the special Team of the Week (TOTW). How these players are selected is very simple and logical.

Team of the week in FIFA 21appears every Wednesday at 19:00 CET - from that hour players are available in packs. At 18:00 CET, EA's Twitter feed features a graphic of the contestants in the latest ratings. 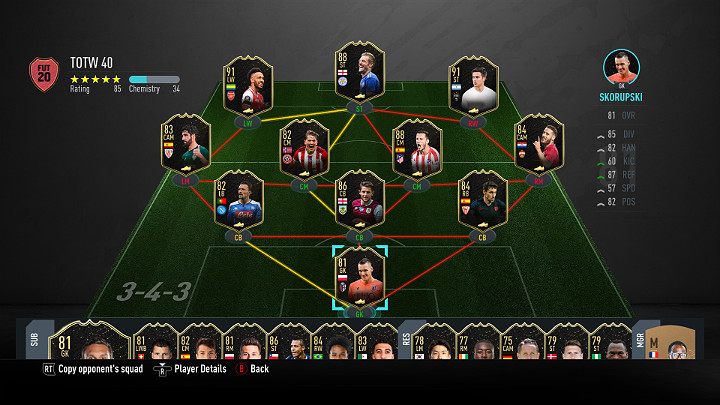 Sample Team of the Week (TOTW)

TOTW footballers - How to make money on them?

Every week, there are plenty of matches played on the world's pitches in different football leagues, so it would be difficult to keep track of the statistics of all the footballers who could potentially be in the upcoming TOTW. Fortunately, with this one tool, this can be greatly simplified.