Card prices on the transfer market in FIFA Ultimate Team mode (FUT 21) in FIFA 21are not fixed but change dynamically and depend on many factors. Note that card prices vary depending on which platform you play on (PS, Xbox, PC). For this reason, it's worth knowing when the cards in FUT 21 transfer market are cheapest and worth buying. When they reach their maximum price, put them up for sale.

Footballers cards in FUT 21 - When is the best time to buy them?

Every week in FIFA 21, the transfer market prices in FUT 21 mode are lowest from Sunday night to Monday, when the next rotation of Squad Battles proceeds and the FUT Champions Weekend League ends - this is the best time to shop in the FUT 21 transfer market.

That is because, by the end of the week, players want to have the best possible squad for the weekend league, but not all of their investments are spot-on. Some footballers do poorly in their teams, some don't fit the players' style, or they've just been used just to get the maximum level of chemistry in the team - there can be a lot of reasons. As a result, once the games are over, they are putting unwanted players up for sale to further strengthen their squad and play another FUT Championship next week. 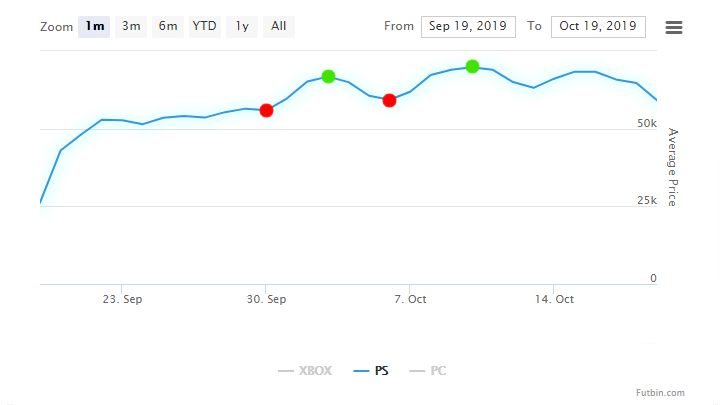 Allan, a Napoli player from an earlier edition of the FIFA 20, will serve as an example. Why was he meta? A great central defensive midfielder, plus a Brazilian who was easily paired with other valuable players of the same nationality but from a different league. On Monday, 30 September, its transfer market price for the PS4 was 55,900 coins (first red dot). On Thursday, 3 October, before the FUT Champions Weekend League, the price of this player rose to 66,700 coins (the first green dot). Then on Sunday night, it was 59,000 (the second red dot) and rose to nearly 70,000 the following Thursday (the second green dot). We were able to use the graph thanks to the courtesy of the people running one of the most popular FIFA game statistics websites - Futbin.

Another reason that card prices are lowest on the night from Sunday to Monday is that players receive prizes won in Squad Battles mode. They are opening up a lot of packages and get a lot of good or even very good players, and the transfer market is going to be flooded with new cards with undercut prices.

After Monday's frenzy, prices are starting to stabilize or rise slightly until Thursday. Then all players participating in the Division Rivals and the FUT Championship will receive their prizes (prize hours vary depending on the time zone) and will flood the transfer market with average gold cards between 75 and 78. This is a good time to buy the players needed to complete Squad Battle Challenges for relatively low prices.

Footballers cards in FUT 21 - When is the best to sale them?

The best possible time to sell good and very good meta cards of desirable players is on the night from Thursday to Friday (until the afternoon hours or so). Perfect examples are Ousmane Dembélé, Allan Saint-Maximin, Sancho, Marcus Rashford, Felipe Anderson, Fred, Nathan Aké, Éder Militao, Sergio Ramos, Bailey, Gnabry, etc. All those interested in participating in the upcoming FUT Champions Weekend League have already got their prizes for Division Rivals and FUT Championship, so now they have plenty of coins to spend and will strengthen their squad before the upcoming FUT Champions. For this reason, the prices of meta cards increase significantly because they will find buyers anyway. That way, they'll reach their maximum price.