I would strongly advise that you remain here for at least 20-30 seconds. There are a few snipers in front of you [#336] and you should get rid of them from here. Thankfully you shouldn't have any major problems locating them even if they move, because they'll be using red laser pointers. Enter this new area carefully. Search your surroundings for sniper ammo and grenades. 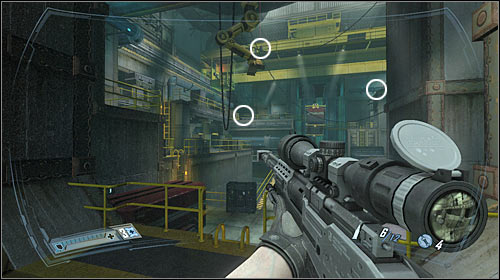 You may now begin moving towards a new huge platform, similar to the one used before. A new sniper should appear to your left, so you'll have to eliminate him as soon as possible. Listen to a radio transmission and you'll find out that you can't start the platform just yet. Instead approach the railing and get to a small balcony [#337]. Take supplies (medkit & armor) and use a nearby ladder. 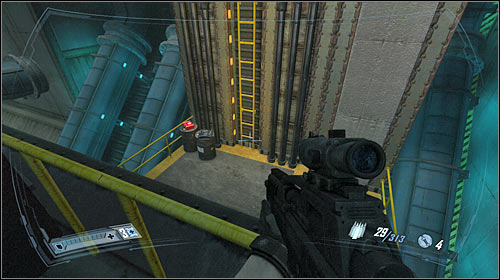 I guess you won't be surprised to hear that more snipers will reveal their positions when you get to the top. Keep moving and use bullet-time wisely to hunt them down. Most of them will appear near the stairs [#338]. Check one of the side corridors for a rocket launcher. You don't have to take this weapon, because you won't be fighting any robots anytime soon. 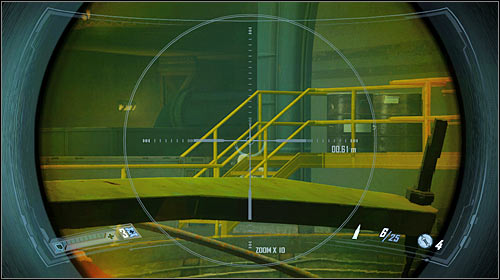 Eventually you'll have to get to a small control booth [#339]. You can spend some time trying to secure this entire area or you can enter the booth right away using a ladder. It doesn't really matter how it's going to play out. Use a new control panel and notice a large container dropping on the platform. Return to the balcony quickly and choose a sniper rifle from your inventory. 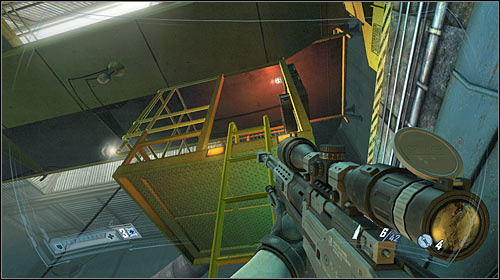 You must now defend yourself against new enemy attacks. Thankfully enemy soldiers won't respawn endlessly and sooner or later you'll get rid of all of them. Monitor the balcony you're standing on but you should also know additional soldiers will appear near the moving platform [#340]. Use slow-motion whenever possible and find a good cover. 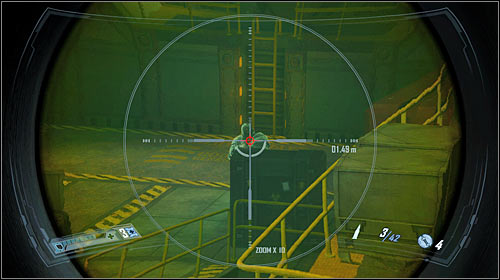 Go to the other end of the upper platform when you manage to get rid of all enemy troops. Notice a small passageway to your right. Go there and eventually you'll find a new armor [#341]. You may go back down. Deal with the remaining enemy troops and proceed directly towards the moving platform. 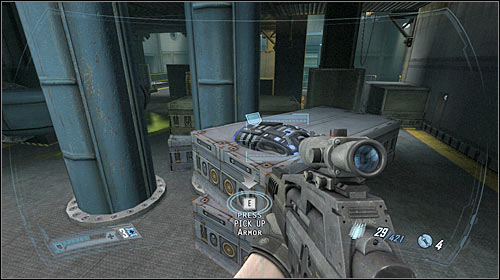 You shouldn't have any problems figuring out what to do next. Use the control panel [#342] to activate the platform. Thankfully this time you won't be attacked by any soldiers. Instead listen to a radio transmission about Alma. Move forward when you get to your destination. You're going to be attacked by the girl, so don't forget to keep pressing the right mouse button rapidly to get rid of her. 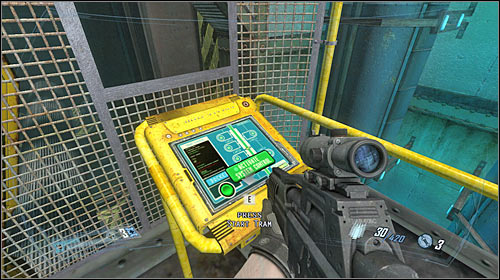