You should be able to get to the stairs. Travel to a different floor and don't forget to collect a new document along the way [#315] - Replica brochure 1. Enemy units are waiting for you just around the corner. You should be using an assault rifle, a sniper rifle or a laser cannon here. Don't forget to throw a couple of grenades at enemy units. Make sure that you've killed all of them and go to the stairs. 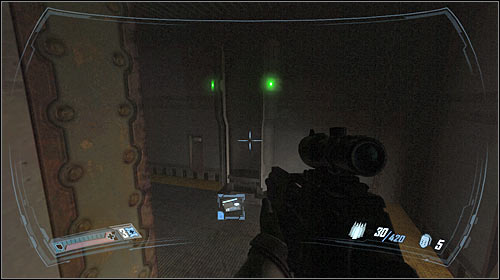 You will finally find your way to the upper balcony. Proceed to a large platform located in front of you [#316]. Find a new document on the ground titled STS guidelines. Explore the area in the search for medical supplies and armors, BUT don't take anything just yet. The main reason is that you may need these items in the near future. The only exception is when you've damaged your current armor badly, but I'm sure it's still in good shape. 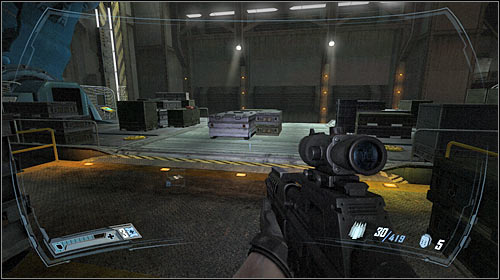 You can start this platform by going to your left and finding a large control panel in one of the corners [#318]. At first you'll be safe here, so you should take this time to familiarize yourself with the layout of the platform. Notice a small passageway to your left. It's closed now, but it will soon open. You'll have to wait for a second platform to arrive in the area and this means you'll have to deal with enemy troops. 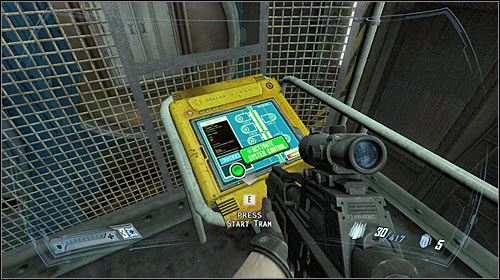 This is going to be the most difficult battle of the entire game. Your job will be to defend yourself for a few minutes. You'll be dealing mostly with distant targets, however some of the enemy soldiers will try getting closer to your position. I wouldn't recommend staying close to the panel, because you would have been trapped there. Instead move to your left. The first group can be found on the opposite platform [#318]. Use an assault rifle or (even better) a sniper rifle to dispose of them. 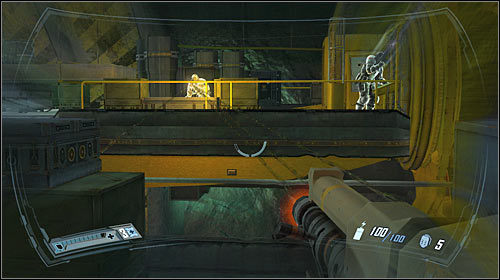 You'll have to be ready for two things. First of all, enemies from the nearby platform will try to board yours and obviously you should prevent them from doing that. Second of all, new hostile units will appear on your platform and they'll use a passageway mentioned before [#319]. I would recommend throwing grenades at them, however you can also switch to an assault rifle or Hammerhead if you have a free moment. 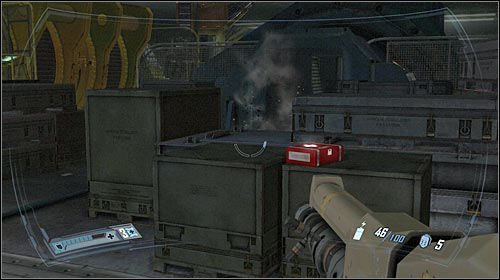 Try to stay as far away from the control panel as possible. Pick up medical supplies and a new armor when you've been badly injured. You will soon hear a warning about an upcoming collision, but you may ignore it for the time being. Notice that new groups of enemy soldiers will use ropes to get to you [#320]. In addition to that some of them will try jumping towards your platform and they'll have to die in the first place. 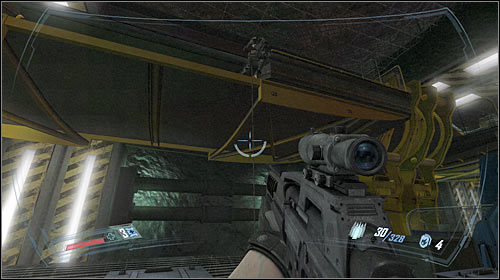 Keep firing at enemy troops and don't forget to look around a lot, so you won't be surprised by any hostile units. Continue using grenades and landmines to defend yourself against enemy attacks. You should also notice that an enemy sniper has appeared to your left [#321]. Kill him before he's able to inflict injuries to your character. Wait for a second collision warning and proceed to a small passageway located near the control panel. 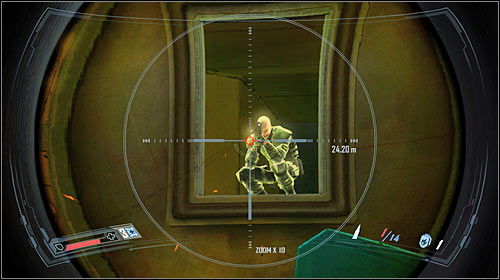