Larger groups of enemy units will be arriving inside a bus located in front of your current position [#151]. Obviously you should focus on killing them before they touch the ground and change their position radically. Also - new enemy soldiers will appear to your right. Thankfully it's going to be much easier to kill them. Make sure to explore the area once you've won the battle. 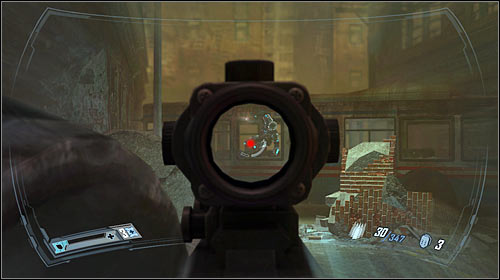 Proceed to the right building (that's where the last group showed up). Find the stairs leading to an upper floor and throw a couple of grenades once you've reached your destination. Deal with the remaining troops using an assault rifle. A new group of enemy units will appear to your left [#152]. Kill them from here before moving on. Explore this room and you'll find two very valuable items - Reflex Injector and a new document titled Powered Armor. 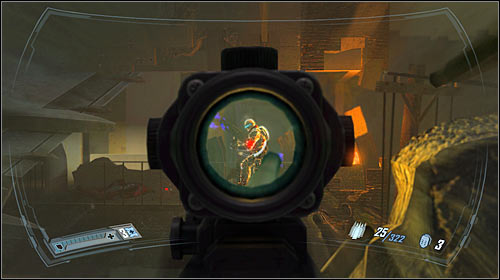 You may now approach a large hole in the wall. You'll have to make two jumps here. The first jump will require you to land on top of a destroyed plane [#153] and the second jump will allow you to get to the balcony of an opposite building. Notice that one of your enemies was carrying a rocket launcher. Exchange this weapon for one of less useful guns. I would recommend getting rid of a napalm cannon. 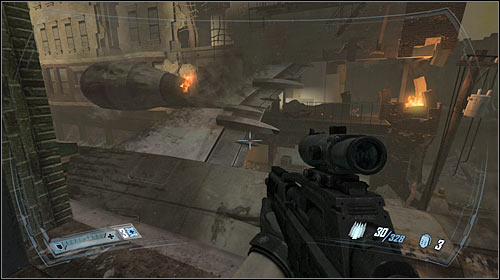 Proceed to the next room. You should be able to reach a room with serious electrical discharges. Obviously you can't proceed before resolving the situation. Aim at the fuse box [#154] and you'll have one problem less to worry about. Go to the next corridor. Take an armor, shock grenades and rockets for your newly acquired weapon. 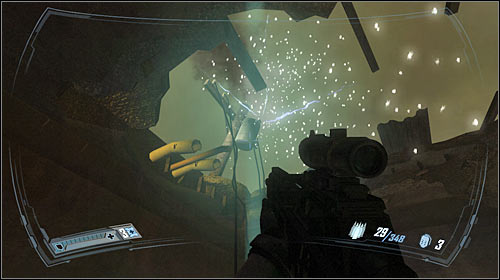 Proceed to your left and find a hole in the ground. Notice a large mech in the background. Don't attack it. Instead see what happens next, because you'll have to copy these moves soon enough. Use your assault rifle to dispose of a soldier armed with a rocket launcher [#155] before he sees you. Additional enemy forces may arrive from the right. Kill them before moving forward. 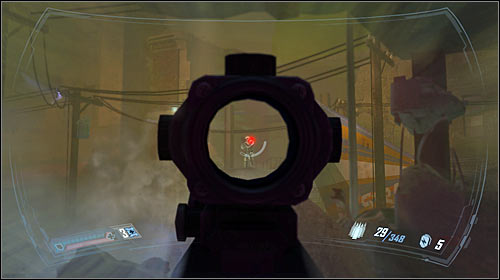 You should now choose a rocket launcher from your inventory. Make a few steps forward and notice that a new machine has arrived in the area and this it'll be up to you to destroy it. The tactics stay the same to the previous "robot battle". Start off by using shock grenades to stun the robot and then keep firing at it using the rocket launcher [#156]. Keep repeating these actions until you've won and don't forget to use cover whenever you're not using your reflex ability. 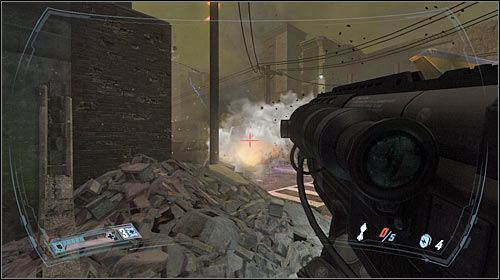 A new rocket launcher soldier may appear on a nearby balcony in the meantime and obviously you must kill him as soon as possible. You should also go there to collect the rockets, especially since it's difficult to find them anywhere else. Electrical discharges are blocking passageway to the next sector, so once again you must destroy a fuse box [#157]. One of enemy soldiers will probably appear near the pond. Kill him and go there. You can also inspect the area for medical kits, armors and grenades. 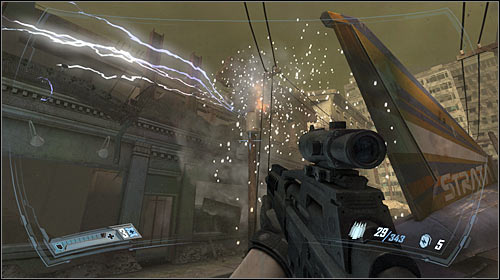