It's very important that you explore a small server room [#72]. The main reason is that you'll find a bonus CD inside - I.M. transcript #2. There are also a few grenades in the area, but you probably have a lot of those in your possession. Proceed to a new corridor. Ignore the restrooms. Instead go to a new room and surprise one of the enemy soldiers. 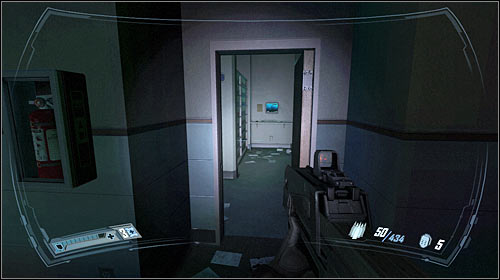 You will witness a lot of strange things from now on. In many cases you will be allowed to ignore enemy soldiers, because they're going to be ripped apart by strange creatures. Proceed to the nearest exit and notice that a soldier has been dragged away by someone (or rather something!). Exit this room and collect his ammo. You should take a look inside the washing machine. :-) Approach the left door, leading to Cleaning 211 [#73]. 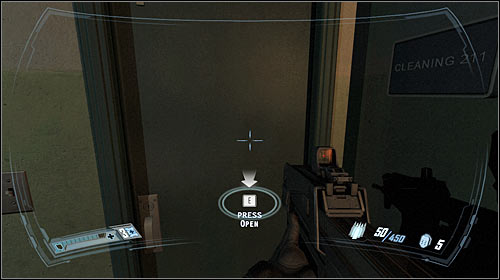 Before you open the door you should choose a napalm cannon or a combat shotgun from your inventory, because enemy soldiers are standing nearby [#74]. Don't leave the room unless it's absolutely necessary and prevent enemy forces from surprising your character. Explore the surrounding rooms, but you won't find many useful items. Find large bloodstains on the floor and proceed to that corridor. 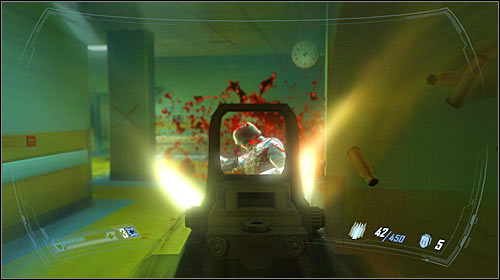 New enemy soldiers are taking cover just around the corner. Prevent them from surprising you and use a shotgun to get rid of them quickly. Go to the Staff Only room and find an exit [#75]. Get closer to the left window and notice that one of the monsters is attacking a soldier. Thankfully you won't be attacked by this beast. 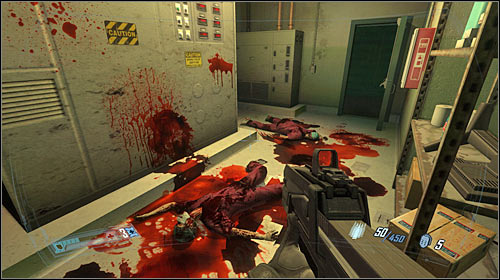 Don't exit this room just yet. Instead focus on exploring the surrounding area. There's a new document [#76] called Op guidelines. You'll find it between two large shelves. Once you've taken the document proceed to the only available exit. You don't have to act quietly here. Find the stairs leading to the lower floor. 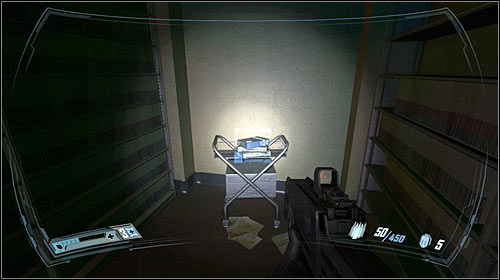 You may take your time exploring the surrounding and you'll find grenades among other things. Proceed to a bloody passageway [#77] and notice new enemy soldiers being attacked by the strange creatures. Wait for one of the soldiers to be killed before attacking his colleague. Collect ammunition once you're done with all hostile targets. You'll soon be attacked by a second group, but it shouldn't pose a great threat. 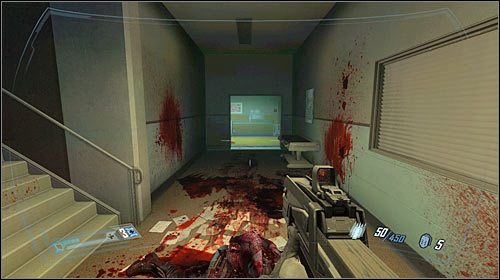 Eventually you should be able to get to a reception area. Proceed towards the elevators. Press the button to call for an elevator, enter it and use a control panel to travel to a different floor. You may exit the elevator. There's a medkit inside this small storage area. Go to the bigger room and notice new weapons in front of you [#78]. Take them and go to your left. 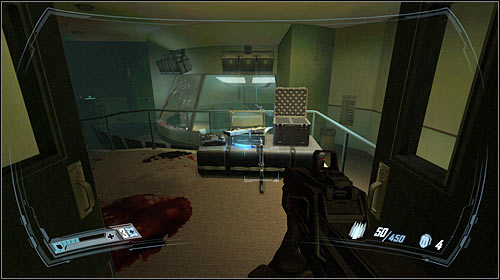 Try getting closer to a large round room and you'll witness a new vision. I'm sure that you'll be more interested in the fact that you're going to be grabbed by one of the creatures [#79] and forced to land on the ground. Make sure that you have a powerful gun as your active weapon, because you'll have to defend yourself against the monsters. 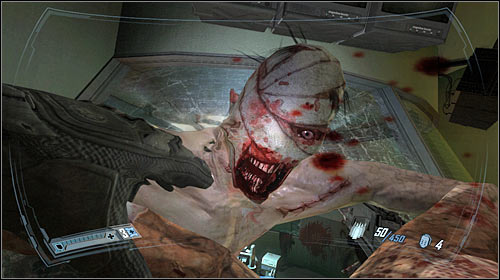