You'll have to watch out for the flames and for the burning objects from now on. Thankfully it's a very easy task, because you'll be allowed to travel to your primary locations without having to worry too much about how to get past them. There's a medkit in Admitting. Once you've taken it go to Nurse, avoid the flames and proceed forward. You will finally come across a large entrance to a ventilation shaft [#64]. Use it to get inside. 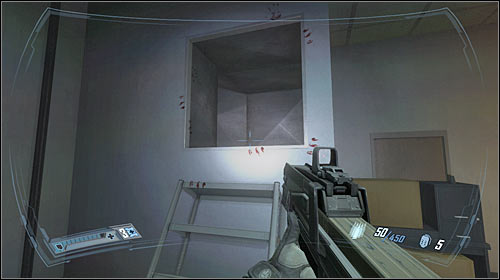 Keep heading forward and ignore the first junction entirely. Eventually you'll get to an exit from the shaft. Head down and take a second to find out what's happening in front of you. Notice that an armored opponent is using a flamethrower to hunt down the civilians. Use grenades to injure him [#65] and travel to your right quickly before he's able to injure your character. Attack him from the front, but prevent him from moving too close or he may use his weapon. 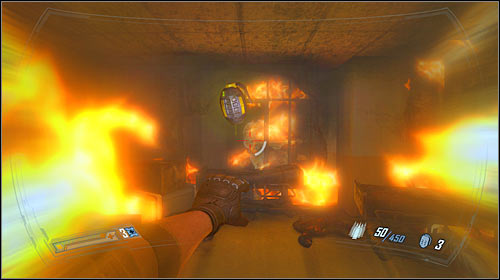 Once you've won the battle take a new weapon. It's going to a napalm cannon which basically works as a flamethrower. Notice that two enemy soldiers have appeared in the area [#66]. There's a large distance separating you from them, so should switch over to a submachine gun quickly. Kill them, but make sure that you don't get too close to the flames. Remain here for a few more seconds. 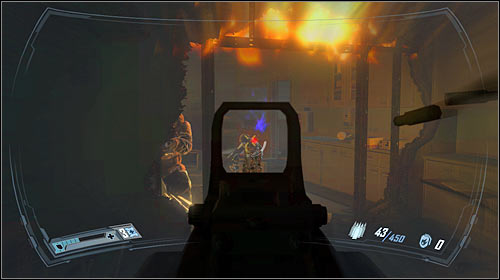 You may go back to the exit from the shaft, because you'll find a medkit there. It shouldn't be necessary as you probably have a lot of those. You should also look for a new armor. I would recommend that you visit the restrooms [#67]. There's a new Reflex Injector there and obviously you should take it. Head on to a passageway located near the killed soldiers. 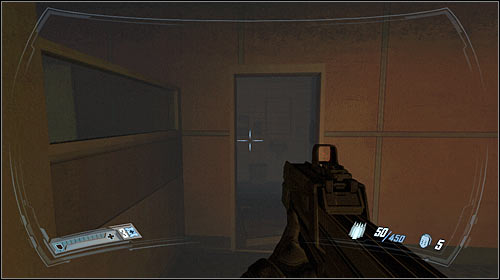 Once you've reached a new room take your time to collect ammunition, as well as incendiary grenades. Keep moving forward and use the bloodstains to find a way to your current destination. There's a new document nearby [#68] - I.M. transcript #3. Take it and proceed to a room to your right. Avoid the flames and get to the only exit. 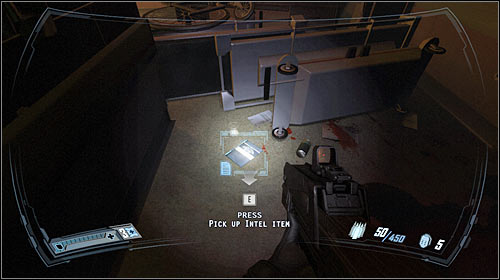 New enemy units are waiting for you just around the corner. Use the grenades to get rid of closest targets and then use one of your primary weapons to eliminate anyone who decides to advance towards your position [#69]. Watch out for some of the windows, because they can't be destroyed. One you've won proceed to the room where enemy troops were stationed. There's a new medkit on the wall. 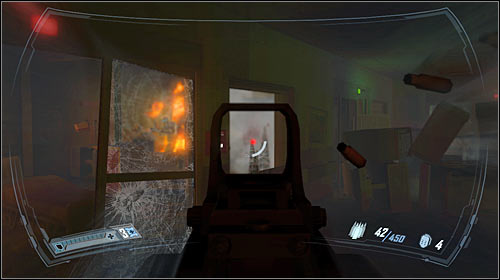 You should be able to find an armor nearby, however I wouldn't recommend taking it right away. The main reason is that you'll soon be attacked by a second group [#70]. Try getting closer to enemy units and use a combat shotgun or a napalm cannon to get rid of them quickly. Once they're gone, proceed to a burning room. Locate a passageway leading to a new area of the lab complex. 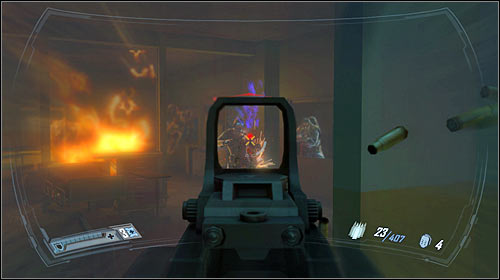 New enemy soldiers will appear in the distance, however getting rid of them should be relatively simple. Keep going straight. Listen to a short radio transmission about Alma and proceed to the nearest door. You'll find yourself standing next to a staircase and you must travel to a lower floor. Go to the left door. Enter a room to your right and get rid of a single soldier [#71]. 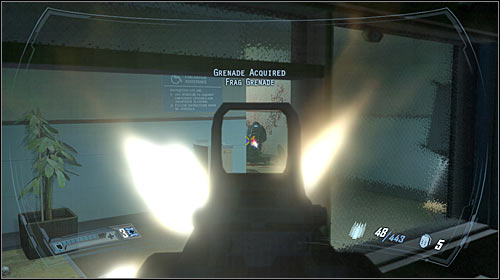