Farming Simulator 19 is a somewhat of a revolution when it comes to the history of the series, as it was built on a new engine. Pleasing graphics and better optimization are the main advantages that distinguish this installment from its predecessors. Physics were also improved, enabling you to experience farming as it should be. The game is characterized by low system requirements and various options that allow us to run the title even on a mid-range PC or a laptop.

A walkthrough of the available graphical options

If the game doesn't run as smooth as it should be, you may need to change the game settings. Enter the game options (accessible only from the main menu) and press space to enter the advanced options. 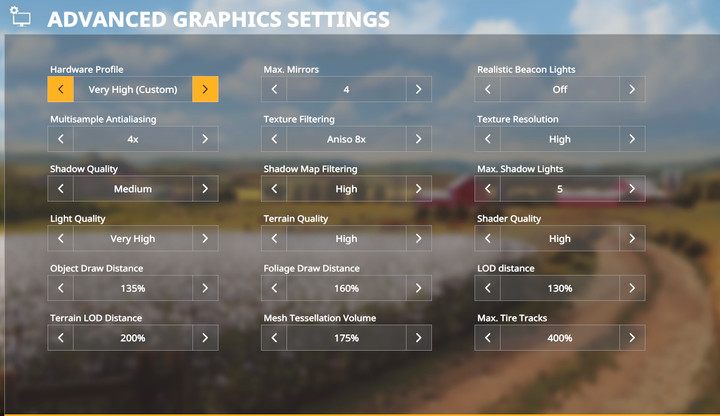 Do not set the draw distance settings to minimum - lowered draw distance means that the objects will disappear and appear much more often, creating unnecessary lags.

How to improve the performance of the game?

The settings such as shadows and lights involve GPU, while the settings that involve the amount of objects or draw distance put a strain on CPU. If you have a low-end PC, consider using a program that analyzes the computer performance on the fly, such as MSI Afterburner. If the use of any of the components is at 100%, expect stuttering. If your GPU doesn't have a lot of memory (e.g. 2 GB) lower the quality of textures and shadows - an overloaded graphics card may cause errors or the game may turn off.

If the game's performance is unsatisfactory, start with setting all options to medium and lower the following options:

Avoid starting your configuration with setting all options to low. If your game still doesn't keep a steady framerate even with all options set to low, consider lowering the resolution (the resolution scaling option greatly influences the performance - if you are without a good graphics card, leave the setting as it is)

The game was played on the following PC:

The author has not experienced any errors during the game; the game is without bugs and doesn't crash.