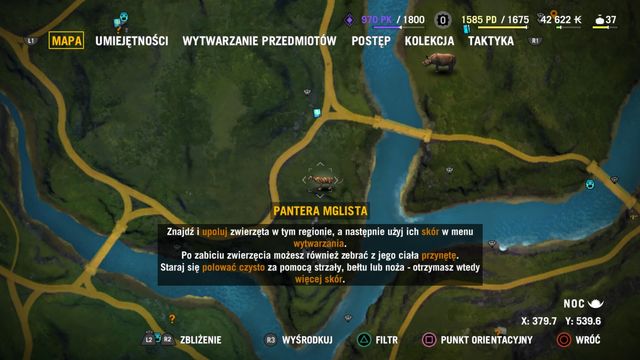 You can easily find the occurrence of every kind of animal on the map.

After you will take over the radio signal in a bell tower you will see many different animal icons on the map. They represent the areas where you can find a specific animal species. These areas are not always reliable since animals often move between places so if you can't find an animal you are looking for you should search the surrounding area or go to a different place with the same icon. Sometimes you can also wait for a few game-hours in an outpost (after the fast travel use a bed) since some species can be easily frightened (mostly by gunshots) and it may be hard to find them after that. The better solution then may be just to give them some time to calm down. 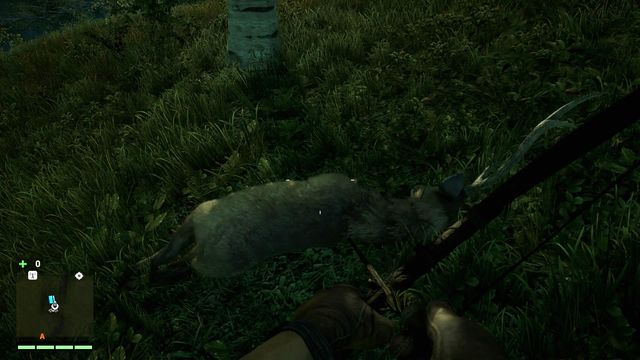 Bodies of dead animals which you can use to collect their skins are marked on the mini-map with a grey "X" mark.

You can interact with every killed animal to collect a bait and a specific animal's skin. You can use a bait to lure a predator. Drop it on the ground and after a short time you should be able to see a new predator around such as a bear, a tiger or a leopard. From the other hand you can use the animal skins to upgrade your items such as the loot bag (you can increase its capacity) or by crafting a bigger bag for the explosives. In the crafting menu you can find out what types of skins and how many of them will you need to craft a new upgrade. When you will collect the necessary items the upgrade option will be unlocked. 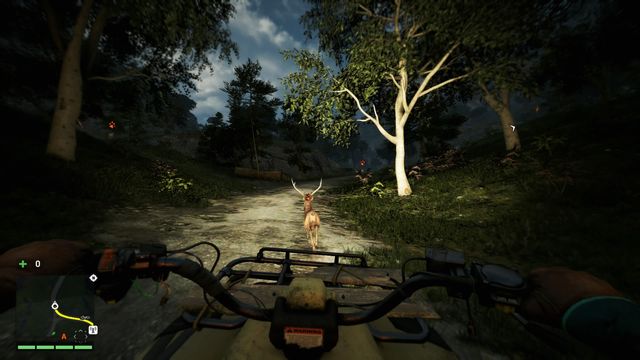 If you can't catch a running animal you can just run over it and then exit your vehicle and without any problem take the carcass's skin.

Animal species (from which you can gain their skins) may be divided into several types:

- harmless and timid - this category includes animals such as pigs, macaques, sambars or bharals. These animals will not attack the player but run away from him instead. They are difficult to kill since, maybe beside the pigs, all of them are pretty quick and may be scared even by a sound of a random gunshot from a long distance. The best solution is to get close to these animals quietly and then kill them from a bow or, as an complete alternative, just to chase them with a car and run over them. If you can't find a specific animal species you may want to craft a Hunting Syringe (with a blue and a red flowers) which will mark all animals for thirty seconds.

- aggressive (smaller sizes) - this category includes animals such as wolfs, dhols, leopards and also the demon fish. These animals will attack the player and may easily kill him. Wolfs and dhols mostly attack grouped and that makes them very dangerous. From the other hand panthers and tigers, even though they attack alone, are also very fast and deal a lot of damage. Hunting on this kind of animals may be more difficult and in some situations it is good to use guns and collect less skins but also survive while doing so. You can also use a bait to lure these animals.

- aggressive (big) - the most dangerous animals around. This category includes mostly animals such as rhinoceros' and bears. They are most durable and trying to hunt them with a bow is pretty much pointless. You need to use a good rifle or even an MMG or grenades (remember to use them to only weaken the animals and not to kill them).

There are also some other animals which you may meet but are not worthy to be hunted. Elephants may be used (after you will learn a specific skill) to ride on them or even to attack your enemies with them. There are also some species (such as turtles or snakes) which you can't get any skin from. 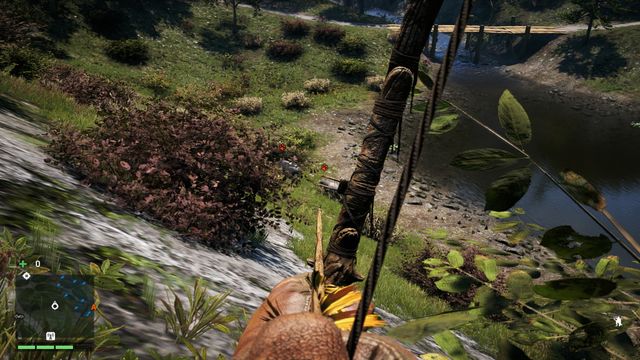 If you want to hunt a timid animal be sure that you will succeed with the first shot.

You can also hunt in several ways. The most beneficial is to kill them in a "fair" fight. It means you need to try not to damage the animal skins what will allow you to collect a skin twice from a single animal and you will receive 20 points of karma. To do so you have to kill an animal with a thrown knife, a bow or your bear fists. The best way is probably to use your bow, especially to catch a smaller timid animals. One headshot hit from a hiding should finish a job. However bigger animals may require something different since if you will fail they will just rip you to shreds. The fair hunting may work if you will try to catch some big cat or dog, although it will not help you a lot if you will try to fight with a rhinoceros or a bear. That's why you need to use at least a rifle to kill them. In sum: try to kill small predators and harmless animals with a clean, fair hunting (you can also drive over a running herds) and don't show any mercy to bigger animals. 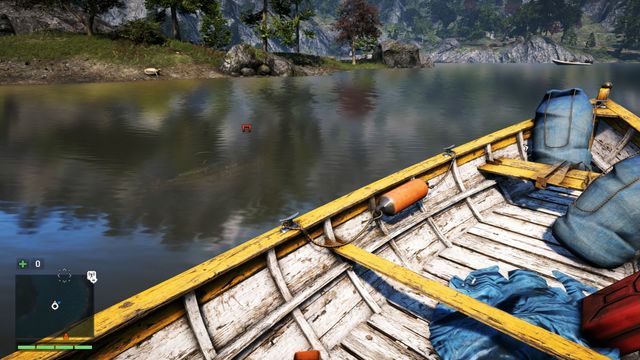 Watching for a fish from a boat is a lot easier when you will craft and use a Hunting Syringe.

A small exception is the hunting for a fish. It's difficult to find a fish from the coast (you may need to use a Hunting Syringe) however if you will succeed you can make a photo of it with your camera and then try to shoot it from a boat or even a coast. After that you need to dive and take care of it under the water. Another way is to just walk into the water and let a fish to attack you. Finally a fish will catch Ajay's leg what will initiate a QTE sequence. Press the right button at the right time to kill a fish and after that you can collect its skin. 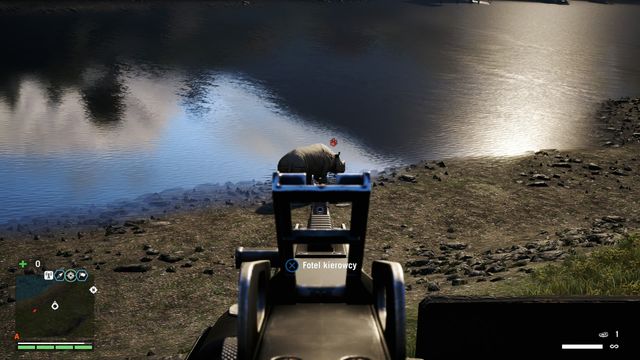 To catch a big animal you need to use a really deadly weapon.

You also need to remember that the animals killed with any explosives or fire will have a damaged skin so their death will not give you any profit whatsoever. The most important is the final blow so it is not bad to weaken the rhinoceros with few grenades and then to finish him with something more conventional such as a rifle. In many cases taking the predator skins is really easy since all you need to do is to have a jeep with an MMG or to use a nearby machine-gun nest. Throw a bait and catch a weapon fast to kill an animal lured by a fresh meet. Thanks to this weapon you will kill a bear or a Bengal tiger without a problem. It may also be useful when you will hunt for a rhinoceros however you need to be careful since they can just turn over your vehicle. In that case run as fast as you can toward water since this animal will not follow you there. 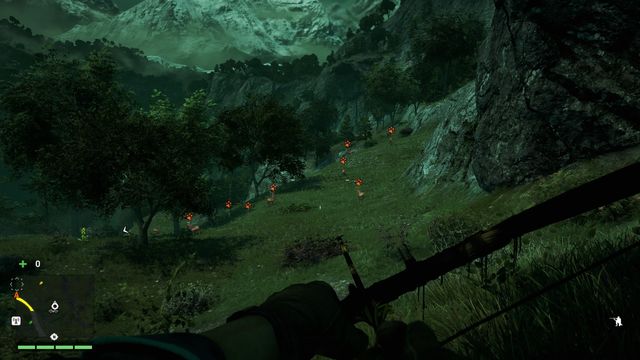 To upgrade your items to the maximum level possible you will need to use a very specific rare skins. You can find them by completing quests from the "Kyrat Fashion Week" series (you can read about it in the "Activities" chapter).