This chapter features a list of all achievements that can be unlocked in Far Cry: New Dawn. Here you will find advice that will enable you to get all trophies. Information about getting harder trophies can be found in separate chapters of the guide.

Some achievements feature a "host only" annotation. It means that in case of cooperation mode only the host can obtain that trophy.

The Meaning of Prosperity

Objective: Help Carmina get back to her mother in Prosperity. Host only.

Commentary: The achievement will unlock automatically after you complete the mission Find Hope.

Objective: Drive with Timber in the sidecar for a total of 5 minutes. Just don't take him to the vet. 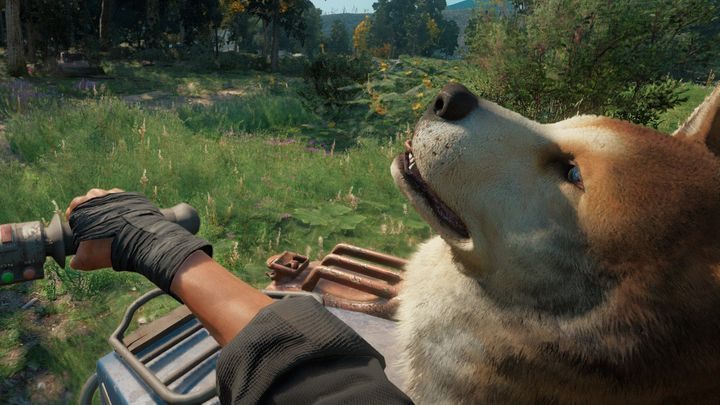 Commentary: After unlocking the dog Timber as a gun for hire, you must drive with him for five minutes in the sidecar. You don't need to get this trophy in a single attempt - the time sums up. When you sit as a driver, the dog will jump next to you.

Home is Where the Part Is

Objective: Upgrade Prosperity's infrastructure for the first time by investing in the right parts. Host only.

Commentary: This achievement is obtained automatically once you upgrade one of the objects in Prosperity with ethanol for the first time.

Objective: Gather 15 plants growing in Hope County. It's the closest thing to a pharmacy we have nowadays.

Commentary: Simply pick up any herbs in Hope County 15 times.

Objective: Loot a Highwaymen Supply Drop. Be careful, it won't be unguarded!

Commentary: While you travel through Hope County, sometimes you will be informed that a supply drop was detected. A special icon with the direction and distance to the drop will appear on the map. In order to get this trophy you must reach the drop, eliminate the bandits and take the cargo.

Objective: Commandeer an Ethanol tanker and bring it back to one of your outposts.

Commentary: When you travel through the roads of Hope County, you can encounter a convoy with ethanol. In order to get this trophy you must hijack the truck. It will require killing the driver. You must chase the truck and shoot the driver. You must be careful - if you hit the ethanol too many times, it will explode.

Objective: Recruit Horatio. Don't mind his temper, he can be pig-headed sometimes. Host only.

Commentary: You will unlock this achievement automatically after completing the mission To Love a Boar.

Commentary: In order to unlock this achievement you must obtain 10 pieces of information from the Wiki-Bean-ia scouts. They can be encountered in every corner of the map. It is easiest to find them in Prosperity or reclaimed outposts. They wear yellow capes. 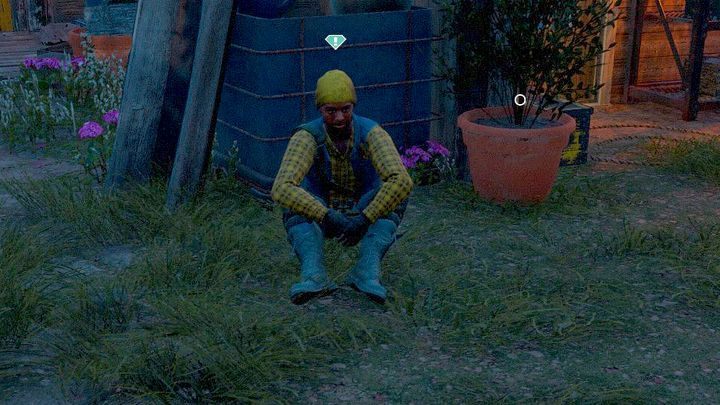 Scouts show you locations of side missions and hidden treasures. After discovering everything, hey will stop appearing. If you found everything on your own, you won't be able to get this trophy/achievement in this playthrough.

Commentary: In the game there are 10 locations related to treasure hunt missions. You must complete at least 3 of them in order to get the trophy.

Information about all available missions can be found in the "treasure hunt" chapter of the guide.

Notes: You need to find 10 MP3 players. Their locations can be found in the walkthrough for Audiophile.

Objective: Recover Grace's prototype gun and welcome her back to Prosperity. Host only.

Notes: The achievement is unlocked after completing Buzz Kill.

Notes: This achievement can be unlocked after activating Lock Picking perk.

Notes: This achievement is unlocked after completing Upgrade Prosperity.

Notes: Weapons can be crafted in any captured outpost or Prosperity. To create a weapon, you need resources.

Coming Up With the Goods

Notes: The achievement is unlocked after completing Deep Dive.

Objective: Help Bean get back his business plan

Notes: The achievement is unlocked after completing Losing Streak.

Objective: Take a short flight in the wingless plane.

Comment: You unlock Carmina plane after The Great Escape mission. Place explosives beneath it to fly upwards. Your character will die, but the game will also unlock the trophy/achievement.

Comment: You unlock this trophy/achievement after completing H.M.S MacCoubrey expedition.

Comment: Throw 3 smoke grenades to unlock this trophy/achievement. You don't have to do that during a fight.

Bring a Knife to a Gun Fight

Comment: To takedown an enemy, you have to sneak from behind and press the right button. You have to use a takedown on 25 enemies.

You can't use a takedown on every type of enemy. Tougher enemies require Takedowns perk.

Have Buddy, Will Travel

Comment: You need to complete 3 Expeditions with another player. 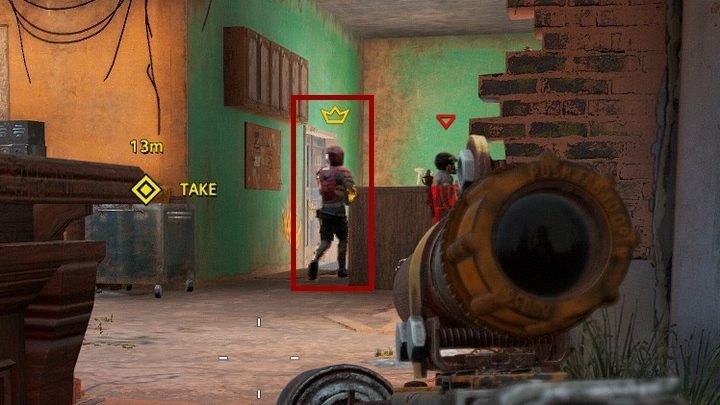 Comment: Enforcers are elite Highwaymen. You can recognize them by a gold health bar and a crown icon above their head. You unlock the trophy/achievement after killing this enemy for the first time.

Goal: Find Sam Fisher's outfit during the expedition to the wreck of a government aircraft

Kill or Be Killed

Goal: Bring Father back to Eden

Remarks: You will unlock this achievement as you go through the main plot.

Remarks: You will unlock this achievement while passing through the storyline.

Goal: Recruit all guns for hire

Remarks: You will unlock this achievement while passing through the storyline and performing side quests. You can find more info about the guns for hire in the chapter dedicated to them.

Remarks: Pretty self-explanatory. You can do this at any time during the game.

Goal: Find all the places with personal photos. Host only. 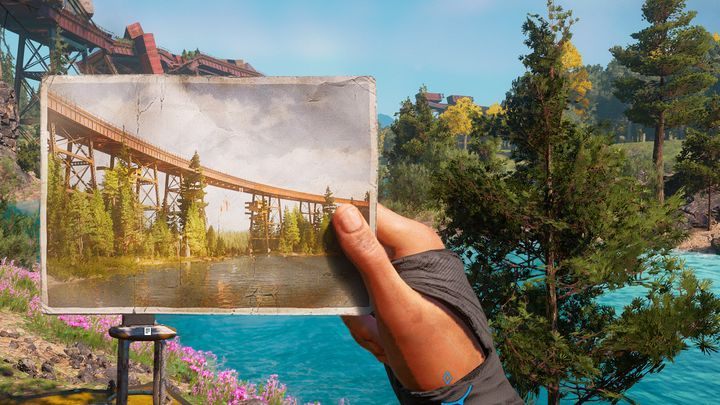 Remarks: You will unlock this achievement after completing the task A Thousand Words.

Goal: Ransack an outpost. Host only.

Remarks: Once you have taken over an outpost, you can search it using the map or the outpost's workbench. It will give you ethanol, but at the same time, it will also make the facility be taken over by the bandits again. You can storm it again. However, you must expect stronger resistance.

Goal: Provoke a new meeting of Nick Rye with Carmina and Kim. Host only.

Remarks: You will unlock this achievement after completing the task Icarus Flight.

Goal: Collect at least one skin from each animal in the Hope County.

Remarks: You will unlock the achievement if you hunt and skin at least one animal of each species that you can meet in the game.

Want to learn more about hunting in the game? Check out the Hunting chapter

Goal: Catch one of each type of fish in Hope County.

Remarks: You must catch at least one fish of each type.

Remarks: This achievement will be unlocked when you have completed all seven expeditions at the highest difficulty level.

If you want to learn more about the expeditions, check out the chapter dedicated to the subject.

Goal: Free a rank 3 outpost, without being discovered by enemies.

Goal: Free all rank 3 outposts at least once

Remarks: Rank 3 of the post will be unlocked only after giving an outpost back the second time. On level 3, you will find 3 alarms that you will have to disarm. If the occupying bandits manage to activate one of them, you will have to fight a fierce battle in which helicopters will also take part.

The End of Eden

Goal: Decide on the fate of Father. Host only.

Remarks: This trophy will be awarded to you as you go through the main quest line.

Goal: Survive a fall from 30 meters, nullifying the damage with just the Leap of Faith

Remarks: Credit for this achievement will require you to find a sufficiently high mountain or jump out of the helicopter. Instead of opening the parachute during the flight, let the character free fall. Press the jump button right above the ground. The closer to the ground, the better. This will you slow down and allow you to survive.

Leap of Faith is an ability that you will be able to acquire only after contacting Children of Eden.

Objective: Kill an Enforcer with a headshot while using Piercing Ammo. 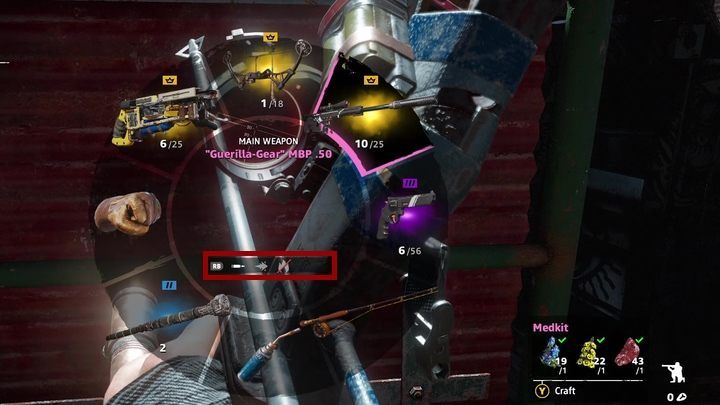 Commentary: Piercing ammo can only be used while wielding a sniper rifle or a rank III or elite semi-automatic rifle. You can change the ammo type by using the weapon wheel. You must simply press the correct button.

Commentary: You cannot create a shield yourself, you can only take one from a fallen opponent. After picking one up, you can throw it at an enemy in order to deal damage. Unlocking this achievement requires killing five foes with such a shield throw. A single throw will not kill an enemy outright. That is why you must have a sidearm at your disposal, which you will use to weaken your opponent.

Objective: Unlock the first level of all perks.

Commentary: Unlocking this achievement requires you to purchase all of the perks that are available in the game for the cost of perk points.

Objective: Upgrade a perk to level 5.

Commentary: Some of the perks, mostly those connected to the equipment capacity of your character, as e.g. More Medkits, can be upgraded. This achievement will be unlocked once you upgrade one of these perks up to level 5.

Commentary: Brawlers are bandits with shields. You can encounter them while exploring the world. The easiest way to find them is to clear outposts, especially on levels II and III. Unlocking this achievement requires you to kill 10 enemies of this type with a saw launcher.

Objective: Craft your first legendary weapon or vehicle and thus start a legend of your own.

Commentary: Creating one of the highest quality items requires you to have a fully upgraded Vehicle or Weapon Workbench.

Objective: Kill an enemy located more than 100m away with an ordinary arrow. 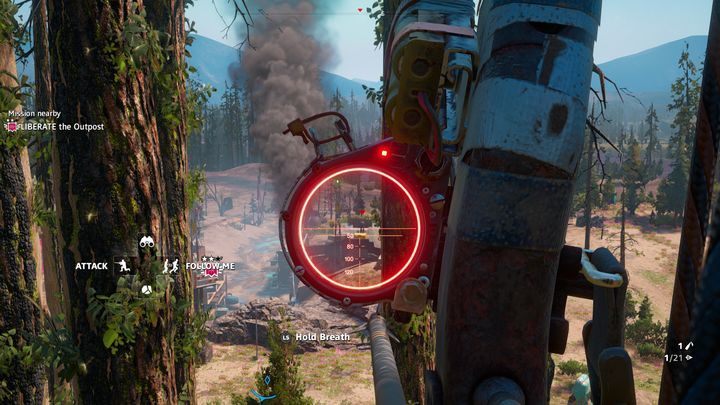 Commentary: To unlock this achievement you will have to equip yourself with a long-range bow. The best places to acquire this achievement are the outposts seized by bandits, which are located in the vicinity of the hills, e.g. Broken Forge or The Watering Hole. Stand on a hill roughly 100 meters from the outpost and aim at one of the bandits who are in your line of sight. You must remember, however, that you have to aim a little above the target so that the arrow reaches its mark.

Objective: Eliminate 10 foes within the timeframe of a single activation of Wrath.

Commentary: Maintaining Wrath for long enough will require you to also possess the Eden's Touch talent. The only way to unlock this achievement is to attack an outpost, preferably one with the highest level of difficulty. Only there will you be able to slaughter the right number of enemies within the relatively short time.

Objective: Execute an aerial takedown right after a Leap of Faith.

Commentary: You have to execute a double jump towards an enemy and then press the elimination button at the time of your landing.

Get to the Point

Objective: Kill an Enforcer with a bayonet. 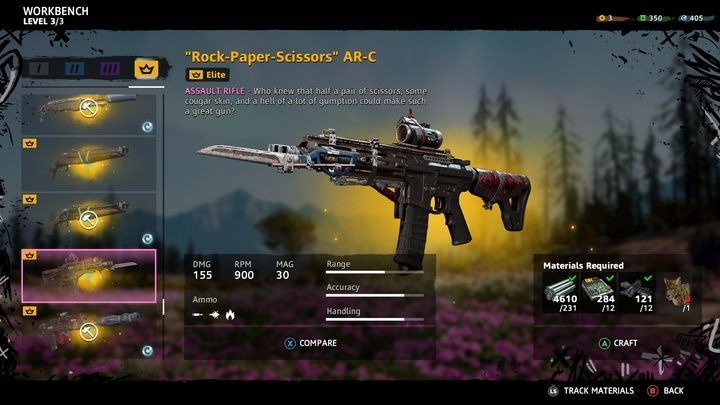 Commentary: To unlock this achievement you will have to equip yourself with a weapon that has a bayonet. It is possible to deal blows with this type of weapon by pressing the melee attack button once you have the relevant rifle equipped.

Objective: Build all of the available infrastructure upgrades.

Commentary: This achievement will be unlocked once you fully upgrade all of the structures in Prosperity.

Objective: Knock off an enemy's helmet with a charged melee attack.

Commentary: Helmets are usually worn by level two enemies. To execute an attack that has sufficient force, you will have to hold down the melee attack button.