This guide to Far Cry: New Dawn contains descriptions of all the gameplay elements of this game. You can find a walkthrough for every mission. We have included starting tips for beginners, maps with locations of hidden treasures and hunting grounds. The guide also includes information about side activities - fishing or collecting crafting resources.

Far Cry: New Dawn is another installment of the popular FPS series by Ubisoft. For the first time in the series' history, the developer has decided to make a direct sequel.

New Dawn takes you back to Hope County known from Far Cry 5 - or to what was left of it. The rest of the land is radioactive. The game takes place seventeen years after Far Cry 5. You play as your own character and your goal is to face twins - Mickey and Lou. They are the leaders of Highwaymen, a group of bandits that have raided the county.

The gameplay in Far Cry: New Dawn is based on the same mechanics as those used in the previous titles from this franchise. The game is an open world FPS. Besides the main missions, Hope County also has various side activities such as capturing supply convoys or treasure hunting.

Of course, the game has a few changes. For the first time in the franchise, players can participate in Expeditions. These missions take place outside Hope County, and our goal is to get supplies from the bandits. In Expeditions, you will visit various places of postapocalyptic America - from an abandoned amusement park in Florida to the Alcatraz prison.

The second new feature of Far Cry: New Dawn is taken from RPGs. Depending on their level, enemies will use different gear and have a varying number of health points. Weapons and vehicles are divided into four levels, too.

Markings used in the guide

Our guide to Far Cry: New Dawn uses color markings to distinguish locations, abilities, and characters. Below you can check what each of the colors means:

The first chapter focuses on starting tips. Here, you can find various tips for beginners as well as pages dedicated to the game's basic gameplay mechanics. Learn how to hire companions, how to capture outposts, or how to upgrade your base. The page dedicated to crafting can also help you - check it if you want to learn how to craft items and get crafting materials.

The FAQ section serves as a supplement for the starting tips section. We try to answer frequently asked questions and provide you with solutions for any possible problems with the game. How to get perk points, how to open doors and safes, or how to unlock a grappling hook - these are only a few of the questions we have answered in that chapter.

Far Cry: New Dawn features several side activities. Expeditions give you a chance to get a lot of resources. Capture enemy trucks and deliver them to captured outposts to get ethanol. You can also check out fishing and hunting. The game also lets players to hunt for hidden treasures.

This chapter contains locations of the most important places in the game. Here, you can learn where you can look for outposts and hidden treasures. You will also find places presented in the photos that are part of A Thousand Words quest. The maps with animals and fish will show you the best places for getting skins and fish.

Far Cry: New Dawn also offers players a few side missions. Usually, they are related to various collectibles - hidden treasures or places presented on photos. Our walkthroughs will help you discover all the secrets.

This chapters contains the list of all achievements/trophies available in Far Cry: New Dawn. Some of them are challenging - our descriptions will help you get them. Check this list to learn how to complete Far Cry: New Dawn in 100%?

Below you can find system requirements for Far Cry: New Dawn. 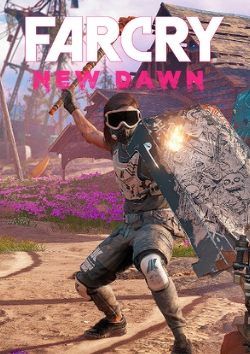 Far Cry: New Dawn is another part of the best-selling FPS series, made by Ubisoft. For the first time in the history of the cycle, the developers decided to create a direct continuation of the previous production from this signboard - in this case Far Cry 5.

Action game Far Cry: New Dawn takes place after the events presented in the Far Cry 5. Seventeen years have passed since the nuclear war, of which North America, among others, was a victim. The nuclear winter has already receded, and it was followed by the so-called "super bloom" - the earth is overgrown with dense vegetation, especially colourful flowers.

During the game we get to the postapocalyptic version of Hope County. As a self-created heroine or heroine, we have to deal with an army of dandruffers called Highwaymen, which travels all over the country (or rather what's left of it) and is headed by two black twins, Mickey and Lou.

The protagonist can use the help of allies, among which there are inhabitants of the Prosperity settlement, which is his base, as well as the Akita dog named Timber or even an overgrown wild boar - Horatio. Pets, just like sniper Nana, feed the ranks of the so-called "guns for rent".

Far Cry: New Dawn does not differ from the scheme developed for the previous parts of the series. Once again we receive a shooter with an open world, where we can move on foot or at the controls of the vehicle. It is worth noting that only a part of the map from the Far Cry 5 is available, as the rest of the county still has a high level of radiation.

In addition to pushing the action forward, during the game we perform side missions and take part in a variety of optional activities. One of the latter is deflecting enemy posts that can be seized or only plundered (if we decide on the latter, the bandits will return to such a place and fortify them anew, which will make the next attack much more difficult). The game also does not lack accidental meetings (although there are a little less of them than in the Far Cry 5), animal hunting or even treasure hunting. In addition, production allows us to set off with an expedition to other parts of North America on board a special helicopter; thanks to this we can visit, among others, the Great Canyon of Colorado, where enemies also have their fortresses filled with supplies.

Due to the fact that the game world is full of dangers (individual opponents appear here in several variants differing in terms of look, endurance and firepower), an extensive arsenal including machine guns or a unique crossbow shooting with sharp shields has been placed on our armoury. The fun is diversified by crafting, which plays a greater role here than in the previous parts of the series. Raw materials obtained during our voyages can be used not only for the improvement of existing weapons, but also for the improvement of the settlement, provided by the so-called specialists. Resources are also required for the use of vehicles (headed by a helicopter).

As with the fifth installment of the cycle, Far Cry: New Dawn can be played alone or in the company of a second player as part of a cooperation mode.

Far Cry: New Dawn is based on the proven Dunia Engine technology. The three-dimensional graphics of this production presents a quality similar to that of Far Cry 5.