On this page of the Far Cry 6 game guide, you will find a walkthrough of the Yaran Story titled The Seeds of Love, a side quest from the El Este region. Our guide describes how to unlock the letter distribution mission and where to find all 7 descendants of Lorenzo Canseco. 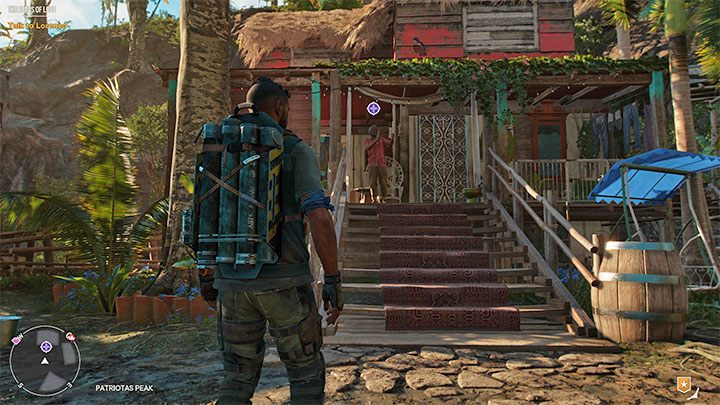 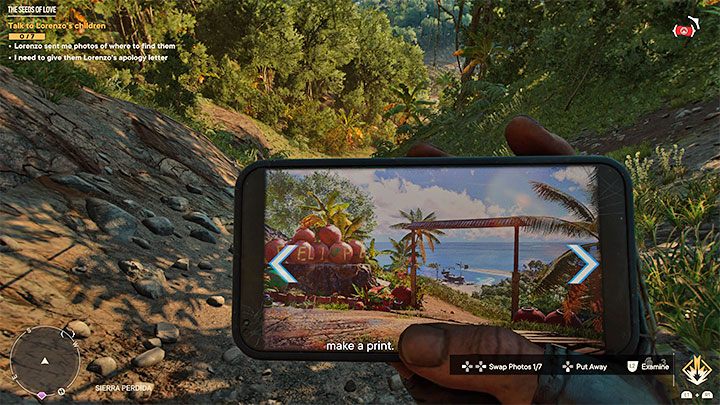 The opportunity to start this side quest comes after completing The First Love Yaran Story. You must meet Lorenzo Canseco at Patriotas Peak camp. You will be tasked with finding 7 of Lorenzo's children to give them letters of apology.

The game will not tell you the exact locations where to look for the descendants and you will only receive pictures with hints as to their whereabouts - they all reside in the El Este region. You will find information about their location and requirements to talk to them in the following subsections. 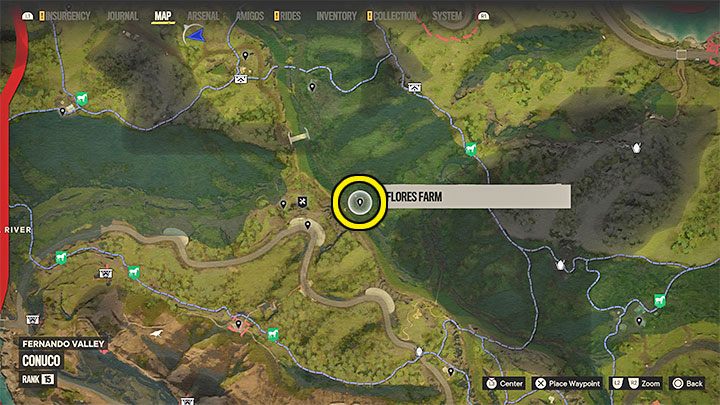 Reach Flores Farm located in the central part of the Conuco sub-region - the location is shown in the attached screenshot. 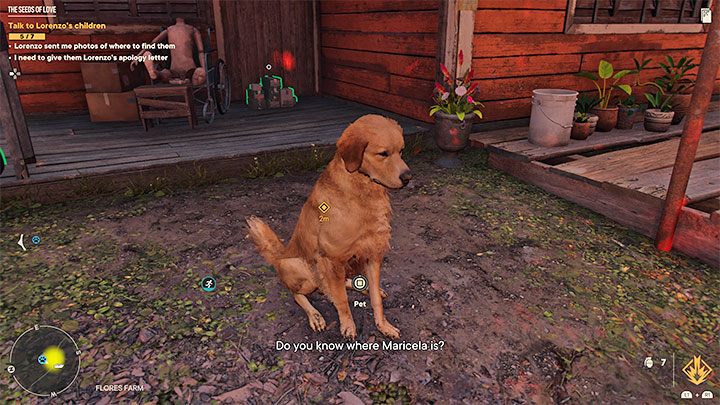 You will meet a dog in front of the entrance to the farm building. Pet it and start following it. It is best to walk with your weapon concealed so as not to provoke any passing soldiers into a fight. 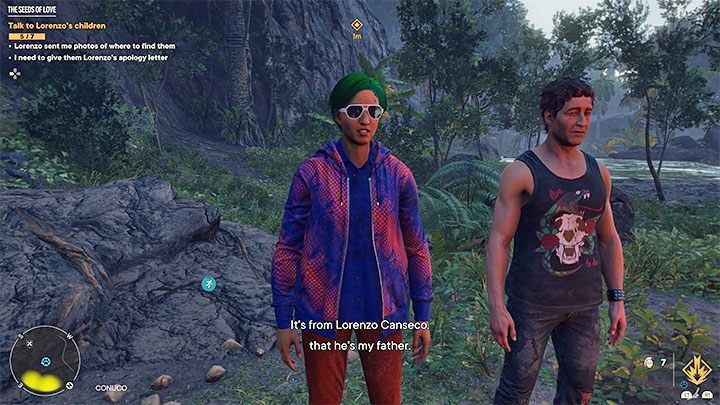 The dog will lead you to the encampment where Marciela and Pedro are staying. Give Marciela the letter. 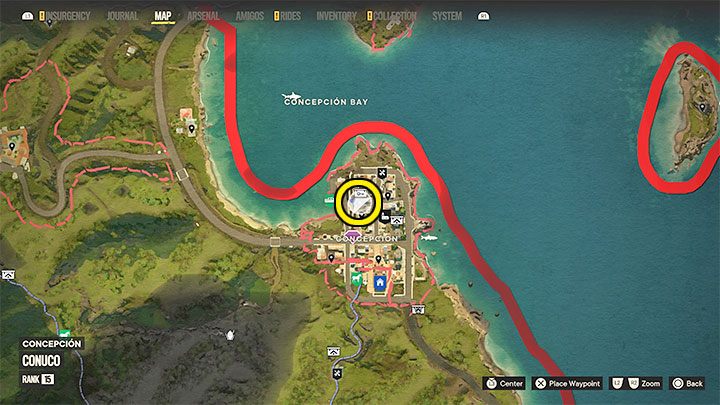 Reach the town of Concepcion in the Conuco sub-region, and go to its western part marked in the screenshot. You should know the town well, because one of the guerrilla hideouts is also in it. 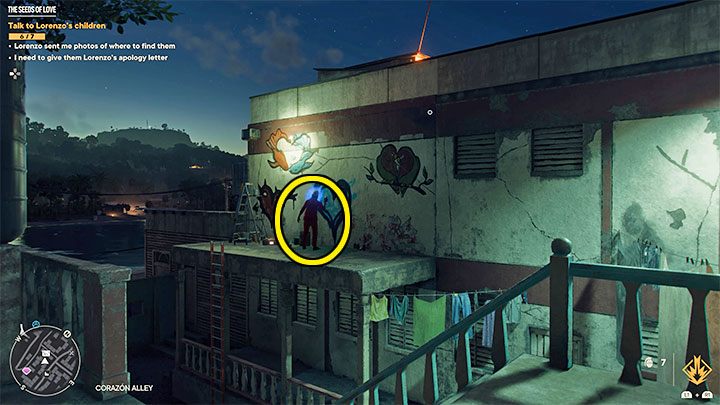 Xiomara will be busy painting graffiti on one of the walls, as in the above screenshot. Use the ladder to reach her and hand her the letter. 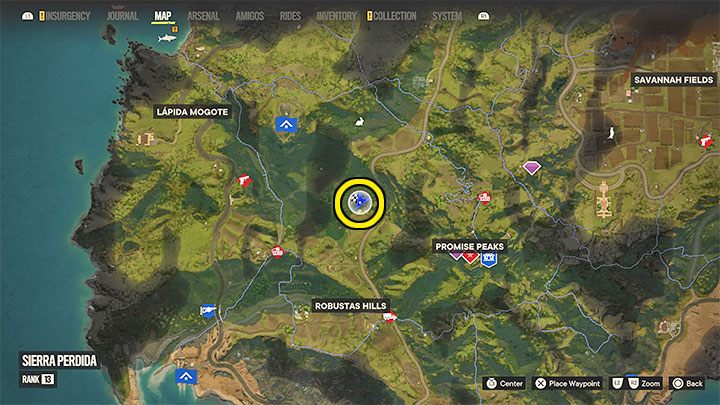 Visit the central part of the Sierra Perdida subregion marked in the screenshot. This is the same location near where the Caffeine Crash Course race begins. 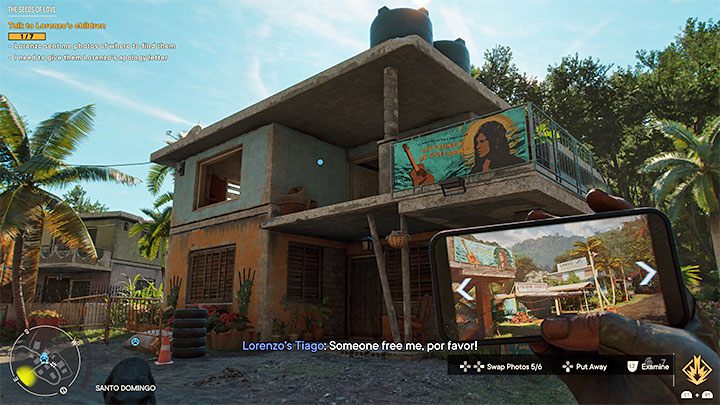 You must enter the building in the screenshot above. Tiago is staying in a locked room upstairs. 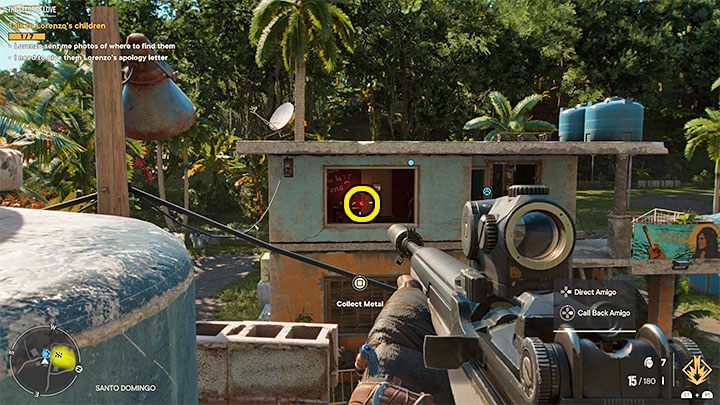 Climb to the roof of the adjacent building, position yourself in the spot in the screenshot above, and aim your firearm at the padlock. 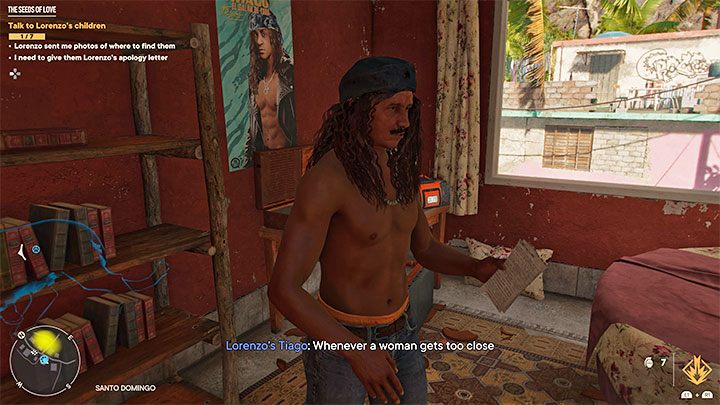 By destroying the padlock with your gun, you can now reach the room with Tiago and hand him the letter. 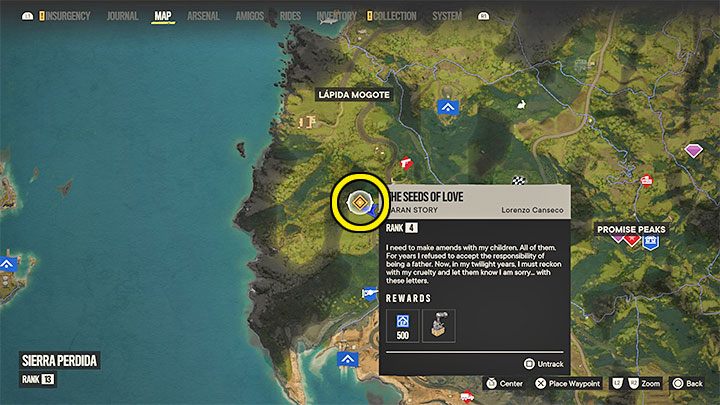 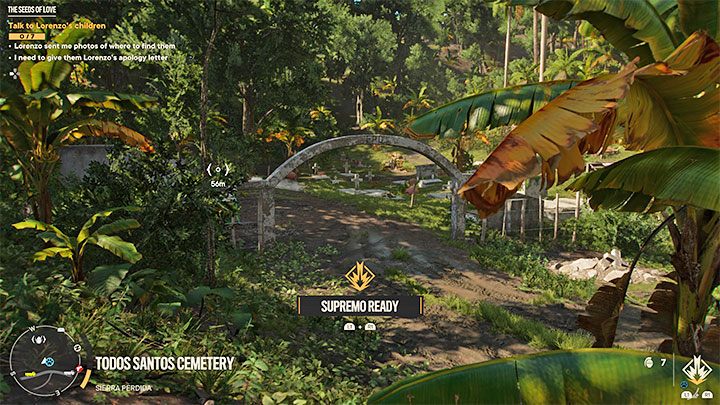 You must look at Todos Santos Cemetery located in the western part of the Sierra Perdida sub-region. 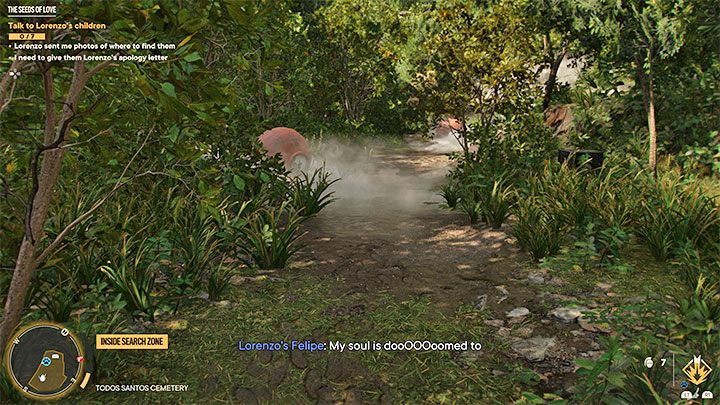 Pay attention to the "ghost voice" and look around the cemetery for a path with artificial fog. 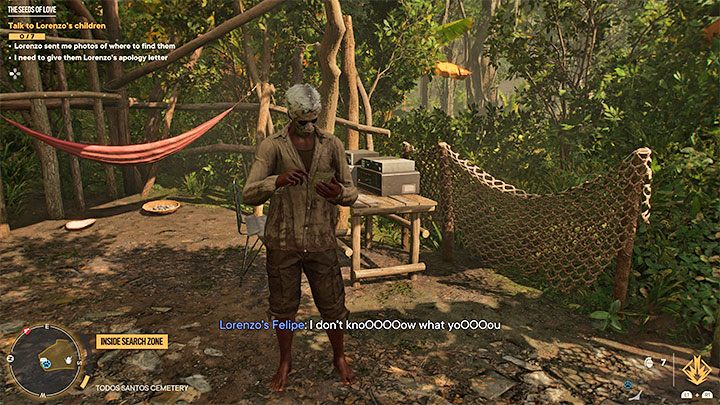 The path will take you up a small hill next to a cemetery where you will meet Felipe. Give him the letter. 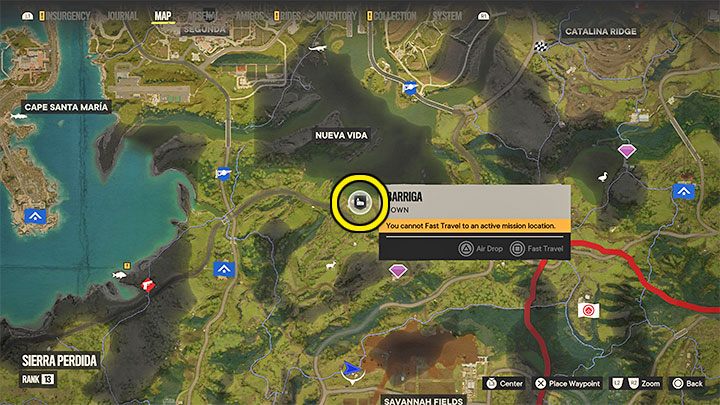 Reach the town of Barriga located at the northern end of the Sierra Perdida region - we have marked it on the screenshot. It is adjacent to the lake. 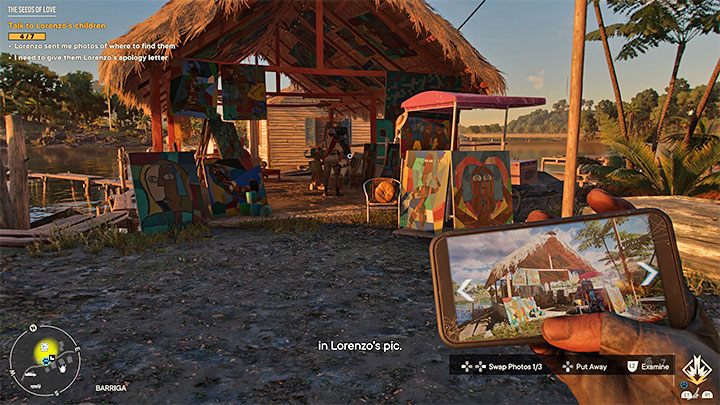 In the town, look around for a cottage with artwork displayed in front of it - the attached screenshot shows it. There are several hostile soldiers residing here, deal with them in any way you can. 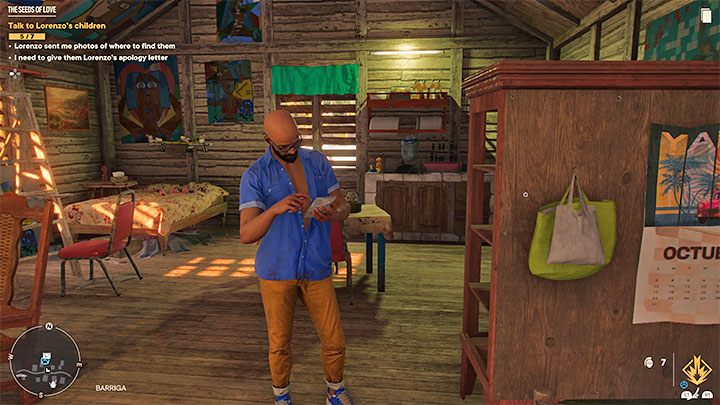 After the fight, enter the hut and hand Camilo the letter. 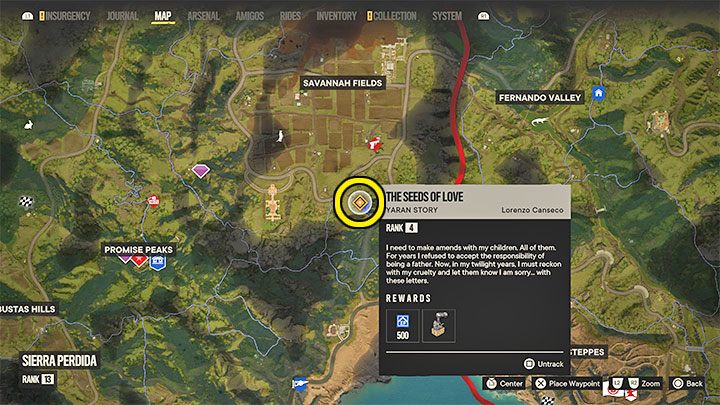 Reach the farm marked in the screenshot, which is in the eastern part of the Sierra Perdida subregion. 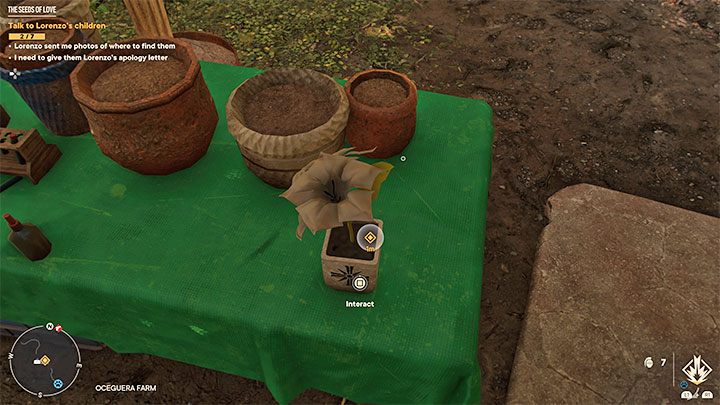 Investigate a small flower pot on one of the tables. 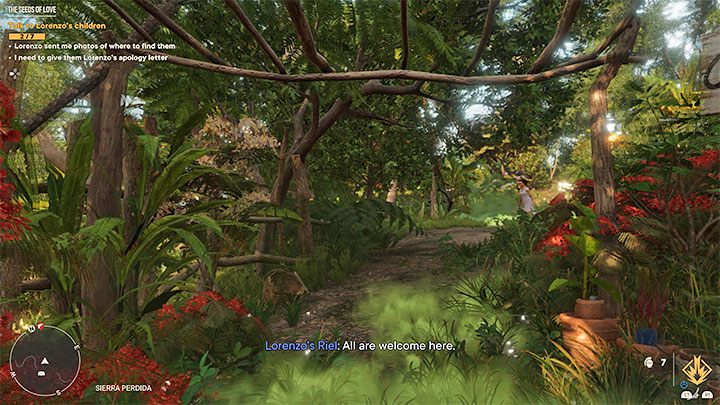 You will start experiencing a kind of hallucination and you have to reach more places with low floating green mist, where Riel will appear. 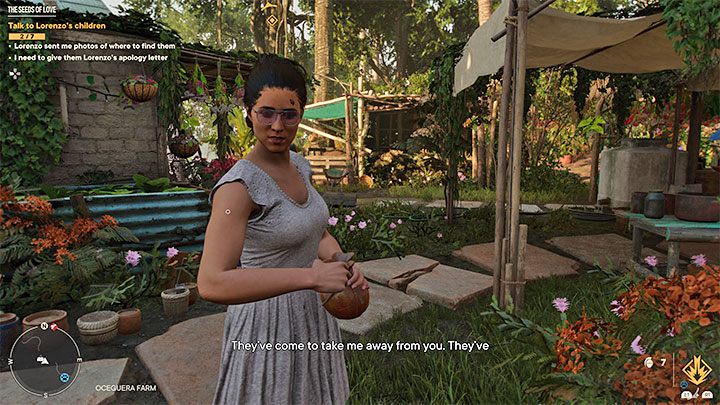 After completing a "round around the farm" of Riel, you will eventually spot the "real" Riel. Speak to her to give her the letter. 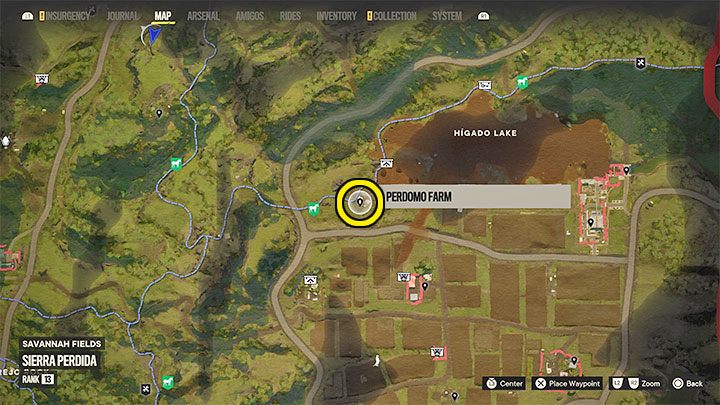 Reach the Pedromo Farm marked in the screenshot above located next to Savannah Fields in the Sierra Perdida sub-region. 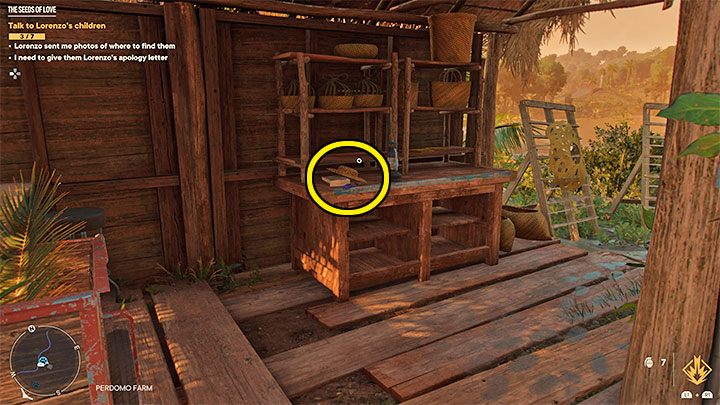 You can ask the residents of the farm about Juan. Investigate the hat marked on the screenshot, under which Lorenzo's Son's Key is hidden. 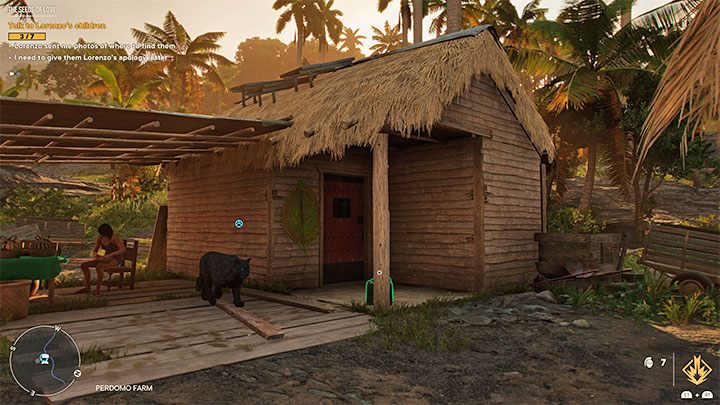 You can use the key to open the hut shown in the screenshot above. 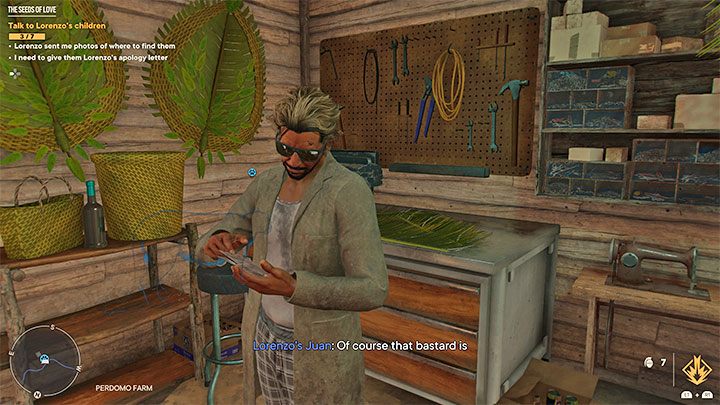 Go inside and talk to Juan to give him the letter.

The quest will automatically end when all 7 letters have been distributed. You don't have to go back to Lorenzo.