On this page of the Far Cry 6 guide, you will find the walkthrough for the final operation in the game - The Battle of Esperanza. It's the last main quest in the game, and our guide describes how to play out the battles in the streets of Esperanza and how to reach the tower of Anton Castillo to deal with the dictator. 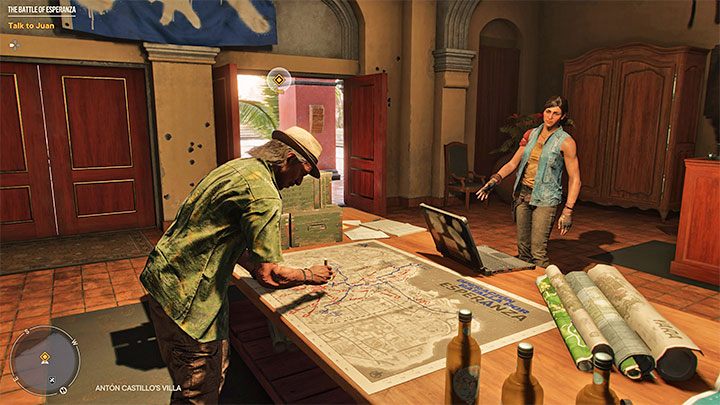 The final main mission of the game will automatically begin after completing operation The Lion's Den, which is after infiltrating Castillo's private island to find Clara.

After you've completed the previous quest, don't walk far from Anton's villa, as you can't travel freely until the game is complete. Head to a room with Juan and other guerrillas to discuss the invasion of the capital.

Travel with Juan to Esperanza 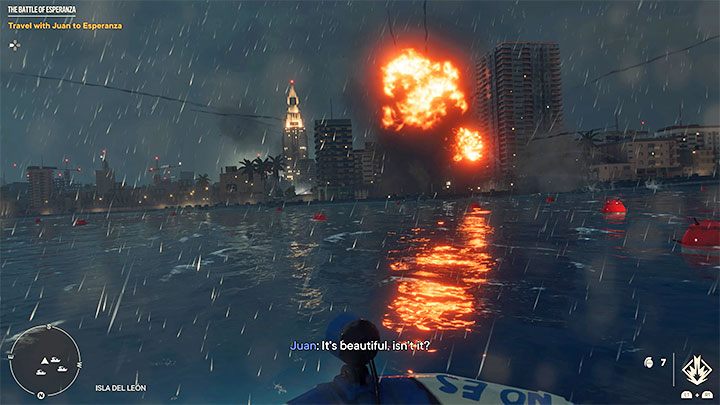 You don't have to do any actions during travelling by boad towards Esperanza. Although fighting has already begun within the capital city of Yara, the heroes are in no danger until they reach the shore. 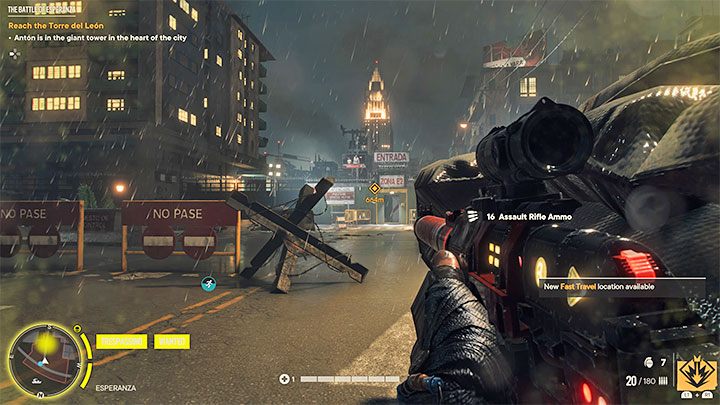 Torre del Leon is the name of the large skyscraper, which is the headquarters of Anton Castillo. The building is in the central part of Yara, and you will have to walk a distance of several hundred meters to reach it.

The route to the skyscraper is relatively linear, as the fighting areas are surrounded by various obstacles that cannot be passed. The most important hint is that you don't have to hurry to get to your destination. In each new location you visit, try to locate your opponents with no rush. As you will fight against will the members of the special forces, it is advisable to use strong weapons, preferably with armor-piercing ammunition. 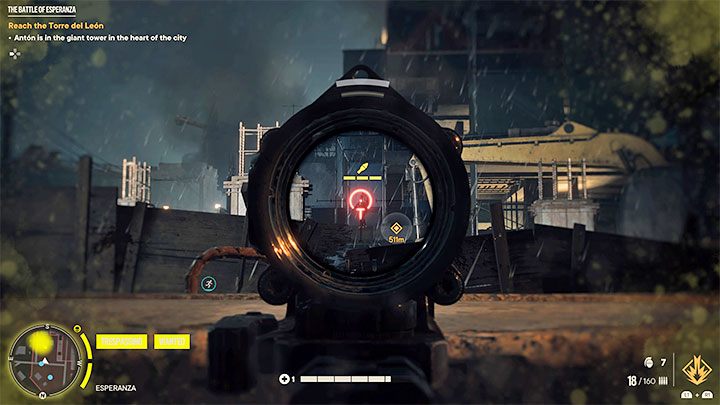 During the travel, watch the radar. In addition to "ordinary" soldiers, you can also encounter hiding snipers. These enemies hide in the area of the first visited post - don't let them surprise you.

The dangerous enemies can be also: 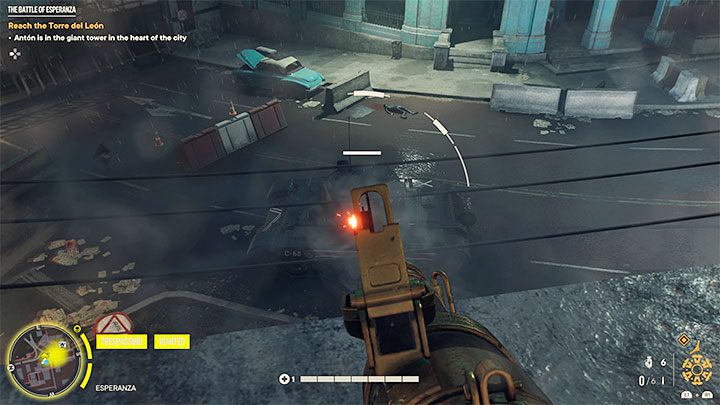 One of the city streets is guarded by an enemy tank. You can attack this machine (with a launcher), sabotage it (EMP grenade or Volta supremo), or try to bypass it. In the latter case, use the nearby stairs leading to the roof of the building. You will also find a box of ammunition there if you need it. 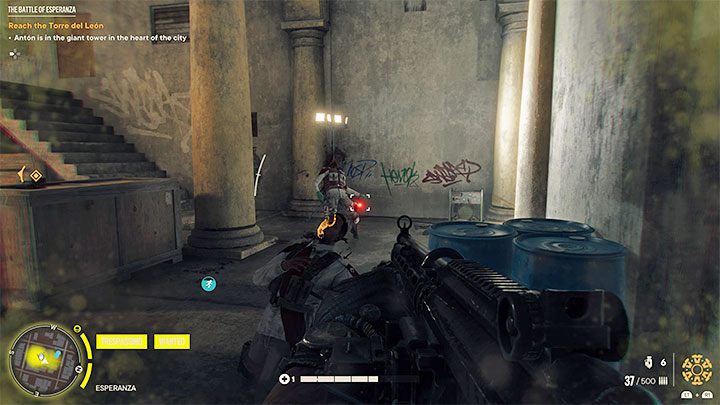 Later while traveling, expect to fight some close-combat battles. Stock up on good weapons for this, such as a heavy machine gun or shotgun. That will protect you from the risk of losing too many health points. 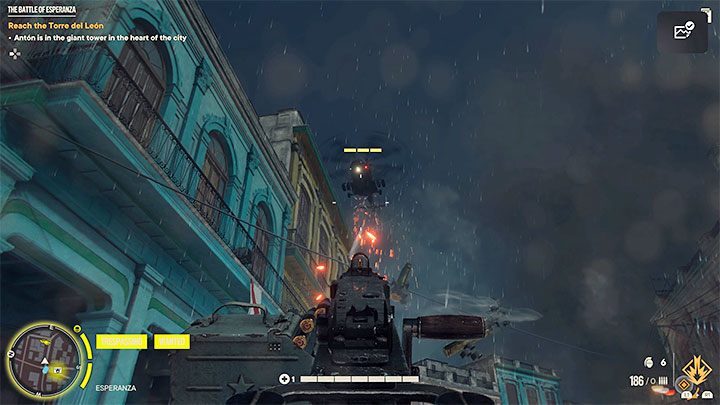 During the final part of the march, an enemy helicopter may appear over your head. Again, you can use the proven methods - use a weapon with explosive ammunition, a launcher, a stationary cannon, or activate the Volta supremo. 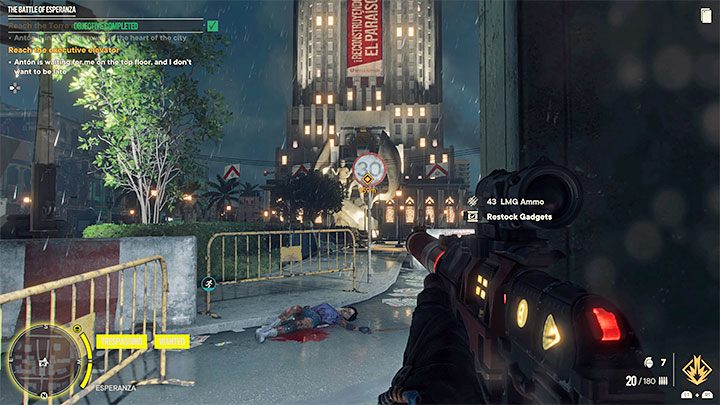 The mission objective is the Torre del Leon skyscraper shown in the picture and directly in front of it you will not encounter any more enemies. You can head towards the main entrance of the building. 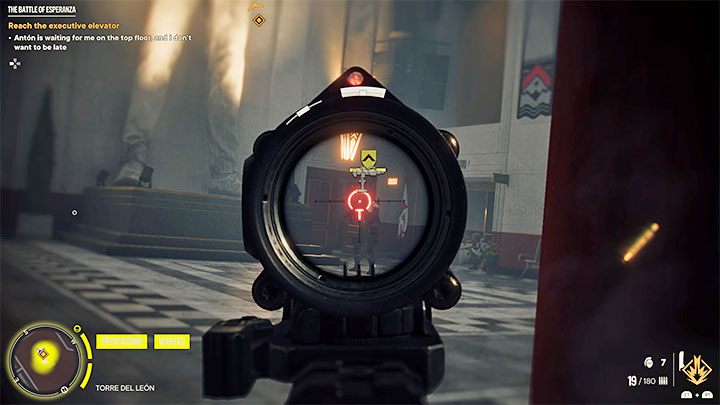 In the skyscraper lobby, you will encounter a large group of enemies. They are expecting the rebels' arrival, but you can still attempt a surprise attack on them by carefully opening the first door.

In the first and subsequent battles, watch the radar, but keep in mind that it may also show the movement of soldiers from other floors. 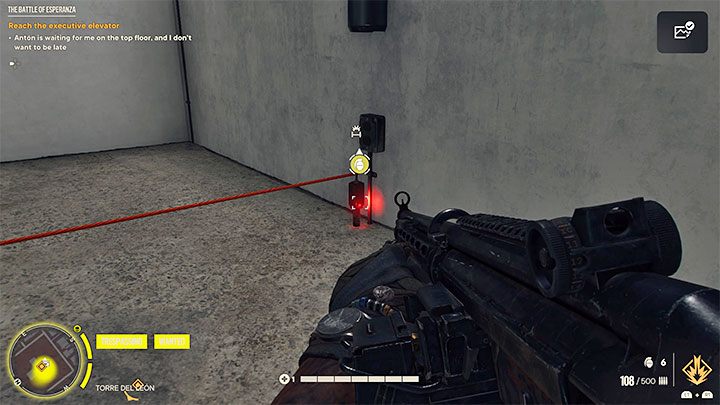 Ultimately, you have to look around in the corridors for stairs allowing you to reach higher floors. Watch out for the trap in the stairwell - approach it in a crouched position to disarm it. You should also find a box of ammunition along the way. 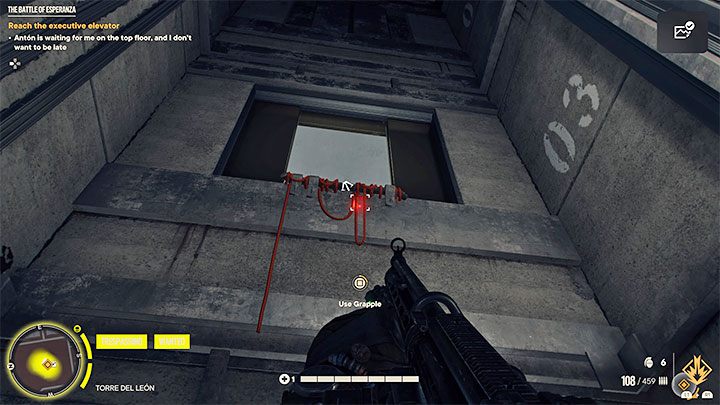 To get to the floor with the elevator marked by the game, look around for an old shaft where you can use a climbing kit. 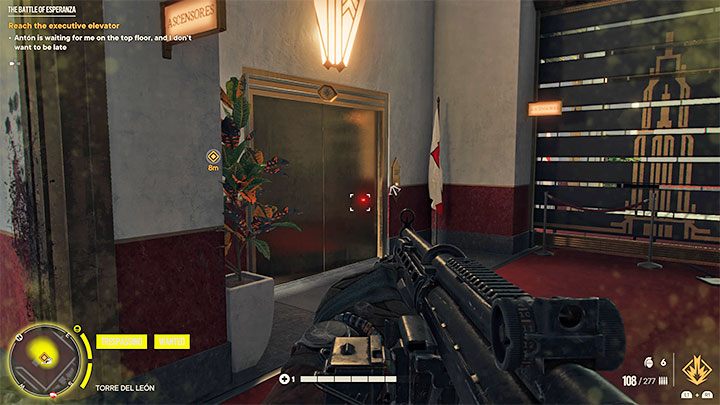 On the next floor, you have to join more fights and avoid placing yourself in the open in the corridors with railings because you can be attacked from a distance.

Elimination all of the enemies is not mandatory. The most important is to reach the elevator that goes to the top floor of the skyscraper. You can see it in the picture. Interacting with it will trigger a cutscene ending this operation and the whole main storyline.