On this page of the guide to Far Cry 6 you'll find a walkthrough for The Lion's Den operation - it's one of the final two missions in the Esperanza region (the capital of Yara). The walkthrough explains how to prepare to the campaign's finale, how to sneak into Anton's mansion, where to find Clara and how to defeat the special forces encountered in the villa. 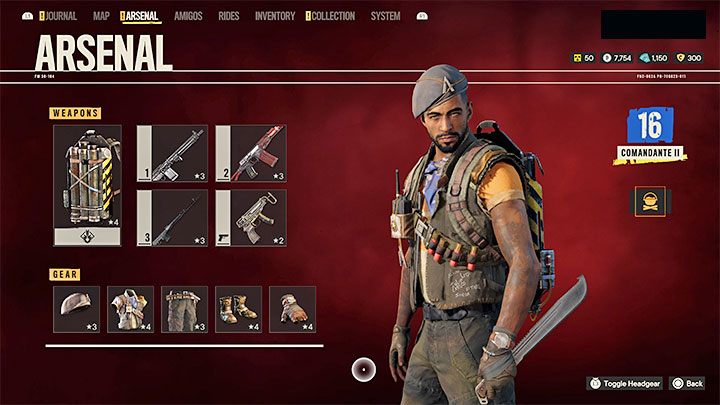 Warning - point of no return 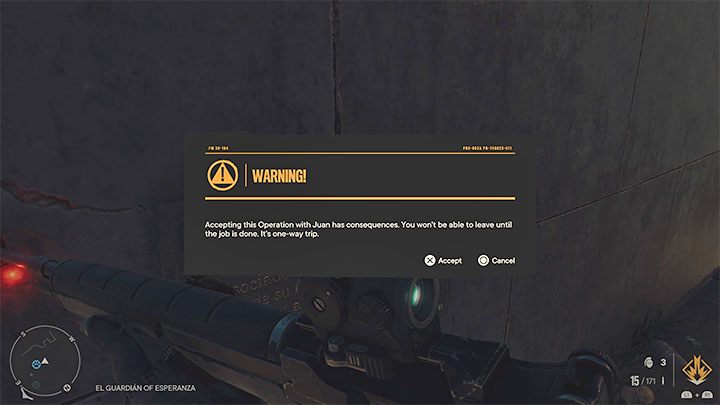 Once you reach this mission's play area (as described below) you'll be warned about the point of no return - as shown on the attached image. In short, this means you have to finish the two final missions of the game in one go, without being able to take a break and return to freely exploring the world.

The final operations aren't extremely demanding, though before starting them it's worthwhile to equip yourself with your best weapons and gear, as well as level up your hero to at least the rank the journal attributes to the quest (in our case it was 14).

The game lets you continue playing after finishing the main story, so you don't need to worry about unfinished sidequests or optional activities before you start the campaign's finale. You'll have time for them later, so you won't miss a thing.

Meet Juan at the base of El Guardian of Esperanza 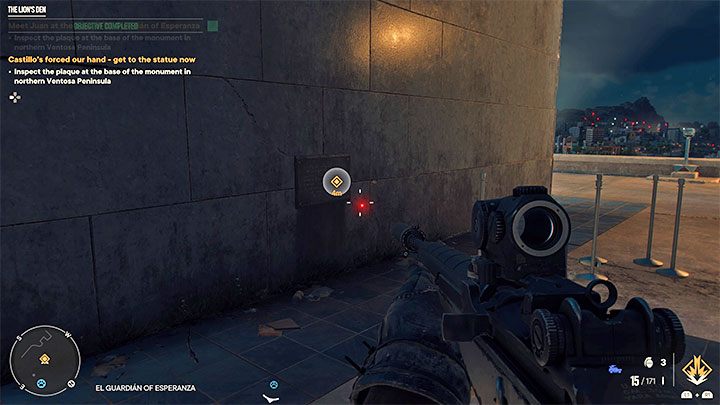 This mission appears in your journal after finishing all other main quests, that is:

After fulfilling all requirements Juan will contact you, instructing you to meet him at the huge El Guardian of Esperanza statue. It's located east from the island's capital. You must examine the plaque at its base, as shown on the picture. 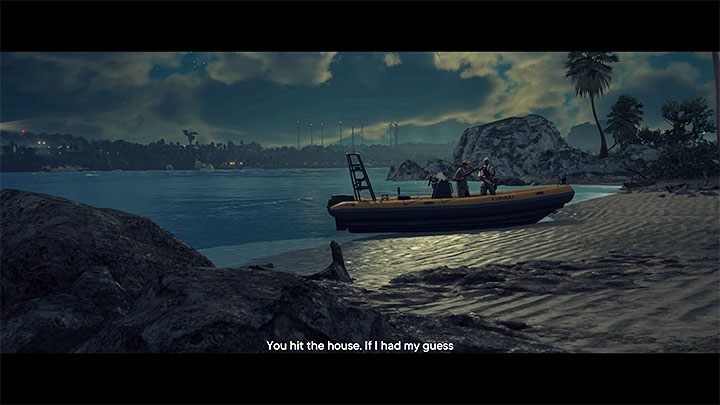 The entire mission is set on Castillo's private island, Isla Del Leon. Here's some important information regarding this area: 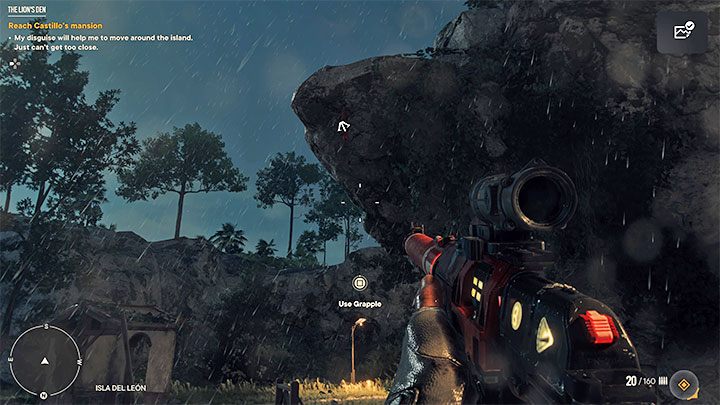 Begin a linear march towards the top of the nearest hill. You'll have to use a climbing kit along the way. In the first spot shown on the picture above you need to swing on the rope and jump across. You don't actually need to climb it. 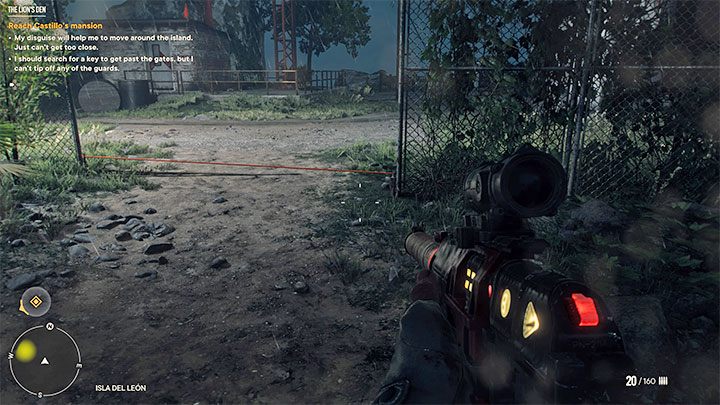 The climbing kit becomes necessary again a bit further, this time you'll have to climb the rope to reach a high ledge.

Watch out for the string trap shown on the picture above. Carefully approach it while crouching, disarm it and proceed. 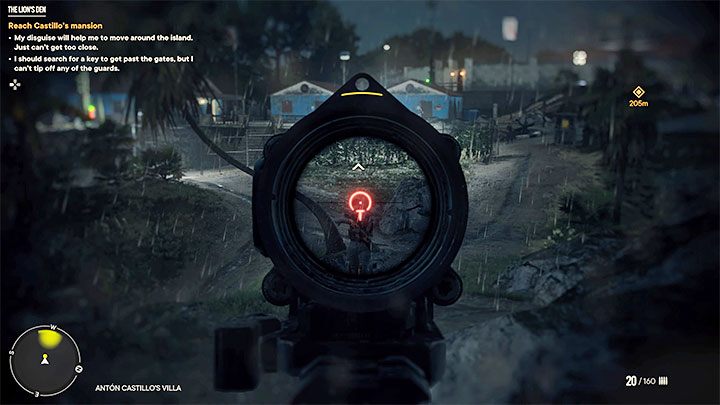 You must now go down the hill, heading towards the mansion visible in the distance. You'll encounter a single guard along the way who can be shot with no risk. No one else should come here, so the body won't be found. 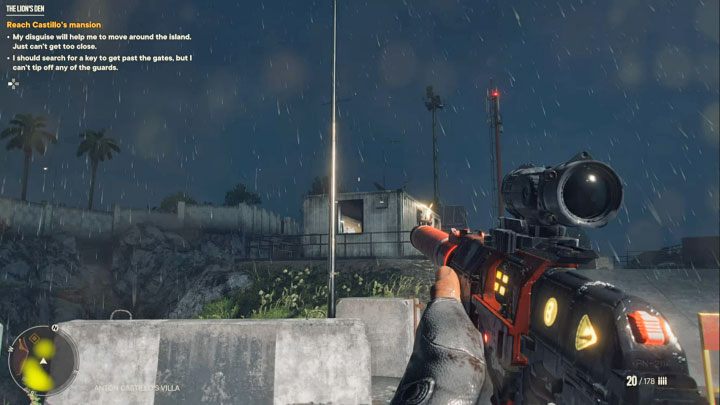 Ignore the mansion gate for now, it's locked. Head right instead while not getting to close to the enemies - hide and wait until they walk away if necessary.

You need to reach the small building shown on the picture - before you go inside, make sure one of the guards left it. 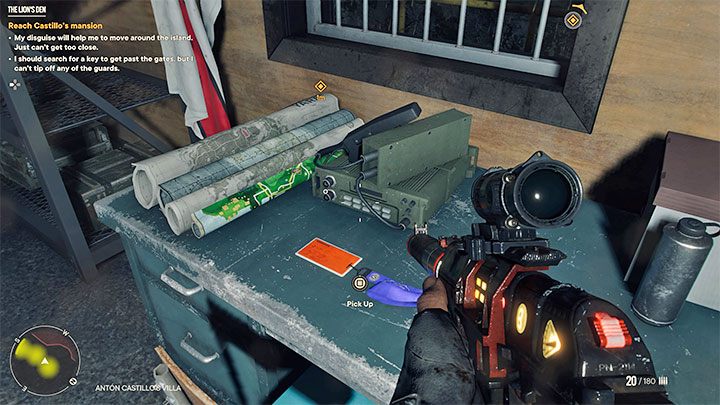 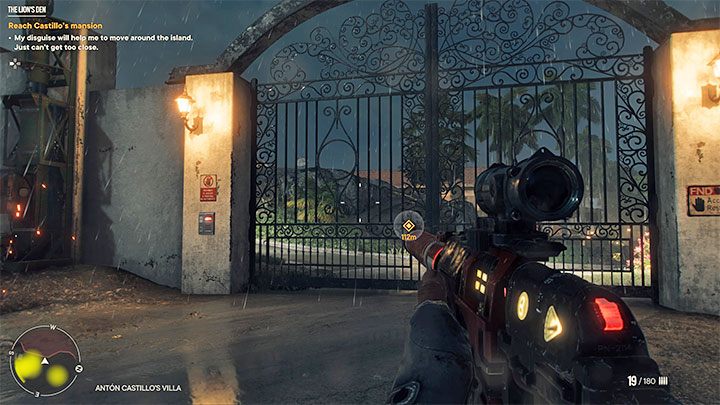 With your newly acquired access card you can return to the mansion's main gate and open it. You'll pass a checkpoint, so you'll start off from here if you fail. 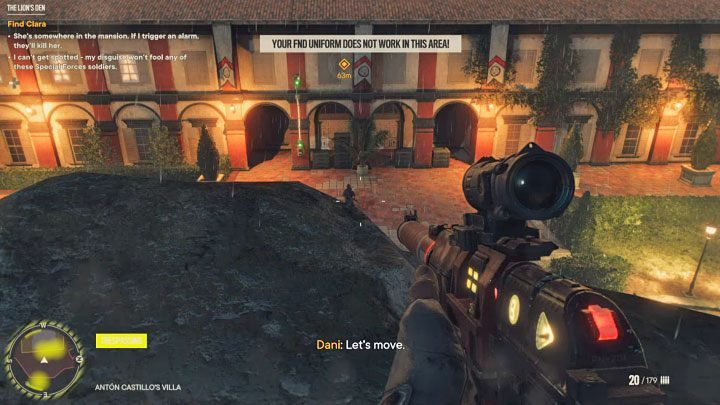 You need to keep sneaking in the estate, as you still can't be detected. Furthermore, the disguise no longer has any effect here so you need to stay away from the enemies.

You can climb the hill next to the mansion to do some recon. You'll need to explore the left side of the mansion (looking from the starting point). 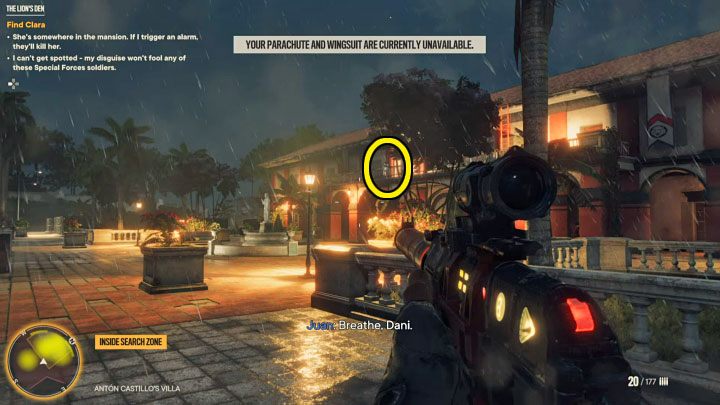 Your destination is the side left area shown on the picture above. Eliminate the single guard on the balcony we've marked on the picture. 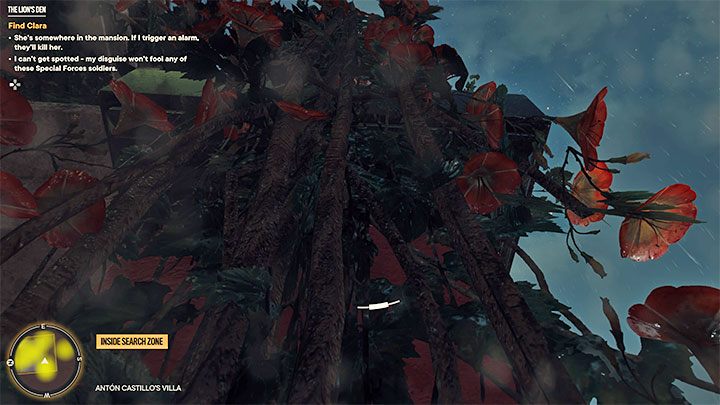 Wait for the patrolling guard to move away and reach the vines underneath the balcony. Climb up them, get on the balcony, then use the ladder to get to the roof. 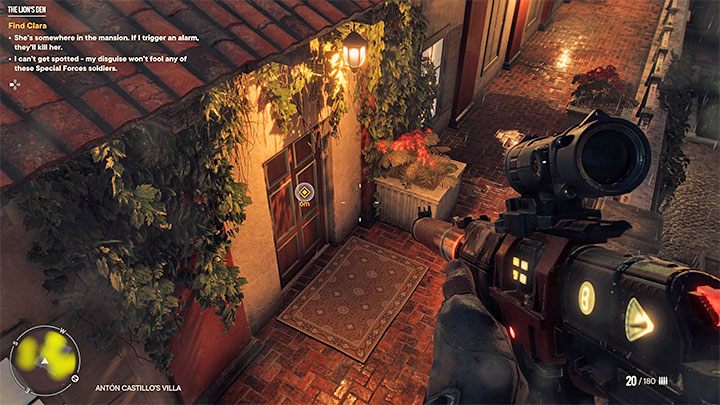 You're now very close to the mission objective. Jump down from the roof to the inner balconies - here you'll find the marked door you need to examine. You'll see a long, important cutscene.

You'll now regain access to your equipment, but the game keeps your current weapons as the active ones - if you want to change your guns, pause the game and equip something else. 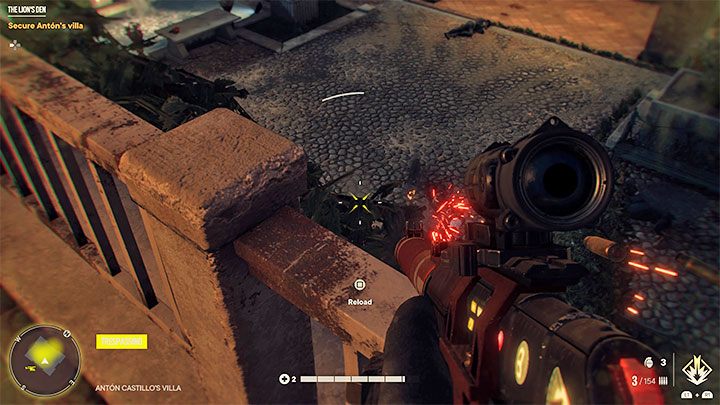 It's time for a grueling battle in Anton's mansion. Once you regain control of your character, it could be a good idea to stay on the upper balconies (at least for now). You'll be able to lean out and gun down enemies on the lower courtyard.

During this encounter you have to fight the special forces. Expect them to be more durable, more accurate and able to use unique actions (such as placing shields). Thankfully, you can use all the weapons acquired throughout the game. 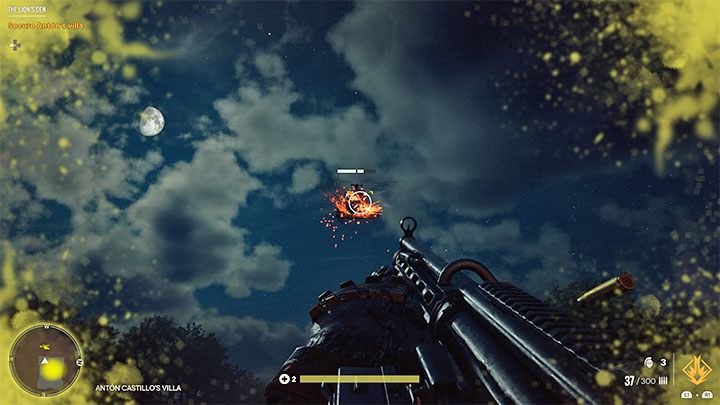 Aside from soldiers you'll also encounter at least one helicopter flying above the villa. Use the proven methods to take it out - explosive rounds, rocket launchers and the Volta supremo (if the chopper is nearby). Take advantage of the fact the inner courtyard features plenty of cover you can hide behind. 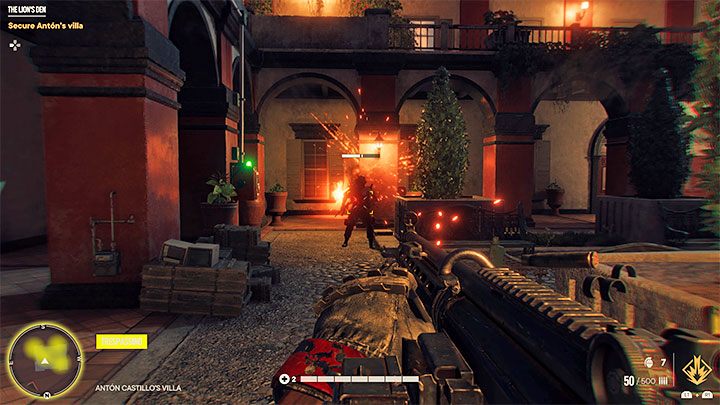 We advise you to stay on the balconies for as long as possible, although you should change the position if you're under heavy fire or if a grenade falls nearby. Later in the fight you should reach the lower levels. Use heavy weapons and rely on the radar to avoid ambushes.

Fight on until you defeat all enemies, triggering a few new cutscenes. You will now automatically progress to the final operation of the game - The Battle of Esperanza.