This page of the guide to Far Cry 6 features a walkthrough of the Guerrilla Radio operation - one of the main missions in Valle De Oro. You will learn how to get to the Marquessa Villa and how to secure it, how to prepare for the concert and how to protect your equipment from hostile attacks while on stage. 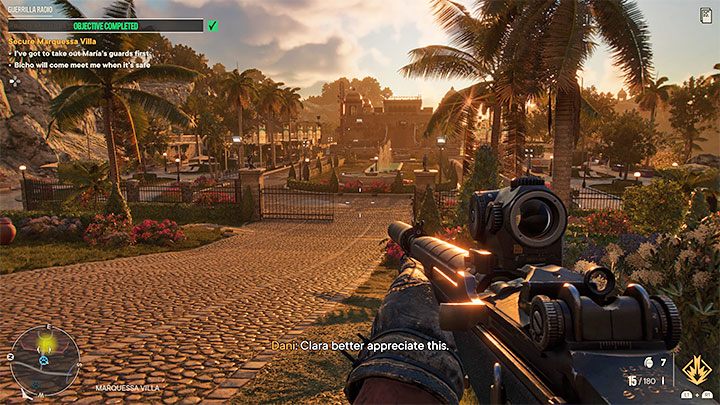 This operation will automatically appear in your log once you complete the Radio Libertad main quest. You have to meet Talia Benevidez at Camp Maximas.

The Villa is in the Noventarmas region in Valle De Oro and you can choose the main entrance onto the property. 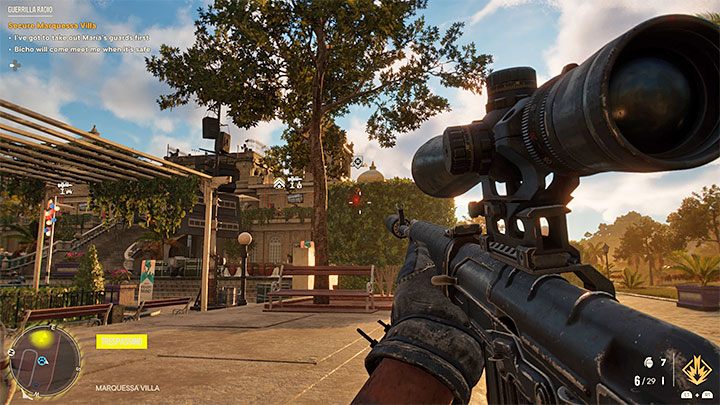 There aren't many enemies in the villa, but eliminating them can be complicated due to the open space between the entrance gate and the mansion itself. We recommend using sniper rifles and/or hiding behind low walls and other indestructible obstacles along the way.

Also, don't let the enemies get to the stationary guns in the area - these are by the main stairs and on the large upper balcony. 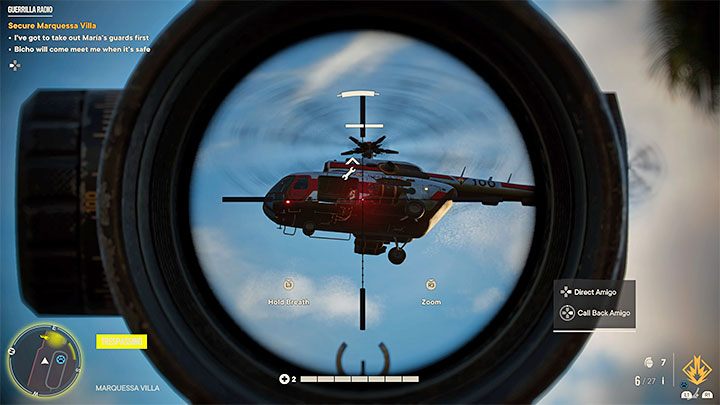 It's better to remain stealthy, because a helicopter might arrive if you alert the enemies. If that happens, don't use the stationary guns to shoot it down, as they will come in handy later. It is better to use a good weapon of your own or activate the Volta supremo when the helicopter comes closer.

Set up the equipment for the show 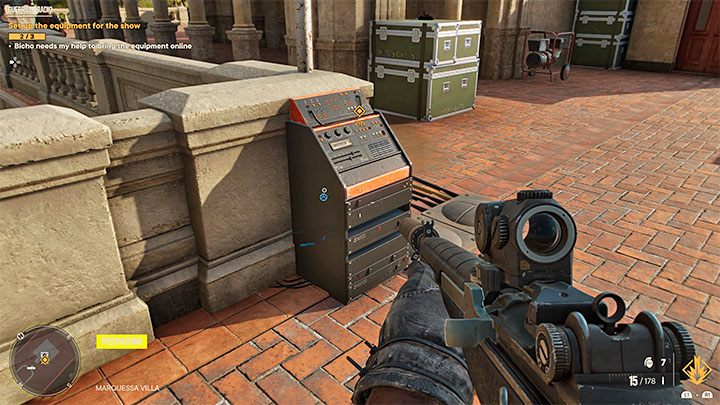 When the fight is over, talk to Bicho, who will appear in the mansion. The new mission objective is very simple - you must reach 3 devices marked by the game and interact with each of them.

The concert - a big fight 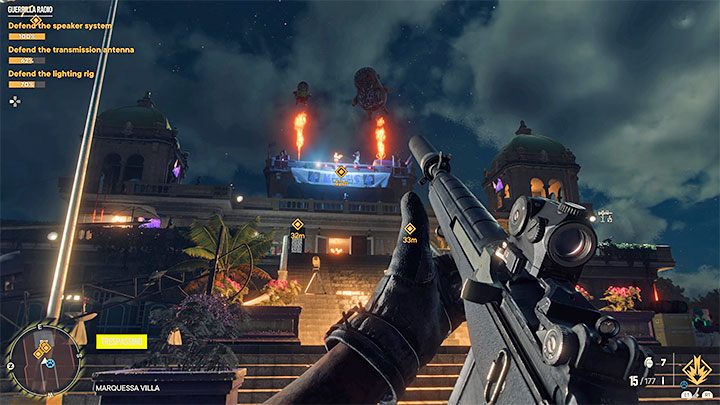 The concert will begin and your task will be to protect the local equipment - Speaker System, Transmission Antenna and Lighting Rig. Each of these devices is marked and has its own energy bar that can't drop to 0%.

Once the fight begins, keep a close eye on the warnings about the equipment being under attack and focus on quickly getting rid of the soldiers or enemy machines responsible for it. 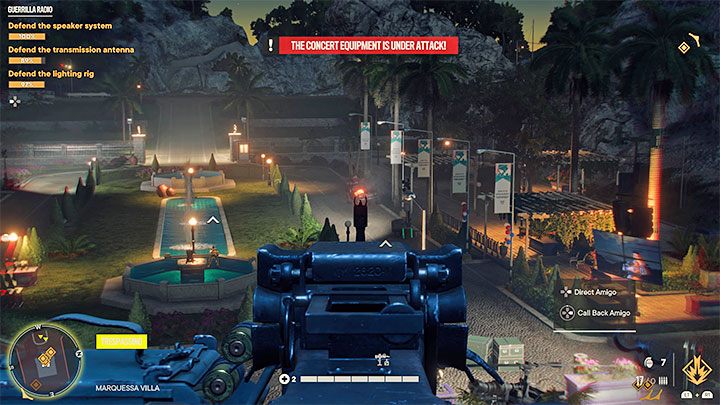 The stationary guns near the mansion, which include launchers and machine guns, can help you a lot. You will find them in front of the large staircase leading to the main entrance of the villa, and on the wide balcony which you can reach using a ladder.

Before you use the guns, you should know that they have a limited amount of ammunition and when you use it all up, the gun becomes inactive. Don't fire for a very ling time, then, and don't waste the guns on defeating single distant enemies. 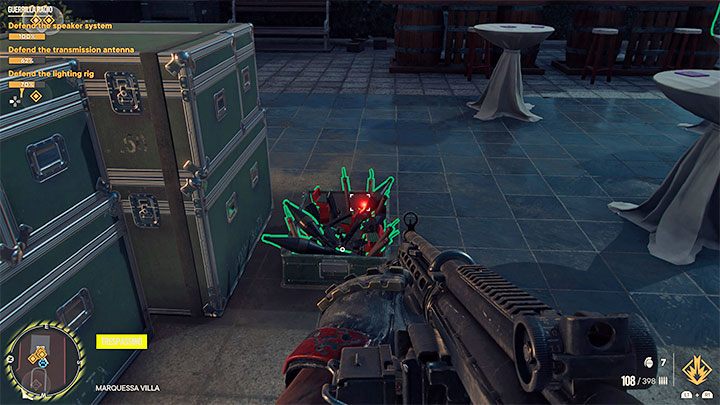 Once you've used up the ammunition of all 4 guns, switch to one of your own good weapons and keep fighting in the garden in front of the villa. You should also find an ammo box here, but use it only when you start running out of ammo (especially for the launcher and other good weapons). 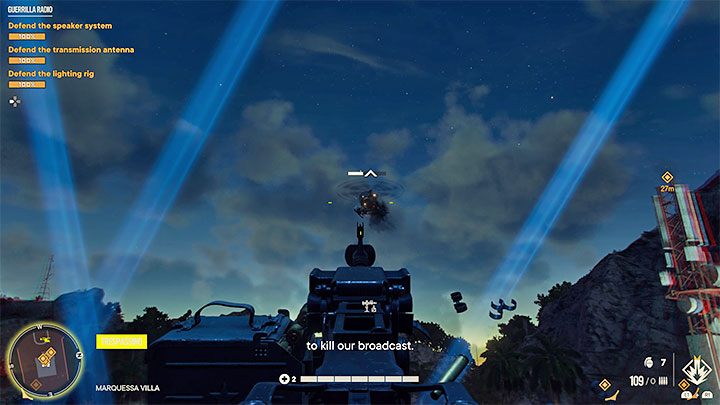 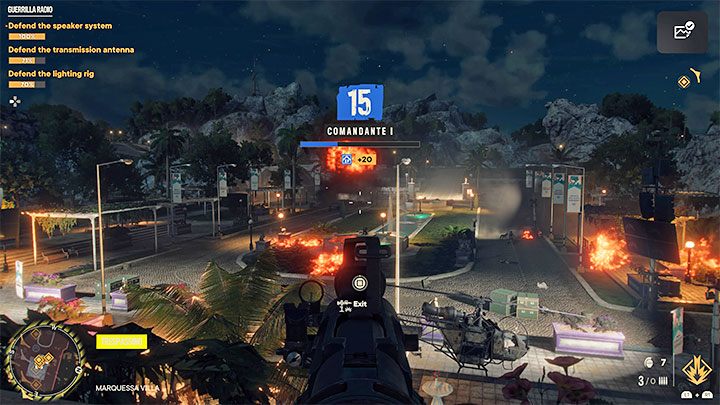 During the fight pay attention not only to the soldiers heading toward the stage, but also to the enemy machines. At first, enemies will use "only" off-road vehicles, but later some helicopters and a tank may appear in the area as well. When you see the tank, attack it as soon as it enters the mansion grounds, because it can cause a lot of damage if it comes near the stage and uses its main gun.

To destroy the machines you can, of course, use the stationary guns (preferably those with a launcher), but your own rocket launcher, grenades (including EMP ones) or the Volta supremo, which can paralyze enemy vehicles, will also work. 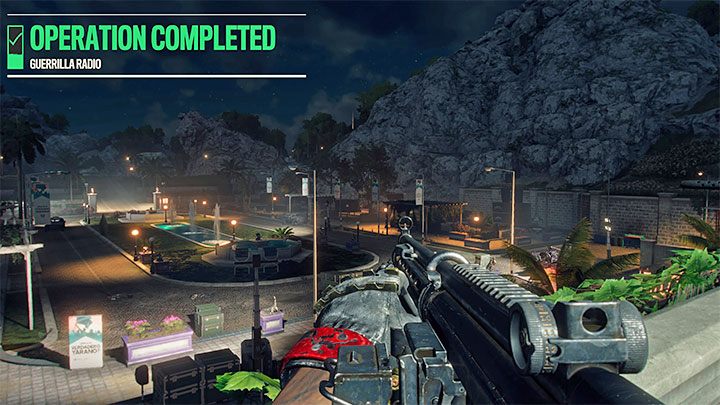 You have to fight until the stage performance ends (not until all enemies are down), because only then will the operation be completed. If you dealt with the enemies effectively, you might be able to watch the final part of the show in peace, without any more reinforcements bothering you.