This page of the Far Cry 6 guide contains a walkthrough of the Harpoon operation - one of the main missions in El Este. The following walkthrough explains how to survive the battle involving the Karlito tank, how to get rid of the poison in the fort, where to find Admiral Benitez, how to get to her office and assassinate her.

Talk to El Tigre to launch the attack 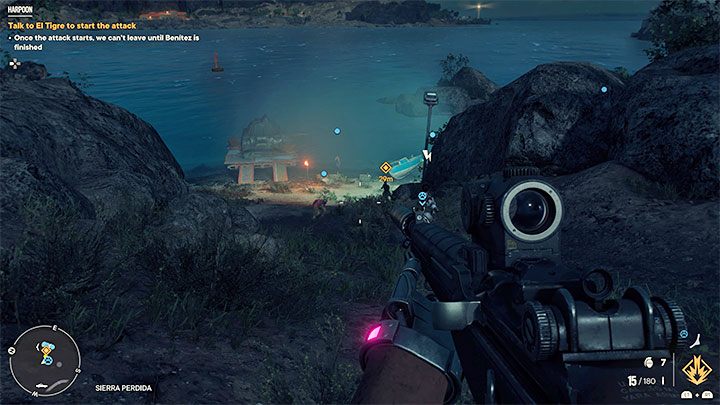 This operation will appear in your journal after completing several previous main quests in El Este - National Treasure, Room Service and Knuckleball. You must meet Yelena at the guerrilla hideout in Concepcion.

El Tigre resides at the southern end of El Este. You can get there any way you like. Note that the game may prevent you from talking to El Tigre if there are any random soldiers or predators in the area. You will have to neutralize these threats first. 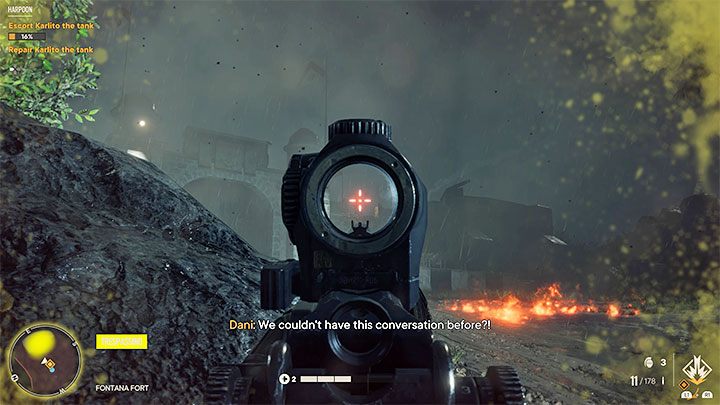 After watching the invasion cutscene, you will move right into the battle area. During the battle, focus on eliminating those enemy soldiers that use rocket launchers since they're the biggest threat to Karlito. Some of them will probably occupy the walls of the fort. A gun with a good scope for ranged attacks will come in handy here.

Of course, keep checking the radar readings and get rid of the enemies that get too close to you. 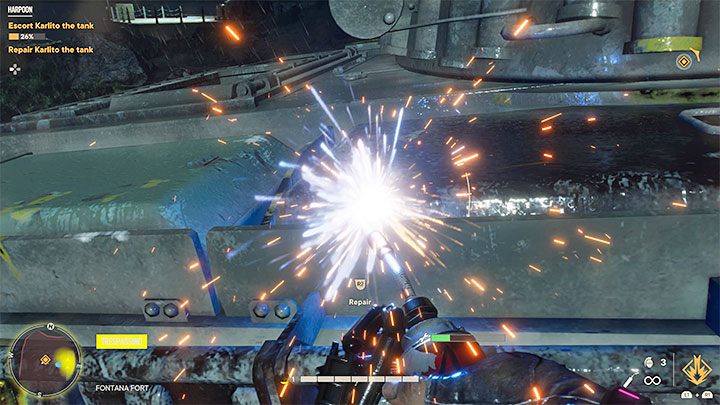 The tank's health bar can be seen in the upper left corner of the screen, but you can increase the health level throughout the battle. If Karlito is seriously damaged, the tank will stop for a while and you will be able to reach it with a repair kit to restore it to working order. 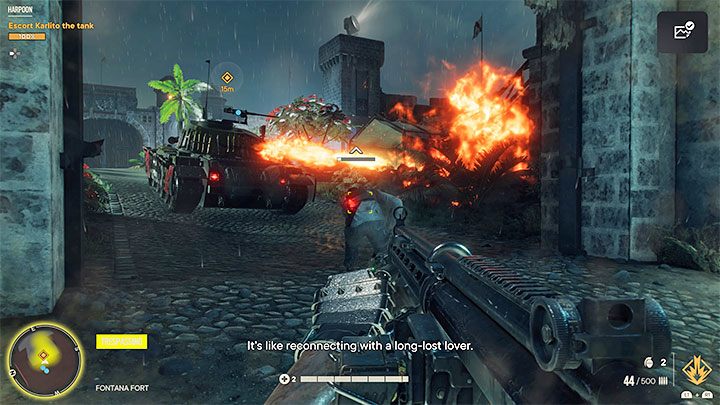 The premise of this battle is to enable the tank to push forward and break through the gates to get further into the fort. After you reach the last gate, a cutscene will play. After that, you will find yourself alone inside the fort. 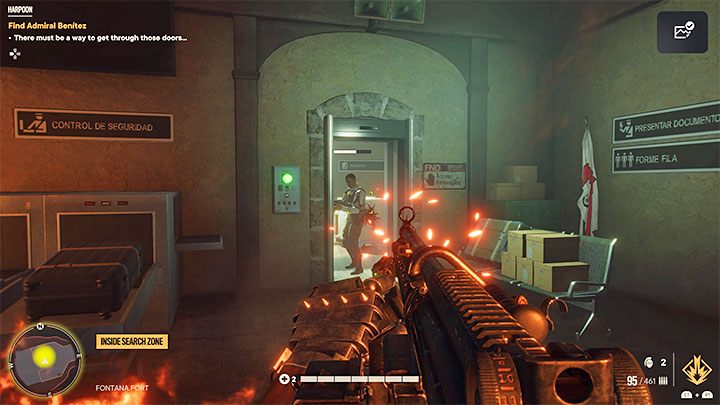 First, you must defend yourself against several waves of enemies. By default, all doors in the room are closed, but every now and then a random door will open (a green light will come on next to it) and enemies will appear by the new passage. We recommend using weapons that are suitable for short-range combat and make the fight easier by throwing grenades into adjacent rooms.

In addition, you must avoid contact with fire and if you accidentally set yourself on fire, try to put it out quickly.

Turn off the poison 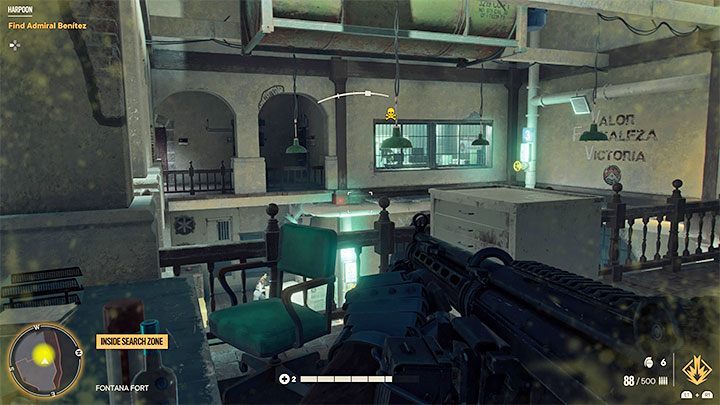 In the adjacent room you will notice an enemy wearing protective gear, but you won't be able to access the room right away. Get rid of other enemies in the area and head to the lower level. The current mission objective will be rather challenging - you will have to stop the poisonous red vapors from spreading. To avoid death, you'll have to act quickly. 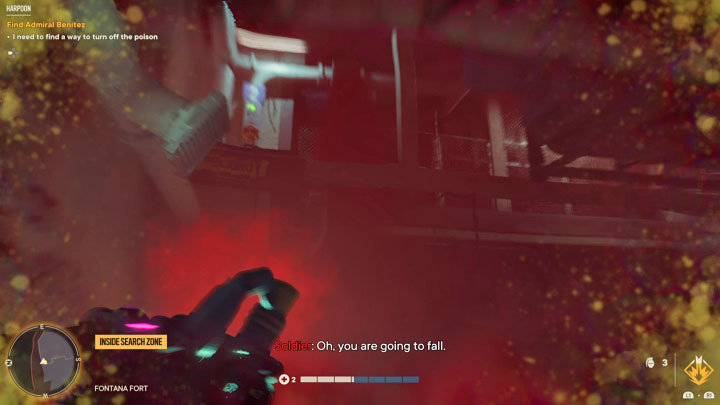 Your task is to quickly reach the 4 valves to stop the poisonous fumes from spreading.

It is very likely that you will need healing at least once. When your health falls to a dangerously low level, hold down the manual healing button, but don't stop moving - keep trying to reach other valves. Before you start looking for the valves, you may also want to put on some equipment that can, to some extent, make you immune to the poison. 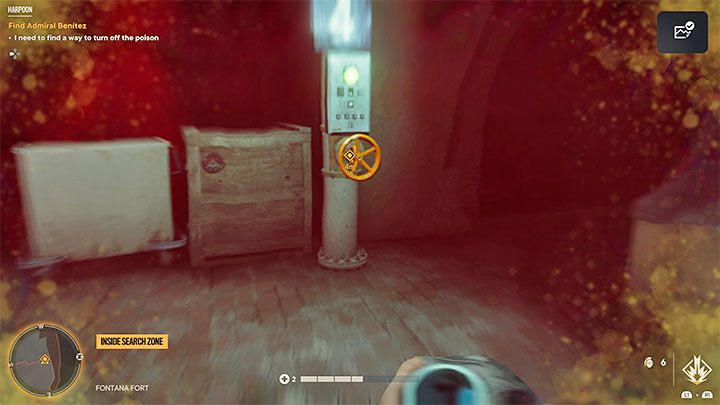 The first valve is on the lower level, i.e., under the closed room with the enemy in a yellow protective suit inside. 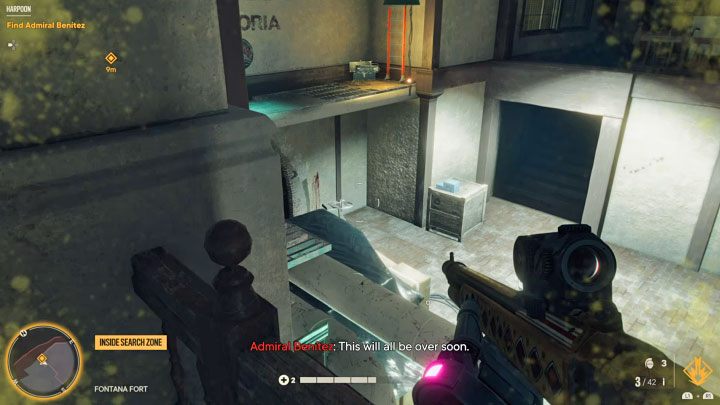 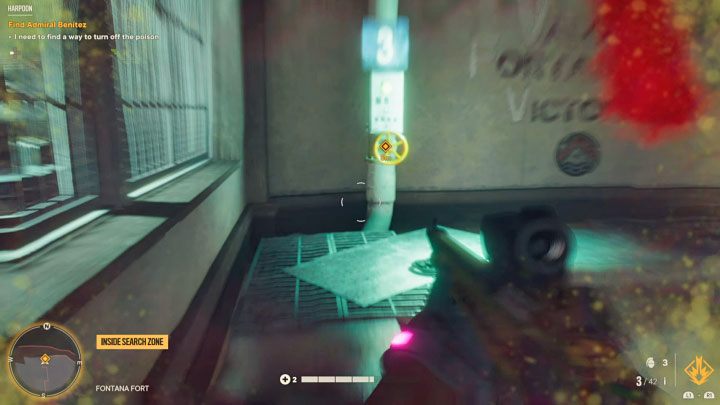 Head back upstairs and run towards the locked room (the one with the single enemy). To the right of it, you can jump over the railing and jump down onto the protruding ventilation shaft. This way, you will reach the second valve. 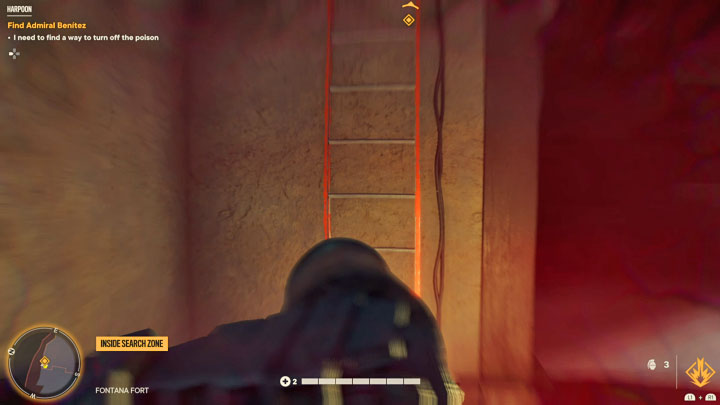 Turn to the right, reach the ladder and go up. After using the ladder, you'll find the third valve right in front of you. 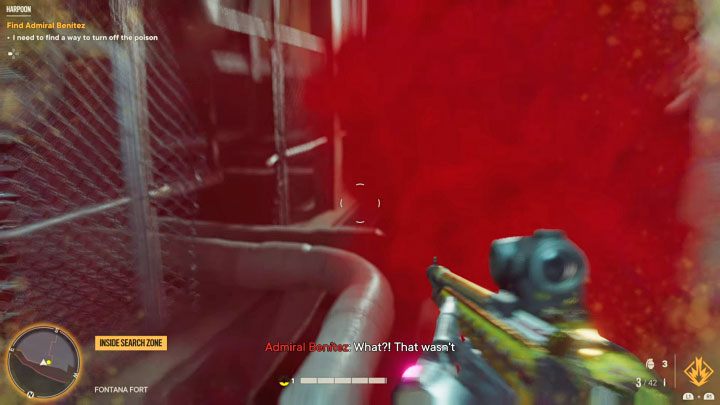 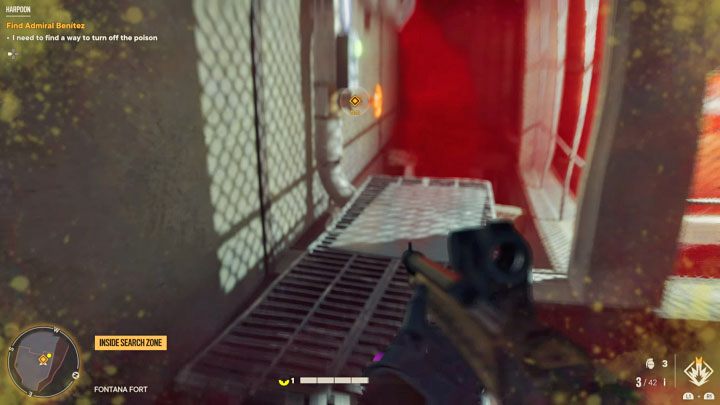 In order to find the last fourth valve, go to the right. You must run over the pipes and go through the hole in the grid. Keep walking along the pipes, which will lead you to a balcony with the valve you are looking for. 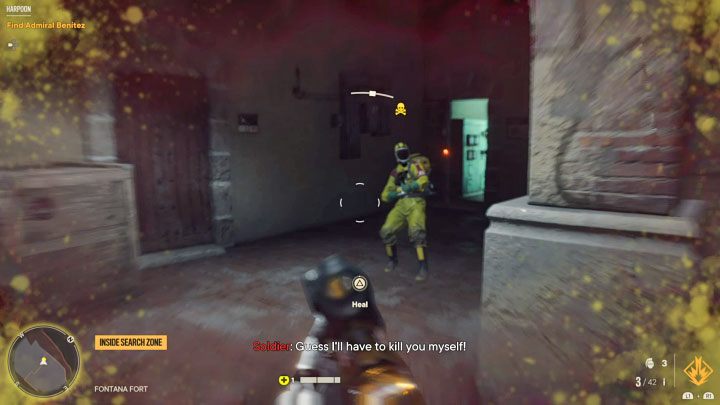 An opponent in a yellow protective suit will come out of the room where he's been hiding up to this moment. You can jump down to the lower balconies and deal with him in any way you like. 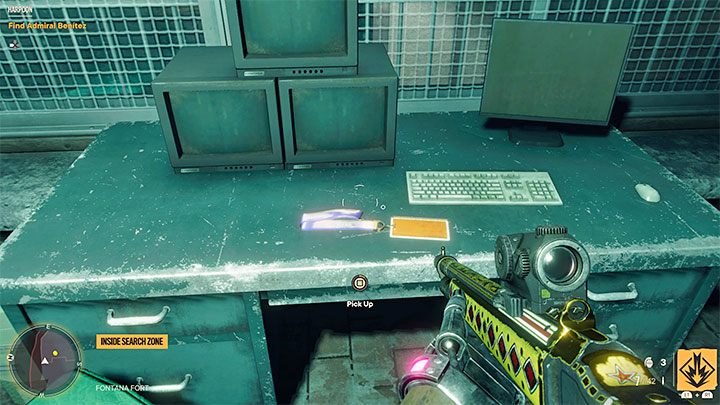 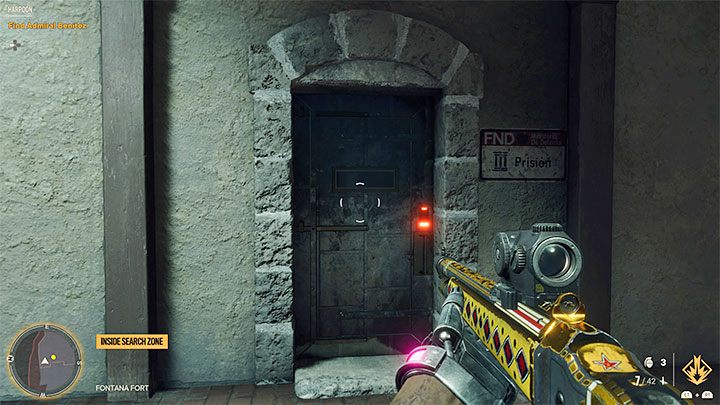 Check the room where you saw the enemy in the yellow costume and you will find the Northern Wing Keycard. Upon taking it, head towards the locked door nearby. It will be the one with the Prison sign. 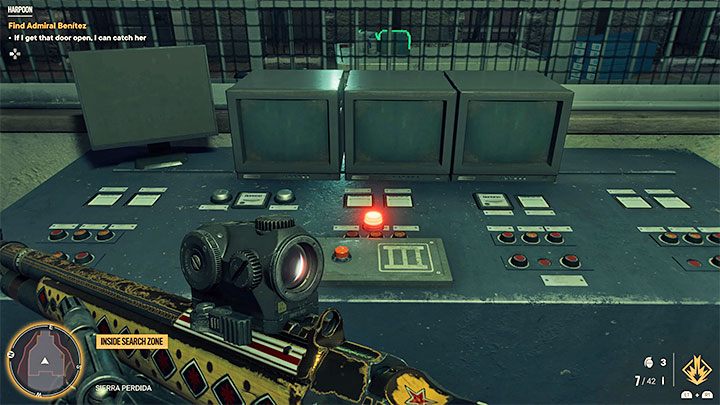 Once you reach the prison, there will be a brief encounter with the Admiral, but you cannot kill her now due to the armored glass.

Reach the button that opens the cells. There is a small trap because there were enemies in some of the cells. Return to the main part of the prison block and deal with them. Fortunately, the game will not punish if any of the freed rebels die. 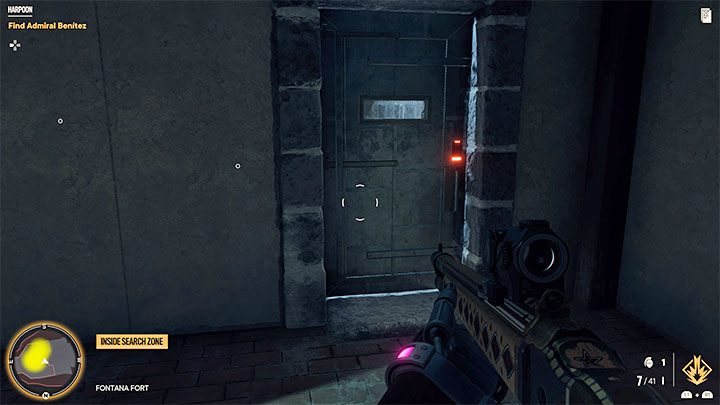 One of the enemies will drop the Southern Wing Keycard. Locate the new locked door in the area and unlock it with the keycard. 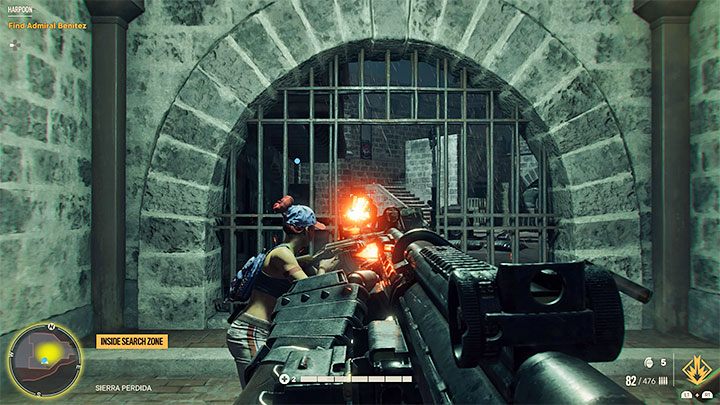 You'll soon meet Yelena and the rest of the rebels who managed to get inside the fort. Before you go any further, look around for an ammo crate.

Expect another ambush - enemies will start appearing in the area after you exit the fort courtyard. You don't have to hurry with eliminating the enemies; you can retreat to the previous location to attack them from behind the covers. 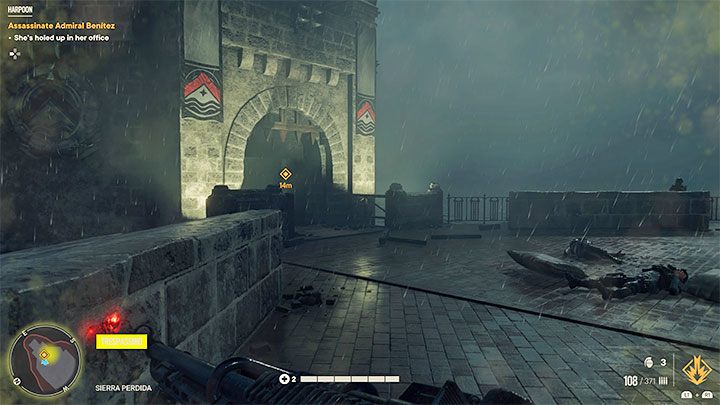 Ultimately, you must make your way to the upper walls of the fortress. There are various staircases leading there. Remember to keep an eye on the radar to avoid being surprised by an enemy attack from behind.

Admiral Benitez is hiding in an office in the tower. Once you try to approach the tower, she will lower the bars. You will have to wait to receive new guidance until Yelena and Jonron have a closer look at the blocked passage. 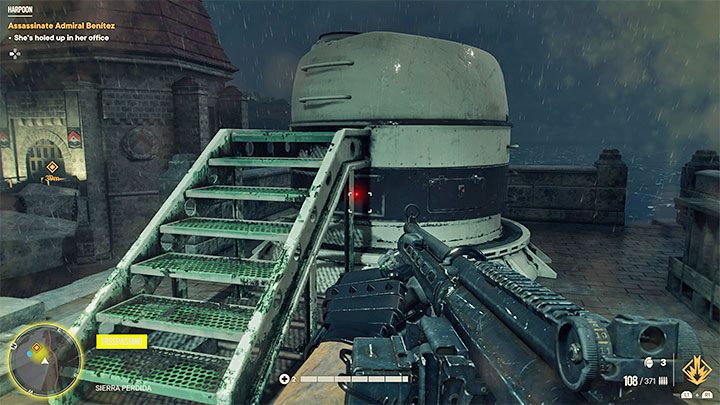 Examine the cannon shown in the picture, which is located on the walls of the fortress. You may want to use the small staircase and take a seat in the cannon operator's booth. 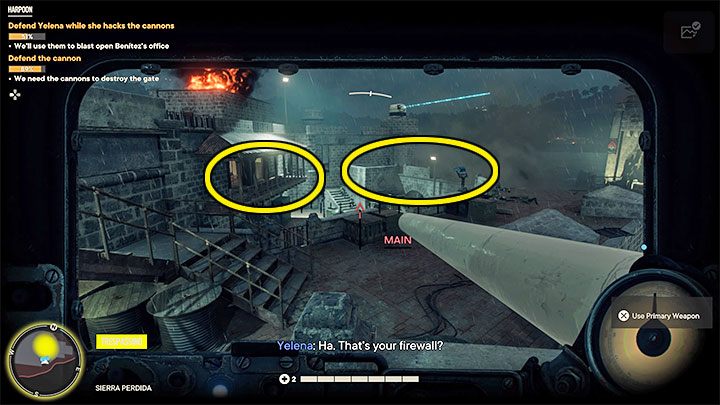 As for now, refrain from firing at the tower bars with the Admiral hiding behind them. First, you will have to defend yourself against enemy forces. We have marked the recommended areas to perform the cannon attacks.

Aim your cannon primarily at enemies equipped with launchers, as they deal the biggest damage. Some of them may also appear further to the left. Apart from that, target groups of enemies and soldiers close to Yelena. Remember that the cannon takes some time to reload after each shot. 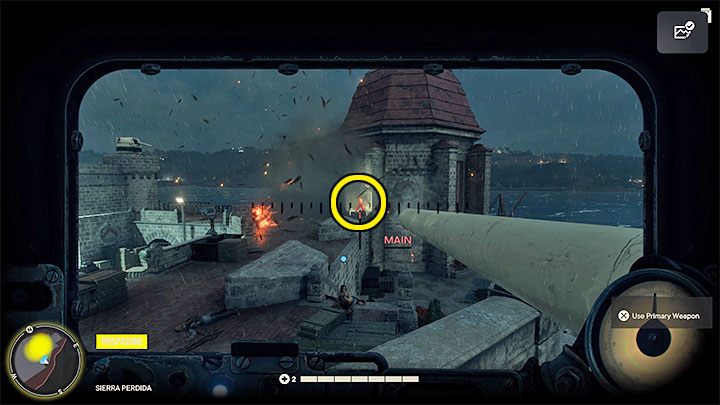 This is a very simple task. Aim for the fort tower door that you couldn't get to before - we've marked the location in the image above. 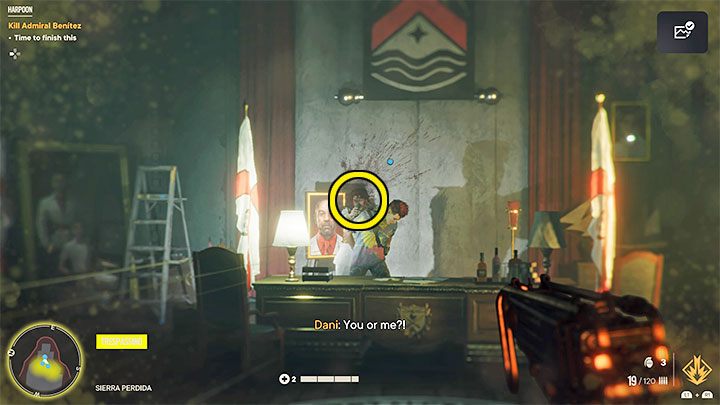 Set off towards the office located in the tower. A cutscene will play, during which you will have to shoot Benitez who is holding a hostage. Wait a second for the perfect moment to aim at the Admiral's head and fire a single shot using your handgun.