This page of the Far Cry 6 game guide contains a walkthrough of operation Break the Chains, one of the main missions in Valle De Oro. Our walkthrough explains, among other things, how to infiltrate the Castillo National Zoo, how to rescue the prisoners and how to download the surveillance footage. 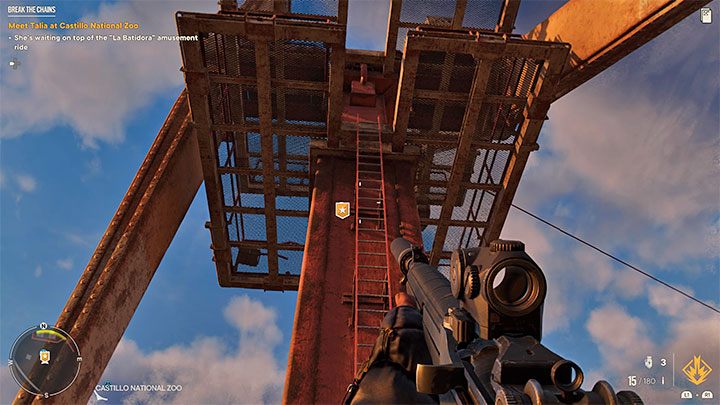 This is one of the operations that will become available when completing the main quests in Valle De Oro.

This quest is commissioned by Talia Benevidez and to meet her, you will have to travel to the local zoo, which is located north of Feroza town. Talia is staying on the large metal balconies of one of the theme park attractions and you can reach her using a ladder. 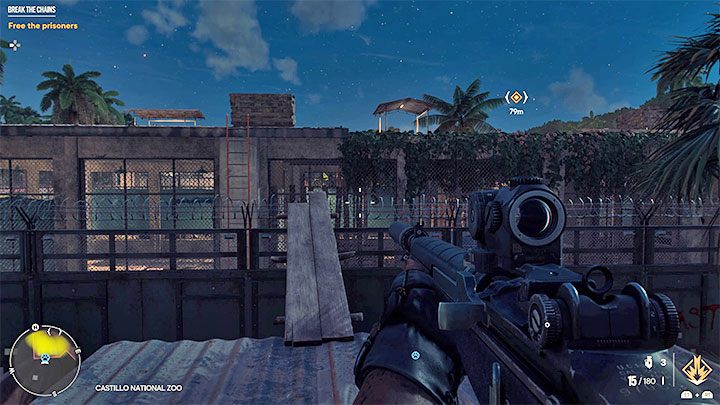 Set out for the indicated location, which is under military control and which is surrounded by high walls and barbed wire. The main entrance to the former zoo grounds is locked and requires a key (you will only be able to get it at the zoo).

Set off to the right and travel along the fence until you reach the spot from the screenshot. You can climb up here and walk the boards over the fence to infiltrate the zoo. 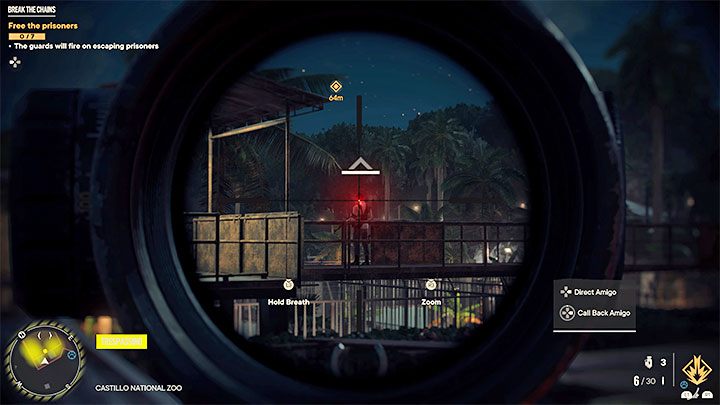 It's a good idea to get to the rooftops or upper balconies in the zoo to survey the area a bit and to start quietly disposing of the soldiers in the area - try to attack single enemies first.

If the alarm is raised too early, not only "regular" reinforcements, but also a helicopter could appear in the area and you might be forced into avoidable, intense fights. 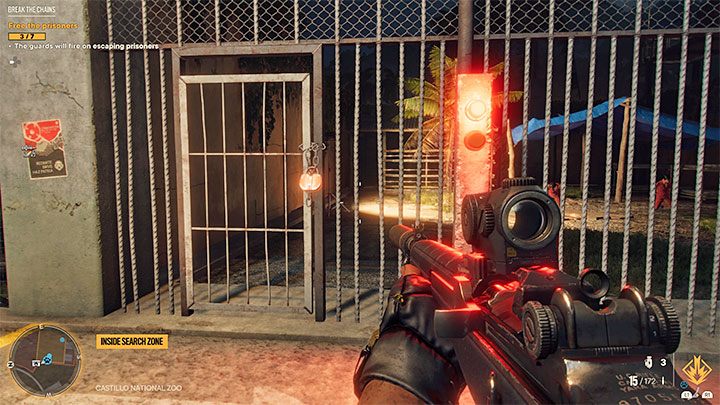 There are a total of 7 prisoners to be released. To reach and free your allies imprisoned in large cages, first you will need to destroy the padlock on the cage door. 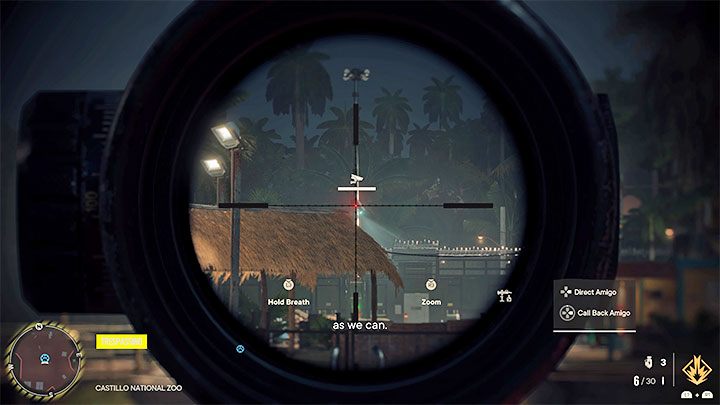 You must head towards the indicated security room, which is in the central part of the former zoo. If you are still trying to sneak your way through, then dispose of the nearby sniper from a distance and destroy at least 1 security camera you find.

Inside the room, interact with the security computer. 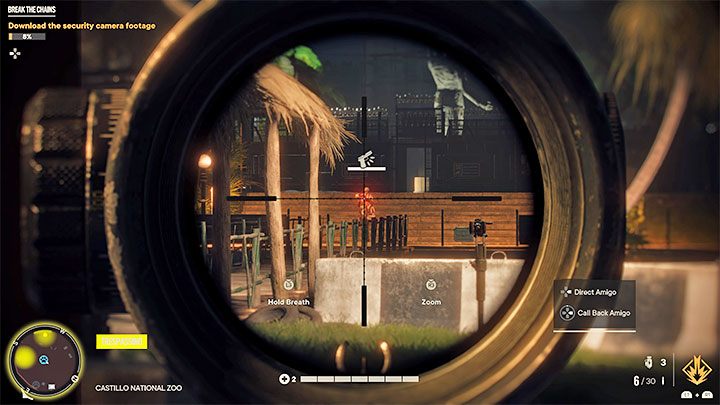 Once you start downloading the recordings, reinforcements will start appearing in the area even if you have remained hidden until then.

Watch the radar readings, which will show the approximate positions of the enemies - anticipate them to come from the main entrance of the zoo. You can attack enemies from a distance, as well as defend yourself near the security room and retreat quickly inside the building in case of concentrated gunfire. 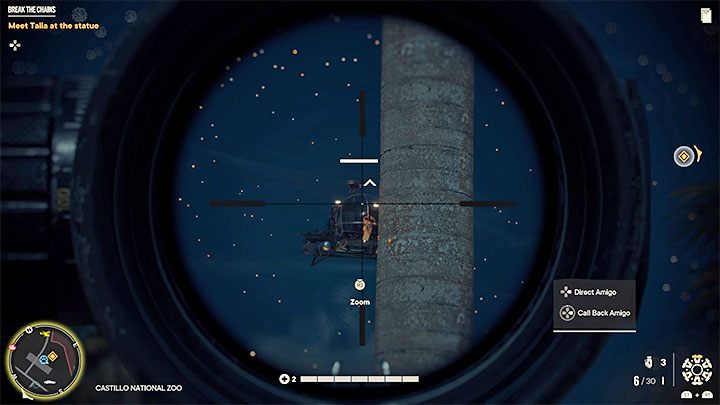 The appearing enemy soldiers may also be accompanied by a helicopter. As a reminder, helicopters are best destroyed with a launcher or the Volta supremo, although you can also avoid being fired at by hiding in a building.

You have to defend yourself until the download bar reaches 100%- it's visible in the top left corner of the screen.

Meet Talia at the statue 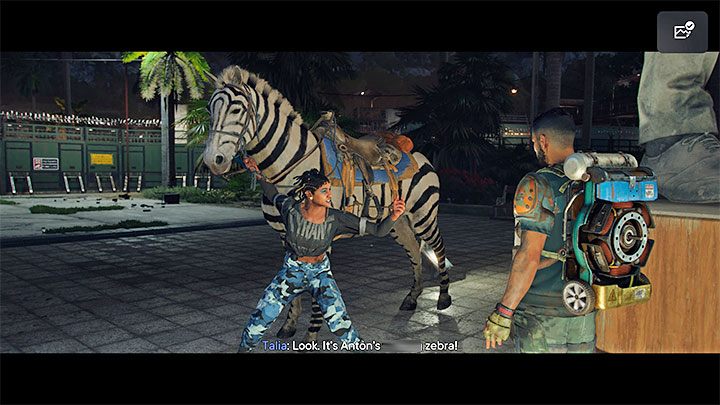 You will only receive the objective to meet Talia once you have completed the download process AND disposed of all the reinforcements that have arrived at the zoo. If the game doesn't want to advance the quest, then look around near the zoo entrance for enemies that didn't make it near the security building.

When you reach the statue, this operation's final cut-scene will play, during which you will also see a zebra-striped horse, which is the unique reward for completing the mission.