On this page of the Far Cry 6 game guide, you will find a walkthrough of operation Meet the Legends, one of the main missions in the El Este region. The guide describes where to search for Legends, what to do during the mountain climbing and how to reach the Patriotas Peak guerrilla camp. 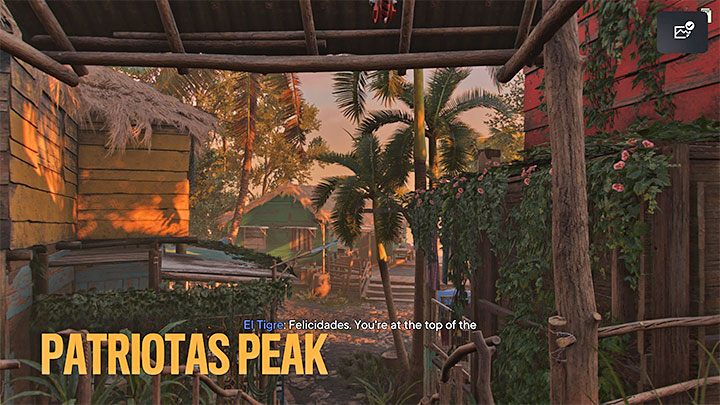 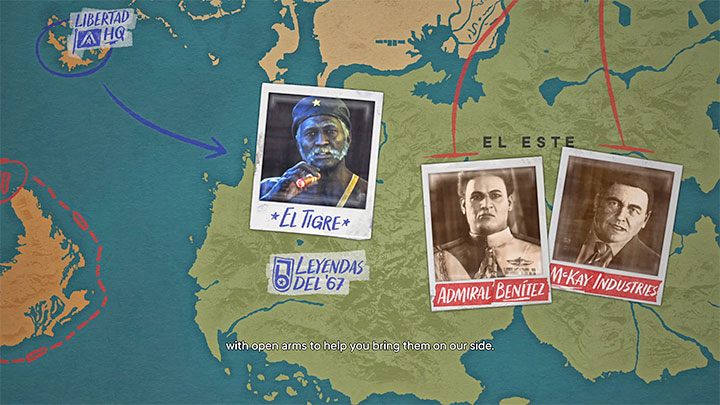 It's one of three new operations (main missions) unlocked after completing the prologue to Far Cry 6 - that is, The Guerrilla main quest. During your meeting with Clara on Libertad Island, you will learn about the El Este area, specifically about potential allies (including El Tigre) and antagonists (Admiral Benitez and El Yanqui McKay) from that part of the world map.

Note - The default recommended rank for this mission is 3. Try to explore more of the first island and advance to a rank in which encountering tough opponents in the El Este region isn't a problem. It's also important to know that the region's initial rank can increase during the course of the campaign.

Meet El Tigre at the Legends of '67 camp 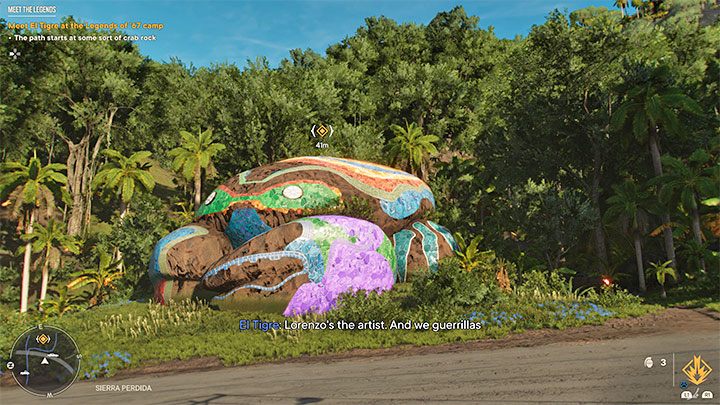 You have to reach the mission marker in Sierra Perdida in the El Este region. Shortly after entering this part of the island, you will receive a message on your smartphone with pictures of objects that can guide you to the Guerrillas Hideout. The first is a sculpture of a large crab. 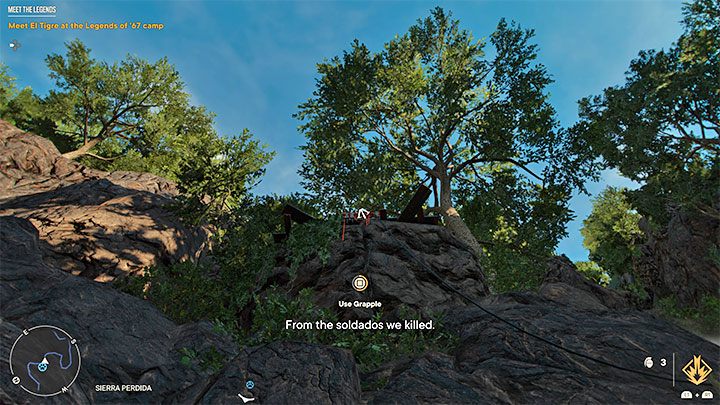 You have to take the path next to the crab leading to the top of the mountain and then climb for a long time. Be careful not to fall into the abyss because it can kill your character (if you can't deploy the parachute), or at least you will have to repeat the last few steps.

You will have to use the climbing kit frequently, and you can find the first interactive grapple near the waterfalls. 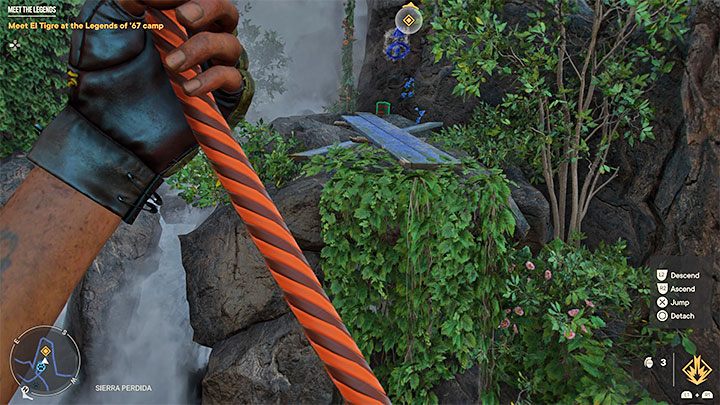 For some parts, simply climbing the rope may not be enough. Additionally, you might have to swing on a rope and, in that case, wait to jump when you are close enough to a new rock ledge. 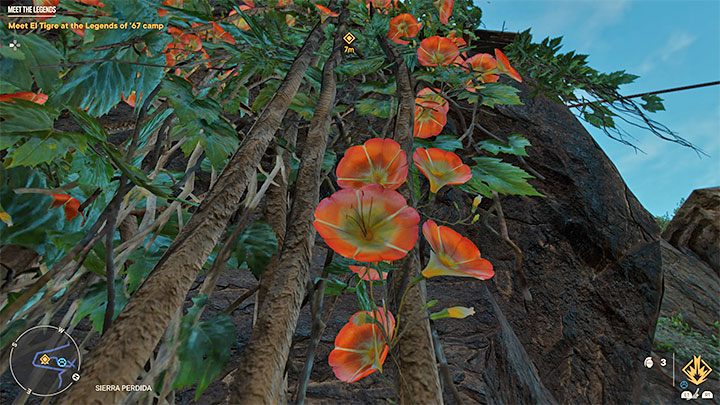 Another new mechanic not present in previous main missions (though appearing in optional quests) is climbing lianas. It is very simple, and the only problem you may have is with noticing the place to climb.

During the climbing, you will also have to use the zipline option, but it's a very common mechanic. 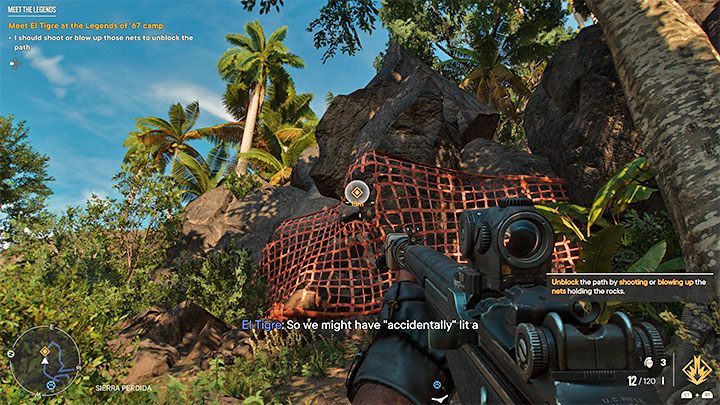 Later, you will encounter obstacles in the form of large rocks several times - an example is shown in the attached picture. The solution to this problem is simple - shoot the boulders with any firearm to break the knots in the nets. The boulders will roll down into the abyss, unlocking the passage for you. 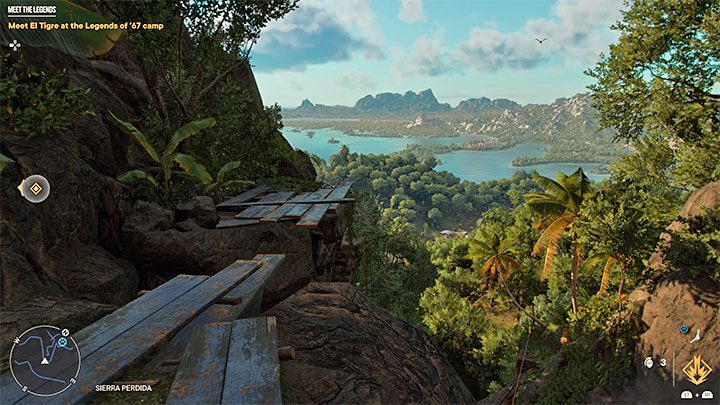 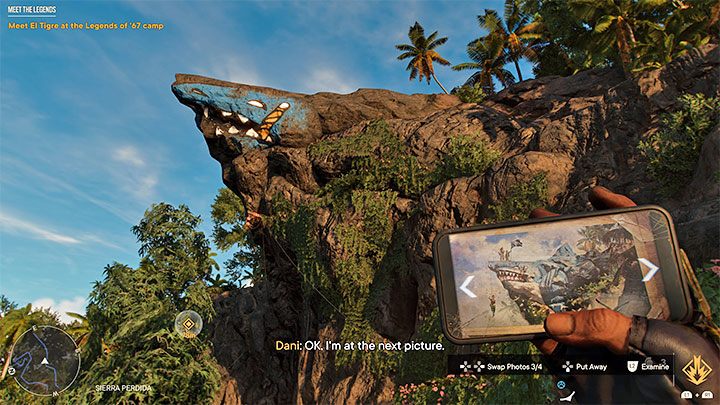 Later you won't be surprised with any new mechanics - you will have to use the climbing kit and destroy the nets holding the boulders. Along the way, you will find, among other things, a second "work of art" from the photos you received earlier, confirming that you are following the correct path. 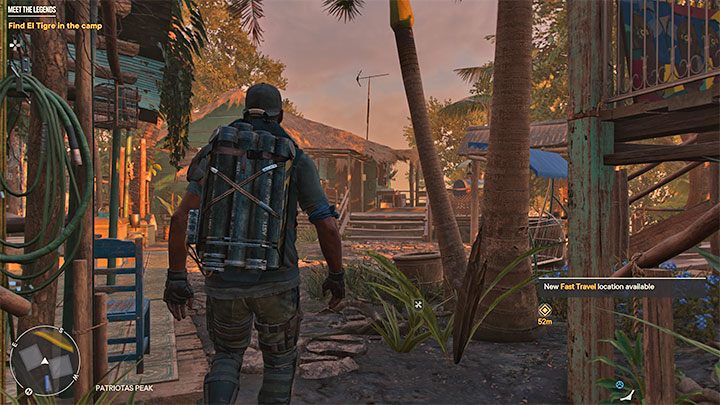 Eventually, you will reach the Patriotas Peak Guerrilla Hideout, where the game will automatically change the view for TPP.

Go to the main camp area and watch a cut-scene from the first encounters with El Tigre and the other Legends.