On this page of the Far Cry 6 game guide, you will find a walkthrough of the operation Sundown, one of the main missions in the Madrugada region. Our tutorial describes how to climb the church tower in Vedera, how to protect Alejandro during the fight in the city, and how to escape in Philly's truck.

Preparations before the mission 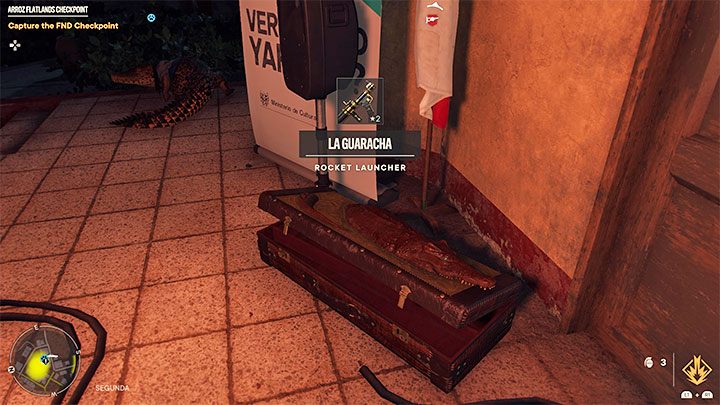 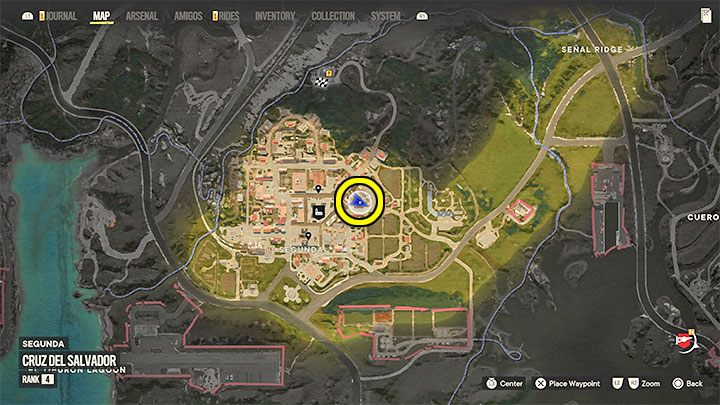 This is one of the later main quests related to the Madrugada region and the character Carlos Montero. Complete other main quests from this region first, which we've described on the previous pages of the guide.

You have to prepare extra for this mission, as it includes a tough battle where you defend yourself from enemy vehicles and helicopters. We recommend equipping any rocket launcher, which will make it very easy for you to blow up enemy machines. Tips on how to get this type of weapon can be found on the Rocket launcher - how to obtain? page. For example, you can visit Segunda in the southern part of the Valle De Oro region. In the large box, there is a unique La Guaracha launcher.

Reach the church in the town of Vedera 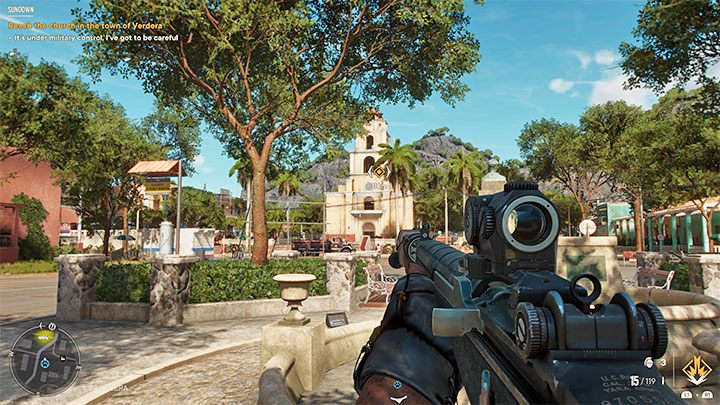 Meet Carlos at the rebels hideout on the Montero Farm. A cut-scene of determining the action plan will play. The town of Vedera is located northeast of the farm. It is a good idea to enter there with the weapon hidden to avoid alarming the surrounding enemies.

The church is located in the central part of Vedera, on the market square. When you approach it, you will receive updated guidelines.

Find the sniper rifle inside the bell tower 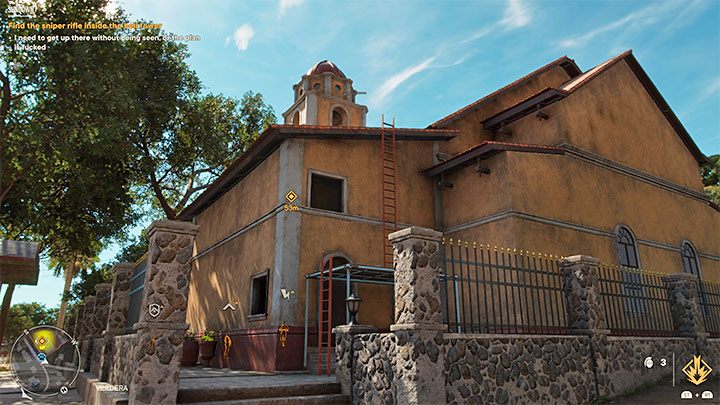 Do not attempt to enter the church through the main door. Instead, go to the back of the building, where you will find the ladders shown in the picture. They will allow you to reach the church roof and then cross from there to the church tower.

An important cut-scene will be played, and unfortunately, you won't be able to influence the course of events. Also, you don't have to fire any shots from the tower.

Carry Alejandro to safety before he dies 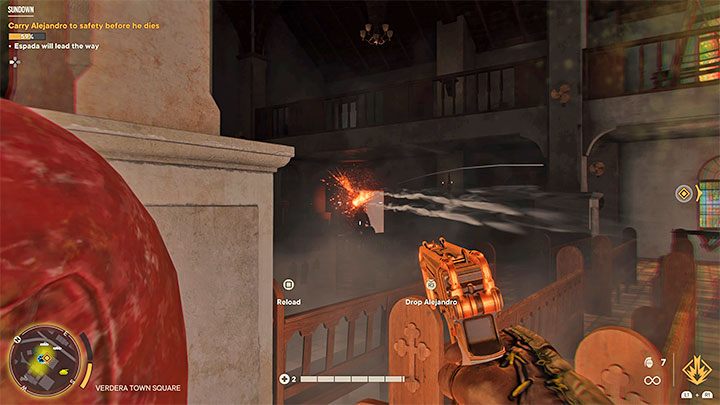 Approach the badly injured Alejandro lying on the ground and press the right analog knob to carry your ally.

When playing the escape scene through the city, we recommend using a hand-held weapon to kill enemies - this can be a regular or submachine gun. You will have temporarily unlimited ammunition for your weapon, but it still needs to be reloaded. You can put Alejandro back on the ground, but this runs the risk of not having enough time to save him before his health (upper left corner of the screen) drops to 0%. Do it only if in find yourself in a very dangerous situation. If you take a lot of damage while running away, look for opportunities to get behind walls and other obstacles to avoid being an easy target for enemies. 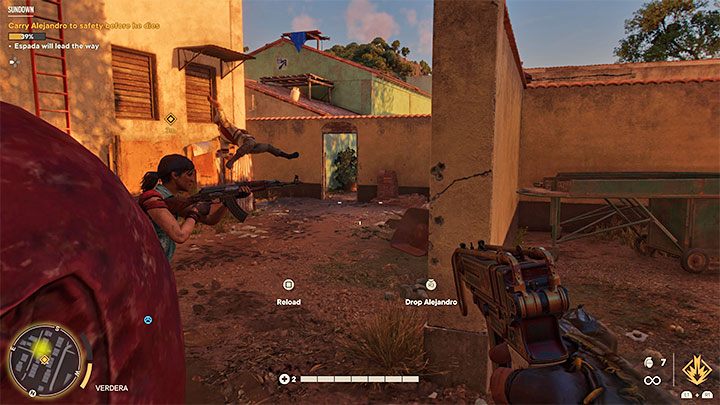 Stay close to Camila the whole time and follow her on the imposed route through the city. You need to get to the point where Alejandro will be packed on the truck. The escape scene will begin. 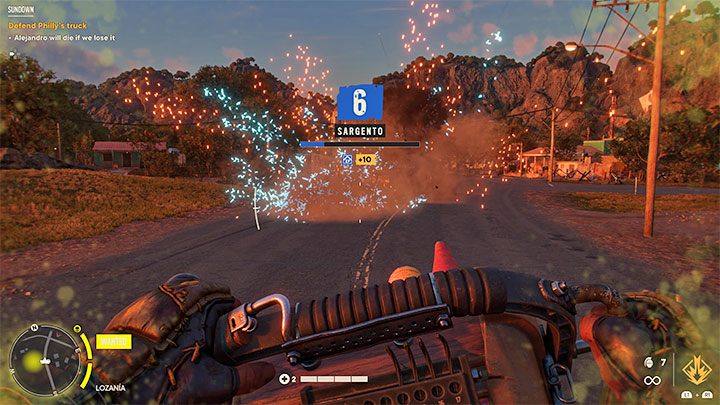 The escape is very challenging, and that's because no cannon has been mounted on the truck. As a result, you will have to rely entirely on your weapons (ammunition for them will be temporarily unlimited). The back of the nick is exposed, and it'll be crucial to destroy enemy vehicles quickly and kill any enemies that appear.

Getting rid of enemy vehicles can be difficult if you are using, for example, a rifle There is a high risk that the exchange of fire will deprive the hero of a large amount of health. Don't jump out of the truck - even if it stops, it can easily be destroyed, and you will fail the mission.

For destroying enemies in jeeps and on quads, a rocket launcher will do the work. With some luck, a single hit will destroy an enemy vehicle. The game allows you to fire unlimited rockets from the launcher, but just like the other weapons, you have to reload it. 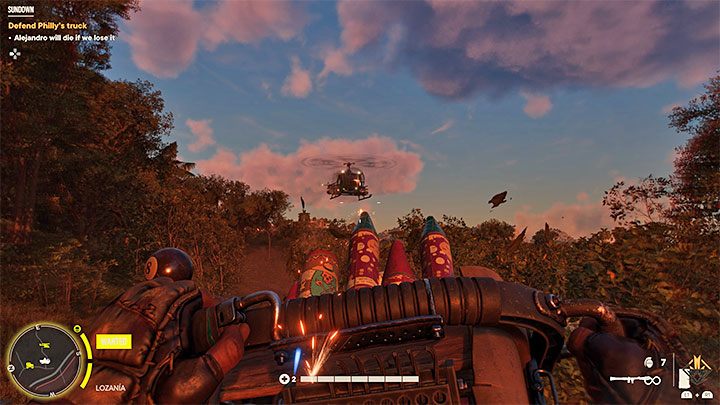 In the later part of the chase, you'll have to defend yourself from 2 helicopters. Again, use a rocket launcher in these encounters. As these are smaller variants of helicopters, you shouldn't need to hit them more than 2 times to destroy them.

Continue the escape until you return to the area of Montero Farm. There, you will watch several cut-scenes, which will end the mission. 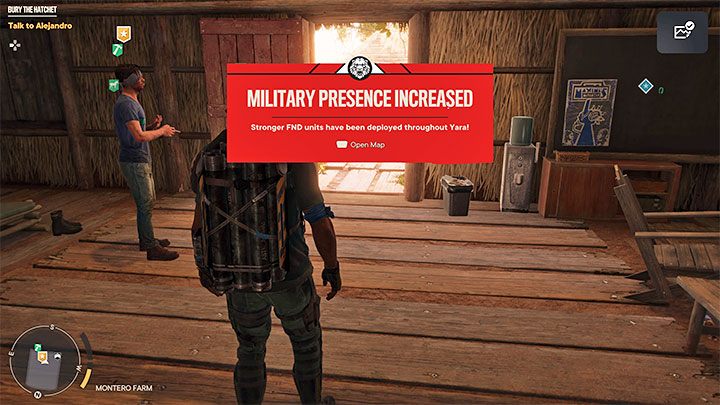 Completing this mission increases the ranks of all regions of the game world. They will simply become more challenging. Fortunately, you don't have to fear a significant increase in the campaign's difficulty level, as by doing the main and side missions, among others, you'll still be able to gain large amounts of XP to advance your hero to the next ranks.