On this page of the guide, you will find a set of starting for Far Cry 6. Our hints and tips cover many important topics related to the main gameplay mechanics, such as combat, stealth, exploration, using different pieces of equipment, or the help of allies.

Use radar to read icons and enemy positions 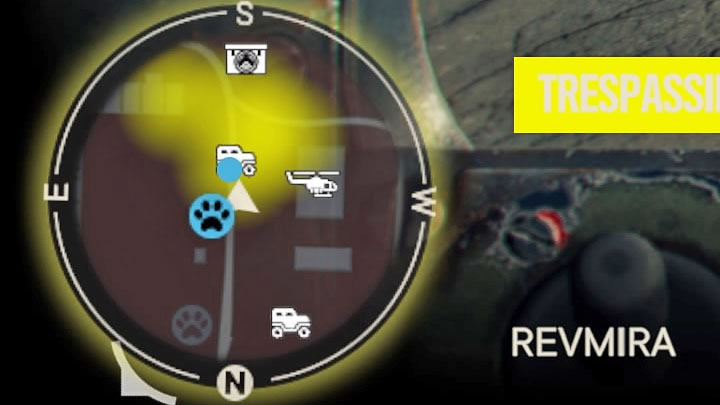 Radar is available in Far Cry 6 from the very beginning of the campaign - you will find it in the bottom left corner of the screen. This is a very useful gadget, as it has several completely different uses. The most important of them is the approximate location of enemies - they are symbolized by different colored circles. You can better prepare for a possible confrontation or use this knowledge to avoid that area.

Another important use of radar is the icons that can symbolize various things, such as vehicles (pay special attention to the yellow and red ones indicating enemy-controlled machines) or chests with loot.

For more tips on traversing the island and finding loot, check out the Exploring the game world page. 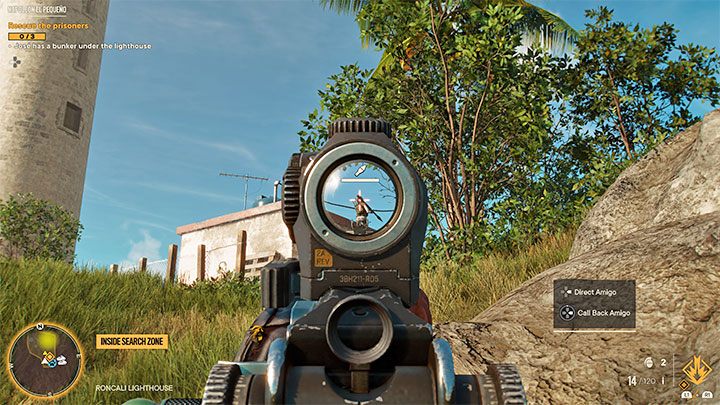 Far Cry 6 has brought back the RPG health bars fromFar Cry New Dawn. They appear above enemies' heads by default (they can be hidden in the game options, although the mechanic itself will remain active). This simply means that enemies in general are more resilient to attacks (so-called bullet sponges). However, the most important note is that hitting an enemy in the head does not necessarily mean instant death. Headshots deal more damage, of course, but the death of the opponent depends on the amount of damage received.

You can reduce the described "problem" in several ways:

For information on how to hide the enemies' health bars, see the separate page Health indicators - how to turn them off?.

Get as much intelligence as possible 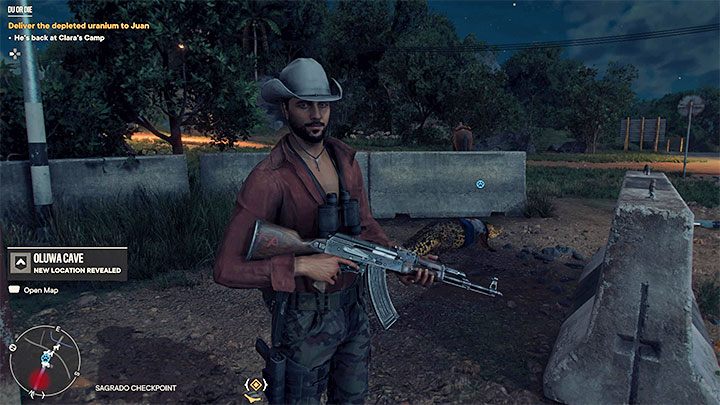 In Far Cry 6, map exploration alone may not be enough to find all the activities and all the major types of loot. In order to do so, you need to gather Intel, which reveals new interesting locations/chests with loot and mark them on the map.

There are various ways to obtain Intel in the game, the two most important being:

Information about new Intel always appears above the radar (example in the image above).

Try to perform reconnaissance before entering any hostile location 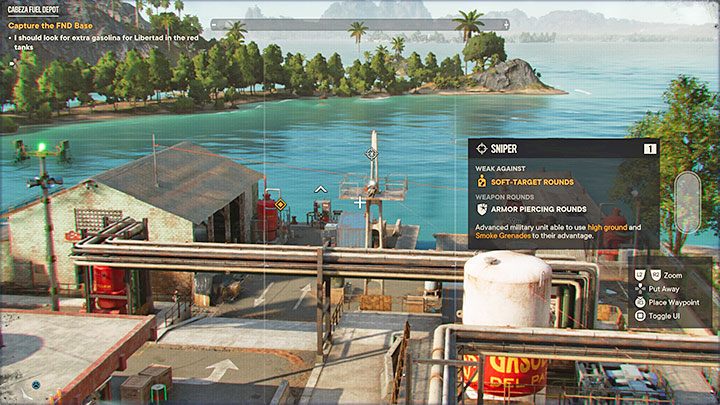 In Far Cry 6, you don't use binoculars for reconnaissance, you use your smartphone camera. The general idea, however, is the same - you can zoom in on the view and tag important characters and objects. If possible, try to prepare to infiltrate every major hostile location by starting your reconnaissance on a nearby hill, tower, or other location from which you can clearly see the surrounding area.

Pay particular attention to the following when scouting an area:

You can find more tips and tricks about scouting on the Enemy outposts - how to take over? page.

Enemies are safer to eliminate when using stealth 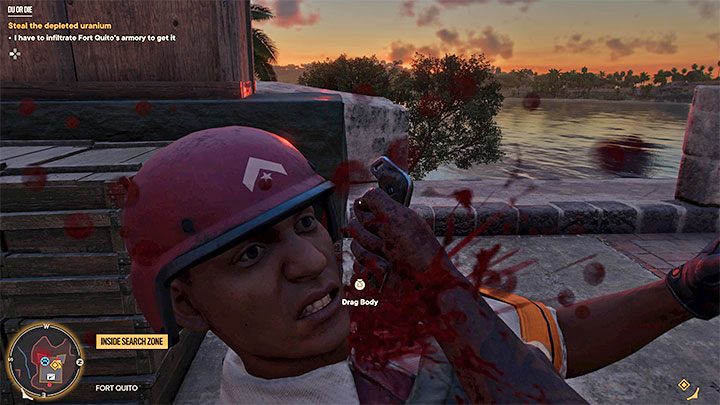 Unfortunately, direct combat Far Cry 6 carries a high risk of receiving serious damage or even death. This is particularly evident in the early stages of the game, i.e. before acquiring good weapons and equipment. You should, therefore look for good opportunities to eliminate enemies by using stealth attacks. Here are some key tips:

For more tips and hints, check out the Combat and stealth page. 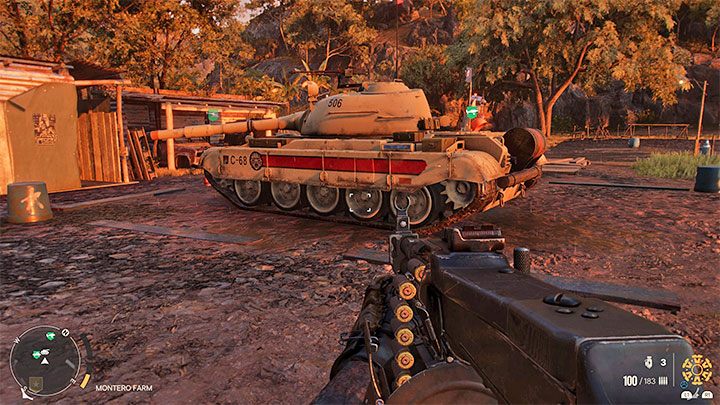 In Far Cry 6, you can quite easily get very useful means of transportation that can help you move around the map or fight enemies. Try to look mainly for military vehicles (off-roaders, Humvees, tanks, helicopters, etc.) because they almost always have some kind of offensive equipment, such as a cannon, rocket launcher, or machine gun. Some of these machines stand unused in enemy military outposts. You can also try to steal them by throwing their drivers out of the cab.

The so called Rides are also useful. You gain access to the first one during the Fuel the Revolution main mission in the early stages of the campaign. You can equip your Rides with weapons and reinforce their armor. Spend your crafting materials on these upgrades on a regular basis.

For more information on finding, using, and "keeping" good machines, see the Vehicles and other methods of transportation page. On the Tank - how to steal? page, you will also find tips on how to acquire and permanently keep a very useful tank. 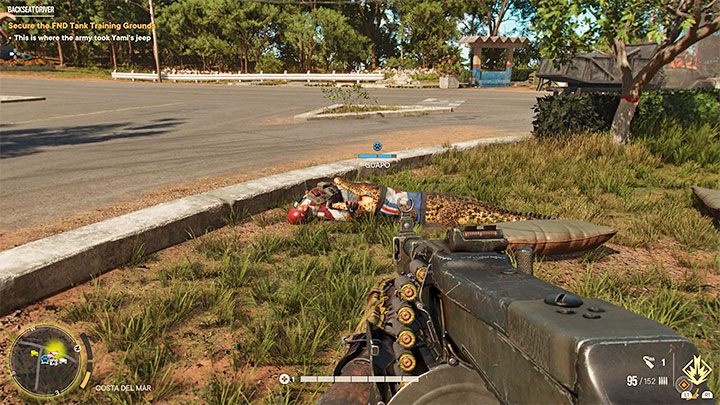 Guapo is the name of one of the Amigos, i.e. pets that can accompany the main character. You will get the crocodile very early on in the game, specifically by starting an operation called Juan of a Kind unlocked shortly after completing the prologue.

Guapo is perfect for attacking single enemies. However, try to select weaker enemies for his targets so that the crocodile can kill them. The attack itself can also distract other nearby enemies and make it easier for you to plan a surprise attack or sneak past them. Guapo can be knocked down but it cannot die - you can resurrect the crocodile or wait for it to "come back to life" on its own.

More information about Guapo and other pets can be found on a separate page - Amigos - Pets.

Improve and replace your equipment on an ongoing basis 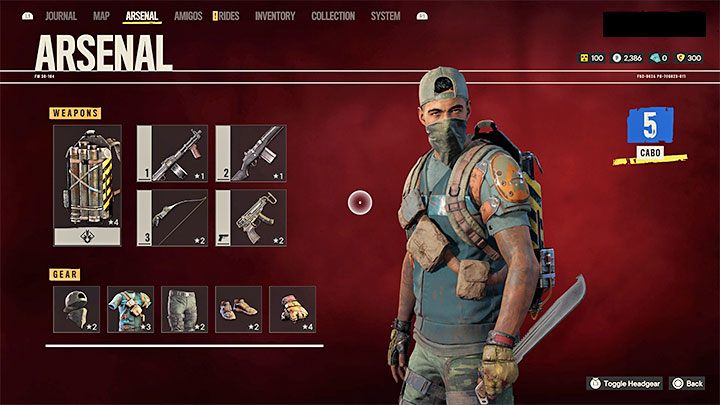 In Far Cry 6, you can increase your hero's combat capabilities by equipping them with better equipment. Mainly:

More information on upgrading the character's equipment can be found on the Character development page. 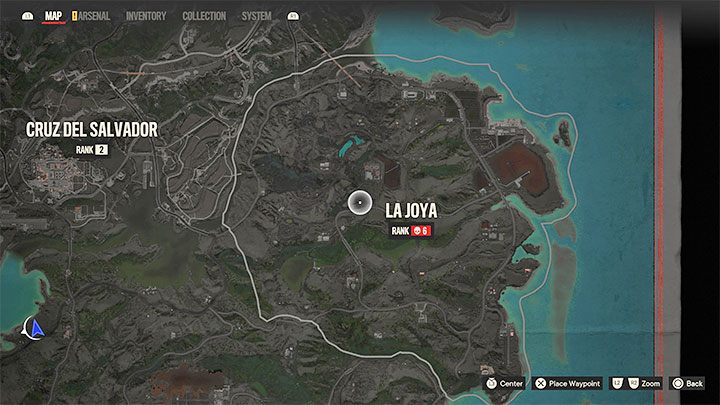 The world map in Far Cry 6 is divided into regions and each region has its own rank. The higher the rank of a region, the more difficult it may be for you to win battles there and stay alive - expect to encounter stronger opponents with better equipment. Fortunately, there are plenty of low-rank (1-3) locations to explore - this is where you should start.

Missions also have ranks. Taking on a high-ranking quest can easily end in failure if your hero has not yet increased their rank and acquired better equipment. Again, we recommend starting with low-rank missions. Leave more difficult quests for later.

You can find more information about gaining experience points and leveling up your character on the Ranks and XP - how to increase? page. 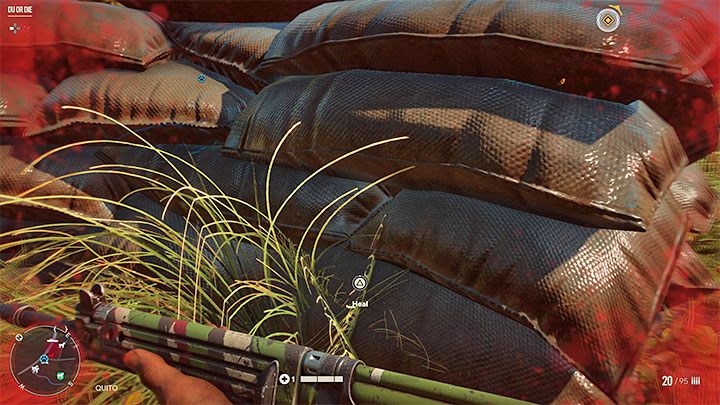 In Far Cry 6, you can easily find yourself in a life-threatening situation. The health bar appears at the bottom of the screen, but serious damage is also indicated by red spots appearing at the edges of the screen. Try to respond quickly to these types of situations:

Don't waste healing charges between the fights - wait for the hero's health bar to regenerate itself. For more information and tips, go to the Healing - how to restore? page.