Exit the hut and begin moving forward, towards balconies leading to other sections of the compound. Keep going straight and don't stray off the path, because you don't want to get lost. Eventually you should be able to get to a roof that's being guarded by one of the wildmen. Kill him and get ready to dispose of a few Trogs as well. A rather large group of monsters will appear behind you, so you must be ready to engage them. Once they're gone focus on getting to a large pipe located in the south-eastern corner of the roof [#68]. 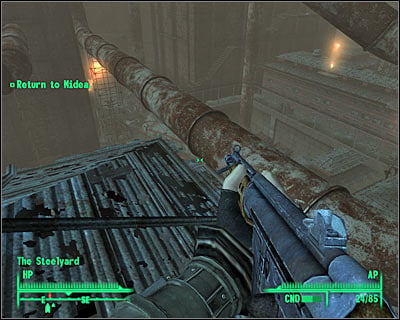 Make a few steps forward while standing on a pipe and notice that one of the monsters is "guarding" two ingots. Kill the beast from a larger distance and collect your rewards.

Once you've taken both ingots from a large pipe turn around and start moving forward (west). Don't change that direction even when you get to an another section of the roof. Go to the edge and slide down. Turn right, so you'll be facing north and locate a small passageway between two buildings [#69]. Go there now. 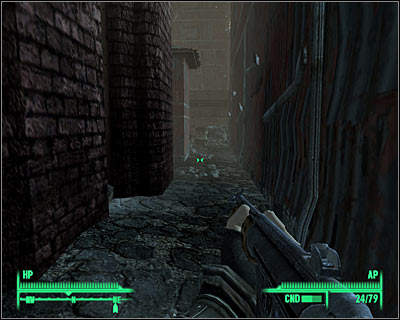 You can now either go to the other end of this passageway or you can turn left at the first chance you get, choosing another narrow alleyway. Either way, you should be able to find an area where the Trogs are attacking wildmen. Human opponents will probably prevail, but you should wait for the monsters to at least injure them. Deal with all hostile units, collect ammunition and take a look inside the main cart. There are four ingots here, as well as a medical kit and even more ammunition.

Once you've won and collected all valuable items proceed to the north-east and then start moving east. Make sure that you stay close to the large fence and turn right when it blocks you from moving forward. Go to the other end of this alleyway and locate a body of a dead slave. There are two ingots here. Furthermore, you can collect a combat shotgun with some ammunition. This is a very useful weapon against the Trogs.

You'll now have to take a long walk, going back to the stairs where you originally found Wild Bill's body and defeated the wildmen. It shouldn't be too hard, because you're nearby. Once you've arrived at the small shack go to your right once again in order to use the upper balconies. Keep using the same path as before until you reach a new roof where you already defeated a single human opponent. This time ignore the pipes and lower parts of the roof. Instead find stairs leading to the upper sections of the factory [#70]. 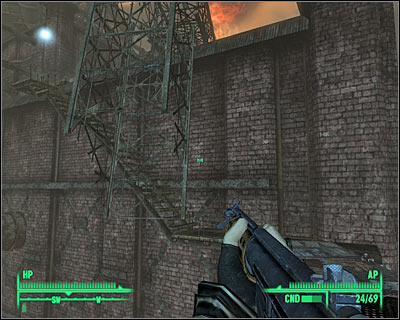 Once you're standing on a metal roof go to your right and you should notice a new staircase in the distance. Ignore the stairs for the time being and instead be on a look out for a small passageway which is going to be located to your right. Go there and explore the surrounding area. The north-western corner of the roof is being guarded by a single beast. Kill the Trog and find four ingots. You should also examine contents of two medical cases.

Get ready for a very long and for a very difficult journey. Make sure that the main character has been healed and take your time to organize his equipment. Go back to the previous area of the roof and proceed to the stairs mentioned before [#71]. Using these stairs will allow you to get to the top level of this huge structure. Be careful, because before you even get to the stairs you'll notice a small area in front of you. It may be occupied by a human opponent or by monsters. Get rid of these threats before moving on. 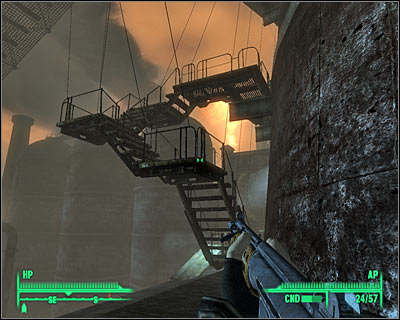 You'll now have to begin moving upwards. You'll be using relatively small balconies and you may encounter a lot of threats along the way, namely more wildmen. Be careful, because some of your opponents may occupy upper levels, so you won't notice them right away. Use your assault rifle or a sniper rifle to get rid of them. Make a stop once you've reached a huge platform and kill a few thugs from here. You must now begin RUNNING westwards. Take cover behind the nearest pillar. Notice an enemy turret nearby. You can destroy the turret with one of your weapons or you can disable it by hacking into a security terminal [#72] Make sure that you've spent at least 50 points into Science skill, because otherwise you won't be allowed to use the terminal and that'll leave you with having to destroy the object. 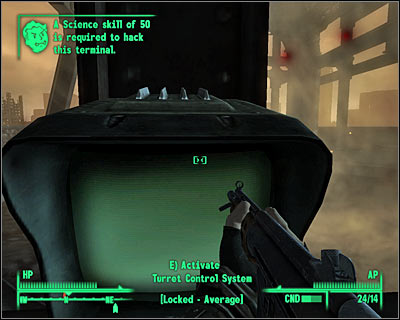