Theoretically you could exit the plant by using the same path you've chosen before, but it would take too much time. There is a much shorter route, however you will be forced to deal with a couple of Trogs along the way. The first group of the beasts can be found on the opposite end of this room and you must be ready to kill at least one more Trog coming out of a nearby corridor [#62]. Kill the monsters and go to that corridor. Eventually you'll get to a closed door. Use a nearby panel to open it and you'll end up standing inside the first room of the plant. Exit the building using the door on your right. 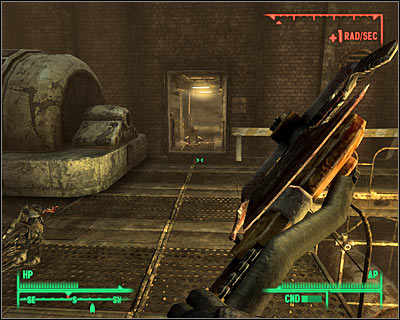 You'll now have to return to the upper sections of the factory complex and this means using the stairs and a small bridge made out of wooden planks. You've already explored the alleyway to your right, so now you should go to your left. Don't plan too far ahead, because you'll have to make a stop almost right away. There's a small building to your right and obviously you must enter it. Aside from two new ingots you'll also find RadAway's, purified water and a couple of stimpacks. Be careful on your way out, because you may be surprised by a single Trog.

Proceed to your right and keep moving forward until you reach the stairs by the left building [#63]. The stairs can be found just around the corner. Remain on the main street and you shouldn't have any problems getting there. 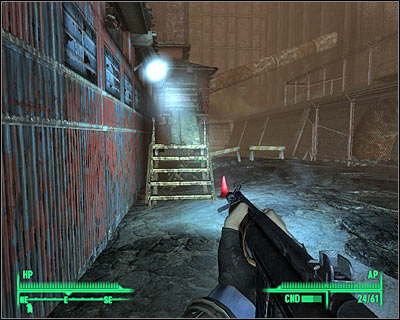 Use the stairs to get to the roof of this building. Turn around and move to the corner of the roof located closest to a new large container. Make a jump from the roof in order to land inside the container. There are new ingots here. 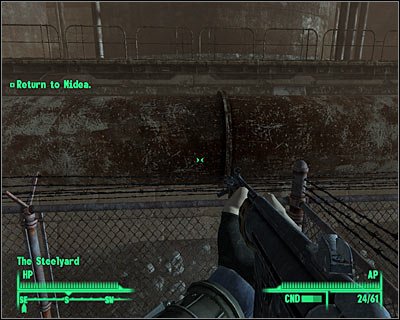 Move back a little, start running towards the fence and press the jump key at the very last second. If you did everything according to the plan you'll end up standing inside an isolated area. Go to your right and keep going straight until you find the body of a slave. Take the ingots.

Getting out of there shouldn't be too difficult. All you have to do is to move back a little, look up and locate a few wooden boards. Get on top of the boards and you won't have any problems jumping over the fence with the barb wire. You could now go left (towards the stairs), however I would recommend going back to the container from where you made your first jump. In order to do that keep going next to the fence and when you reach an opening turn around. You'll once again end up standing near the stairs leading to the roof of the building. This time ignore the stairs and proceed forward [#65]. 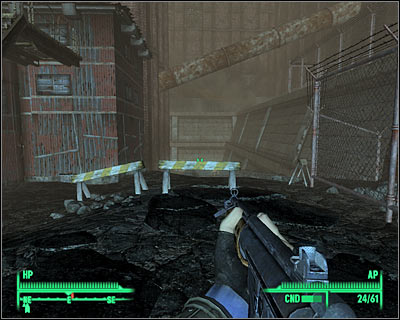 Watch out for a single Trog, because you may be attacked by the monster very soon. Instead of going all the way to the end of the path look for an opening to your left. You should end up standing between two buildings. Move forward but make a second left turn as soon as possible. There are going to be at least two Trogs here and it'll be up to you to get rid of them quickly. Collect two ingots and don't forget to loot bodies of killed monsters for extra equipment.

You must now go back to the main path leading to the lower sections of the complex. This is where you've been attacked by a single Trog. Go all the way to the end and notice that you'll be dealing with radiation here. Thankfully the radiation will be small (1-2 rads per seconds). Locate the body of a dead guard. Inspect the body in order to collect frag grenades and a Gamma armor. The armor is a very useful object, because it'll increase your protection from radiation. Wear the armor and finish off by taking three ingots.