You must now proceed to the central area of The Mill district. You've probably encountered a locked gate here before. You can finally go inside [#22], because this is the passageway leading to the area where the fights are being managed. Talk to Spook along the way, however it's going to be a relatively short conversation. Use the stairs to get down to a lower level and find Faydra. You can ask her about the rules, additional equipment, your enemies and you can tell her that you're ready to begin. 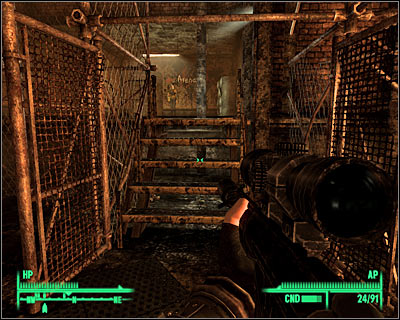 Thankfully the first round won't begin automatically. It's a good thing, because you'll want to spend some time preparing for what's about to come. I would strongly recommend that you use your equipment from The Steelyard quest, including the rewards given to you by Everett. You should have at least one Gamma armor in your possession. Wear it, because it grants protection against radiation. As for the guns, an assault rifle should be more than enough to win the first round, but you'll probably need something better for two other rounds. Ignore a locker pointed to you by Faydra [#23], because you'll find a very weak weaponry inside, including a pistol and some melee weapons. Make sure that you've used RadAway's and stimpacks before moving on with the fights. When you're ready approach a small hatch and confirm that you want to enter The Hole. 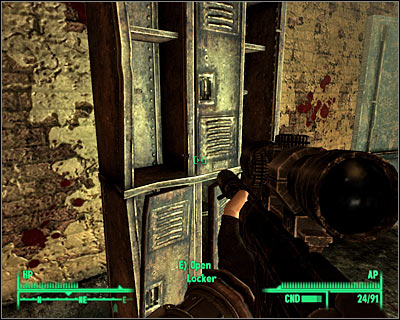 WINNING THE FIRST ROUND IN THE HOLE

The biggest problem with all three fights is going to be radiation. You'll be dealing with very large doses, up to 10 rads per second. As a result you will have to focus all of your efforts on ending each round in under sixty seconds, because otherwise the radiation will become critical and you'll risk a chance of losing your life. The first round will require you to go against three armored slaves [#24]. Each opponent will be equipped with a medium-size gun. I would recommend that you start by eliminating a thug who is armed with a combat shotgun. Remember to attack him from a larger distance, because the shotgun is deadly at close range. Aim for his head and this also applies to your other enemies. Once you've defeated all three opponents you may spend some time looting their bodies or (if your radiation levels are extremely high) you can go back through the hatch to The Mill. 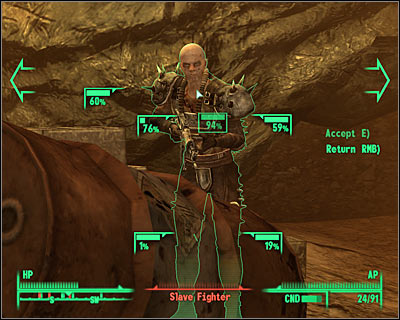 Once you've successfully returned to The Mill Faydra will neutralize all negative effects of radiation [#25], so you don't have to worry about having enough RadAway's in your possession. Sadly this doesn't apply to standard wounds. You can either treat yourself if you have a lot of stimpacks to spare or you can always head back to the Downtown district and ask Nola to heal the main character. Don't forget to reload your weapon or to choose better guns for the second round. Talk to Faydra when you're ready and tell her that you want to begin the second fight. Use the hatch to enter The Hole. 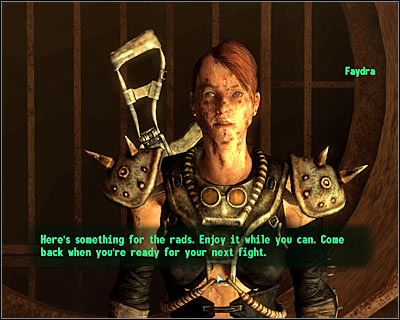 WINNING THE SECOND ROUND IN THE HOLE

This time you'll be going against well-equipped brothers. One of your opponents will be using a flamethrower and he should be the one to die faster [#26]. Remember that he can only attack you at medium and close range. Also - prevent his brother from taking his weapon once he's eliminated. As for the second opponent, he will try getting as close to you as possible, because he'll be using a Deathclaw gauntlet which is one of the best melee weapons. If you can't escape him, consider using one of the autoaxes during the duel. Just as before, you should spend some time looting bodies for extra equipment. If you don't have enough time due to high radiation levels focus only on taking the gauntlet from one of the brothers. Notice that they were both using Gamma armors, but you could acquire an identical model from The Steelyard and if you've collected more ingots you probably have something even better right now. Allow Faydra to neutralize radiation, heal the main character and confirm that you're ready for your final third challenge. 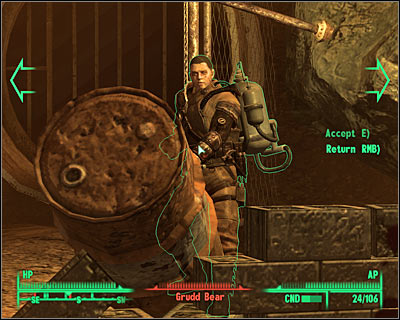 WINNING THE THIRD, FINAL ROUND IN THE HOLE

The final duel will require you to go up against a single opponent. As you've probably suspected, he will be using state of the art equipment, including a unique rifle called The Infiltrator. It's up to you how you want to play this out. You can either try getting closer to him and finish him off with an autoaxe or you can keep firing at him from a larger distance. If you prefer the second option don't forget to aim for his head. Inspect his body when the battle has ended and make sure to take his rifle. You may now return to The Mill district. Allow Faydra to treat you for the last time and take part in a conversation with Krenshaw. He will inform you that you've won the rights to have an audience with their leader Ashur. 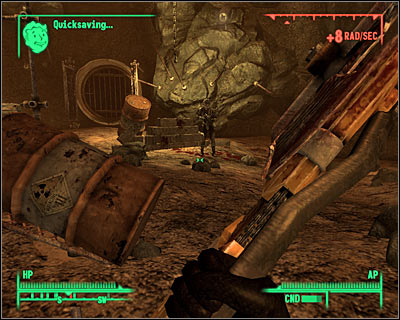