Solution: Ashur is thankfully far more forgiving than you might have anticipated, so you won't have to lie to him in order to choose the answers that would please him the most. Generally you can start the conversation by choosing one of three dialogue options shown to you on the screen. You'll only have to avoid the final fourth dialogue option, because that would automatically trigger a fight with Ashur. During the conversation you can win a couple of Speech challenges [#33], however even if you fail nothing bad will happen and you won't make Ashur mad enough to actually attack you without warning. Eventually you'll have to agree into helping him. Ashur will want you to stop Wernher and other rioting slaves. He will end this conversation by asking you to talk to his wife Sandra, because she'll have more info for you concerning their plans. Ashur will then be summoned to help out the slavers in fighting the slaves, so he'll leave the building immediately. 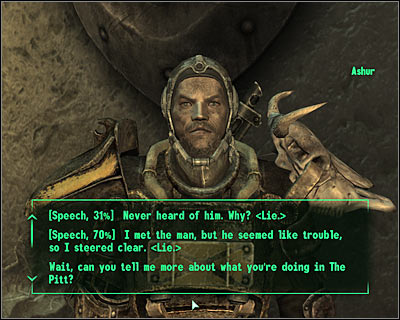 Sandra can be found in a smaller room, located to the right of Ashur's chamber. I'm sure you won't have any problems finding it, because it's a small building. Before you decide to talk to Sandra you might want to inspect a nearby terminal. The main reason is that you'll find out a lot of interesting things, including the fact that the cure is... her child. Initiate a conversation with Sandra [#34]. Similar to Ashur's situation, you won't have to be extrapolite towards her in order to acquire additional information. This scene will end in a positive manner as long as you don't decide to take the baby away from her. Feel free to question her motives if you want to. Once you're done go back to Haven entrance and then exit the building. 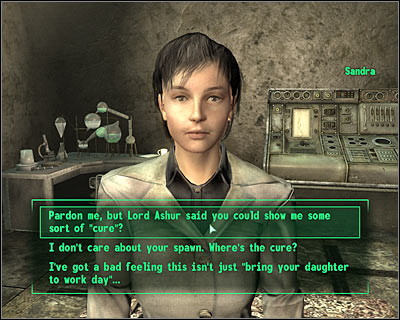 As you've probably noticed by now, intense fights are taking place in Uptown. Most of the slaves have begun attacking the raiders. Obviously you will have to avoid the slaves, because since you've already made up your mind to side with Ashur, they'll be hostile towards you. DON'T ATTACK the slaves, because that would automatically cancel any possible dialogue options with Midea and Wernher in the near future. Notice that some of the raiders will be using rocket launchers. You can wait for them to get killed and steal their weapons. Your current destination is the Downtown district and this means you'll have to return to the upper balconies. Watch out while using smaller bridges, because if you encounter a slave, you won't have anywhere to run. Locate a door leading to Downtown [#35] and confirm that you want to travel to that location. 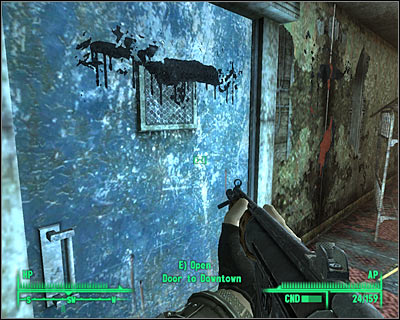 Notice that you've begun the exploration of the Downtown district on an upper balcony. As a result you shouldn't be in a lot of hurry, because you'll be safe here. Remember that you shouldn't attack slaves yourself, however you can wait for other raiders to kill them. You can also inspect some of the upper balconies and buildings on in order to interact with some of your new allies, including Harris (he sells food and drugs) and Friday (she sells and repairs weapons and armor). Be on a look out for safes and stashes, BUT don't touch items belonging to other raiders. Use the stairs to get to the ground floor when you're ready and enter Midea's Quarters. Initiate a new conversation. You can acquire the exact location of Wernher using persuasion, intimidation or force. Here are the possible outcomes:

1) You can win a Speech challenge [#36] in order for Midea to disclose Wernher's location.

2) If you fail a Speech challenge you can try intimidating Midea by threatening that you'll kill all other slaves (second dialogue option).

3) You can steal the note away from Midea and read it to find out where Wernher is hiding.

4) You can kill Midea and find the note in her pocket.

I wouldn't recommend killing Midea nor making her attack the main character, so you'll have a chance to talk to Wernher when you'll actually find him. 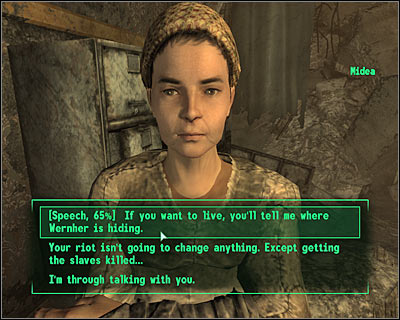 You now know that Wernher is hiding in The Steelyard, so that's your next destination. Leave Midea's Quarters. In order to get to The Steelyard you must obviously travel through The Mill and this means going through slave-infested areas. You'll probably witness new fights taking place along the way and don't forget to ignore them, so you won't have to fight back. Once you're in The Mill proceed to the passageway leading to an Abandoned Area. It shouldn't take too long for you to get to your final destination. You'll now have to travel to the staircase where you found Wild Bill's body the first time you were here [#37]. Check the description of the fourth main quest if you forgot where it was. 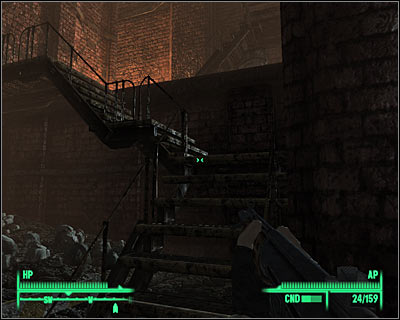 Ignore Wild Bill's body, because clearly you won't receive any additional intel here. Use the stairs to get to the upper level. Your current objective is a small shack where you fought the wildmen. Be careful, because this area may now be patrolled by one of the slaves. Ignore his attacks, because if you respond to them you won't be able to talk to Wernher. Instead proceed directly to a blue door, located to the right of the shack [#38]. Enter the new area which is going to be Wernher's Hideout. 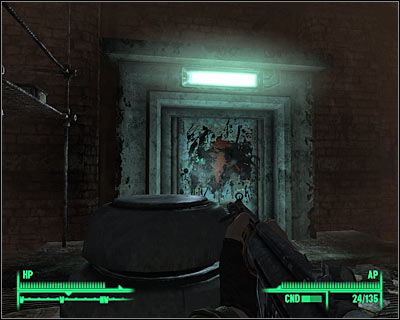 Make a few steps forward and allow Wernher to approach you, initiating a new conversation. The only exception is when you've killed at least one slave and in such case you would have to attack him right way. Here's how the conversation can end:

1) You can kill Wernher by saying that you don't have any alternatives. I have to warn you - he's a very skilled warrior, so you would have to be using one of your most powerful guns to take him down.

2) You can win a Speech challenge and convince Wernher to leave The Pitt with nothing [#39].

3) You can use a Black Widow perk if you're playing as a woman and if you've already chosen this talent during one of earlier level-ups. 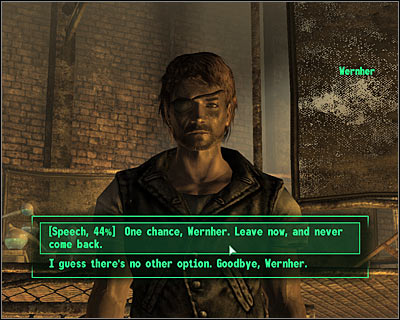 It doesn't really matter if you spare Wernher's life or kill him, because it'll solve Ashur's problem. Notice that you've been left alone inside the hideout, so you can look around a little. You'll now have to return to Uptown using a passageway located in The Mill or in Downtown. You can keep ignoring the slaves, however killing them wouldn't affect any future conversations anymore. Go to Haven Entrance and then use the elevator to reach Haven. Obviously you must go and talk to Ashur. He will thank your for your assistance. Ashur will give instructions on how to use an ammo mill than can be found in The Mill district [#40]. You'll also find out that you can start bringing in teddy bears for Sandra's baby and you'll be rewarded for each such find. Exit The Pitt or go to The Mill to manufacture ammo. Either way, your job in The Pitt is done. Congrats! 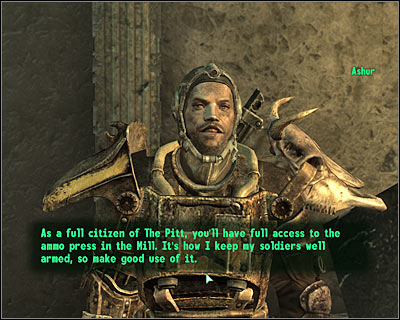