Received from: automatically upon arrival in Downtown [The Pitt - Downtown]

Solution: It doesn't really matter if you've already talked to Midea or if you have to find her, because it won't interfere with the rest of the quest. Obviously you should take some time to explore the Downtown area, especially since none of the slavers will order to you to get to work. The area isn't too big, but sadly you won't be allowed to initiate conversations with most of the slaves and raiders. There are only two exceptions in the western section of Downtown. Adan has some rather useless information. Nola on the other hand is a much more interesting person [#13], because she can heal your wounds free of charge. It's a good idea to return to her each time you've suffered major injuries. There aren't any valuable items in the area, aside from a stimpack found in a broken hydrant. It's also going to be very difficult to steal items from raiders, because you'll be observed constantly by thugs occupying upper balconies. 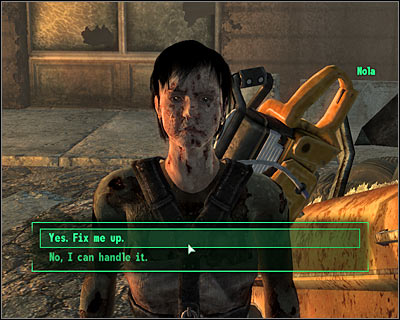 When you fell you're done exploring the western section of Downtown, proceed to a rather small passageway leading to the eastern section [#14]. Midea will be waiting for you there, but only if you've chosen a "peaceful" approach while trying to get to Downtown. She'll tell you that she wants to meet you in her house to go over details. If you've already talked to her, you won't meet her again, so you may proceed forward right away. As for the eastern part of town, the only person you'll want to talk to is Kai. I wouldn't recommend asking her for free meat, because it's highly toxic and you would only increase your radiation levels. There are a few useful items hidden in the area. Take two stimpacks and purified water from an engine block and three stimpacks from a TV (near Kai). 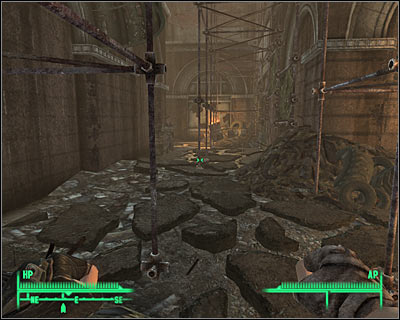 You may finally head over to Midea's Quarters. Once inside you'll automatically initiate a new conversation. Just as while you were talking to Wernher, you won't have to be extra polite towards her, because you won't gain any rewards [#15]. On the other hand, if you're rather hostile you won't make her mad enough for her not to help you. Remember to ask Midea about the strange creatures of The Pitt called Trogs, especially since you'll start encountering them very soon. You can also ask about receiving a better weapon from the one smuggled by Wernher. Midea will tell you to ask Marco from The Mill district, because he may have something interesting for you. This conversation is going to be eventually interrupted by one of the slavers. Thankfully you don't have to worry about taking part in a new fight. Instead you'll be given a task by the slavers - collecting steel ingots. 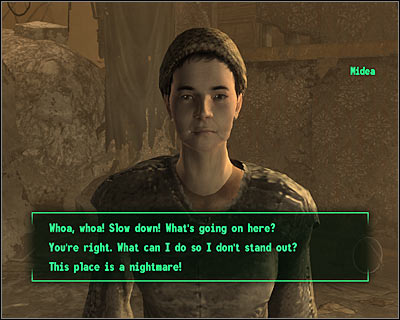 Wait for the conversation between Midea and Jackson to come to an end. You won't have to talk to her again, because you've already received your new assignment. There aren't any interesting items in her quarters, so you may exit this area right away. Return to the start area. Talk to Milly along the way if you want to. She'll ask you to find her friend Wild Bill. He was sent to where you're going right now, so it would be polite to agree to help her out. Go to the area where you've talked to Adan and find a door to his left [#16]. Use the door to travel to The Mill. 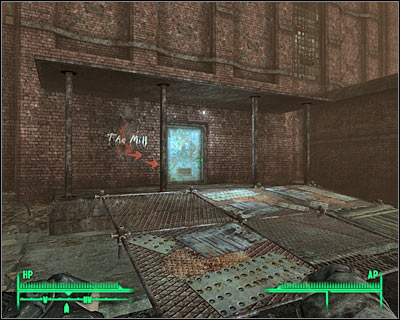