Make sure that The Pitt has been installed properly on your computer and you'll also have to activate it from the game's autostart (ThePitt.esm). The first expansion to Fallout 3, titled Operation Anchorage, tolerated exploring the new content using a "fresh" character who has just left Vault 101, however The Pitt tends to be less forgiving. I wouldn't recommend starting this new journey unless you have a character on level 5-6. Thankfully this won't be a major issue, because the game will make enemies weaker or stronger depending on your current experience level. The same goes with your allies, so if you're playing as a weak hero they'll help you on many occasions. It's fairly important that you ditch most of your current equipment before travelling to The Pitt area. There are two main reasons to do that - you will lose your equipment upon entering The Pitt (thankfully - only for the purpose of completing two quests) and you'll want to collect a lot of cool items found in the new area. You wouldn't be able to carry both (current & future equipment). It would be a good idea to leave one good armor, one helmet and one heavy weapon. The rest of your stuff, including smaller guns and drugs, should be left in your home in Megaton or in your apartment in Tenpenny Tower. The only real exception to that rule are keys and figurines, because you won't lose them no matter what happens.

This time you won't have to wait for a few minutes to receive a distress call, because The Pitt will start automatically once you've loaded one of your saved games. Remember that you must be somewhere in Capitol Wasteland where you can get reception. Wait for a dialogue window to appear on your screen, informing you that a new distress call has been added to your list of radio stations. Open the Pip-Boy if you want to and play Wernher's Distress Signal [#1]. You can now listen to a short transmission made by Wernher which will repeat once every ten seconds. It's not required to open the list, because a new location titled Radio Tower is going to appear on your personal map either way. 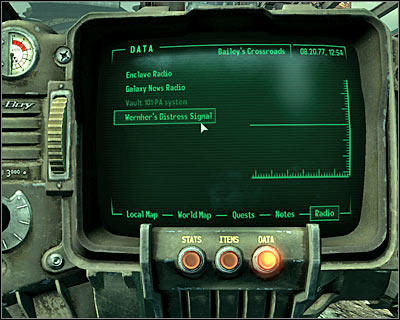