You'll soon find out that most of the outcasts present in this base want to keep the loot for themselves. The leader of the rebellion is going to be Sibley and only two outcasts are going to be on your side. The most important thing here is that you get ready for a huge battle while they're still arguing. Proceed forward and take two items [#102] - winterized T-51b power armor and winterized T-51b power helmet. As for the weapons, you should be using a plasma rifle, however if this is the beginning of your journey, take a Gauss rifle from one of the shelves. Don't forget to collect a few microfusion cells as well. Open the inventory to wear the armor and to pick the new weapon from your arsenal. 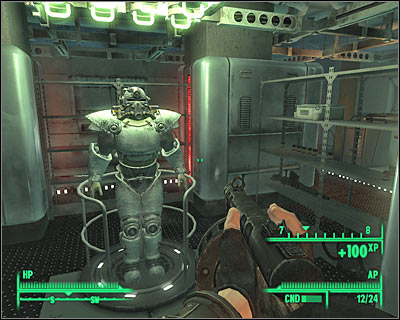 Approach the door of the armory and wait for the moment to Sibley and his colleagues to turn on McGraw and Olin. You'll know when this has happened when their icons change color to red. You should be using similar approach to the duel with the Chinese general, so activate V.A.T.S. and aim for their heads [#103]. Naturally you shouldn't be standing while you regain action points, so you must keep attacking them even when you've returned to real time combat. Thankfully your new armor will protect you against most of their attacks. Keep fighting until all hostile outcasts have been killed. 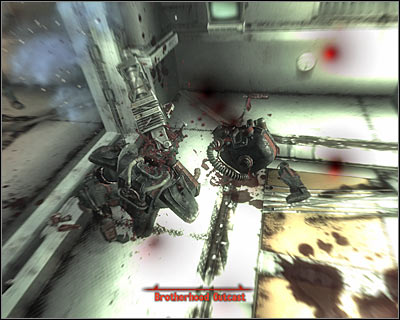