Walkthrough: I would recommend that you activate this side mission along with two other subquests, so you won't have to return to Scribe Bigsley too many items. If you don't want to participate in other subquests proceed directly to Megaton. You can activate this quest by witnessing a scene near the main gate [#98]. A woman named Rose will give a bottle of holy water to one of the beggars and he'll immediately die. Talk to her and you'll find out that she received this holy water from one of the monks living in a monastery located in Springvale. Notice that she gave you a pamphlet. 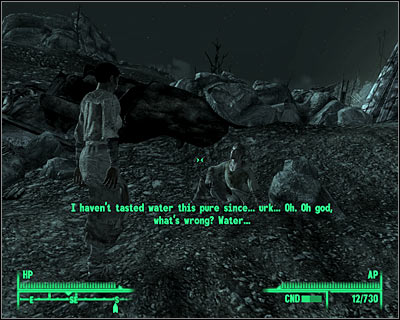 If you don't want to talk to Rose or if you by any chance you haven't met her you should enter Megaton. You can now either proceed to your house and you would find the pamphlet stuck to the door [#99] or you can wait for an anonymous citizen of Megaton to approach you and to hand over this object. I would recommend that you take your time and read the note. 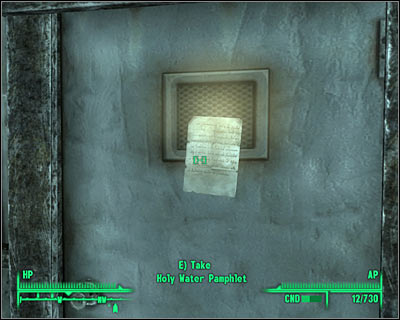 You may leave Megaton. The monastery is located in Springvale, so you don't have to fast travel, because you can get there on foot. Once you've arrived at your destination approach the monastery building [#100] and you're going to be greeted by brother Gerard. He will give you a bottle of holy water, asking you to drink it. Here's where you'll have to decide how to get inside the monastery. 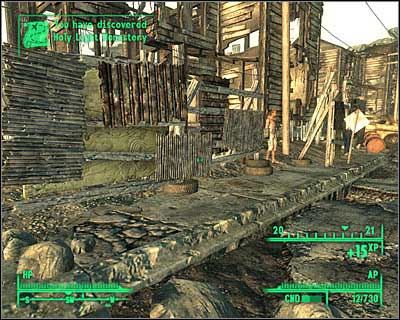 Finding a way into the monastery:

You can choose an aggressive approach, ignoring brother Gerard's wish to drink the water. If you'd like to see him dead there's nothing standing in your way of killing him [#101]. You should know that other monks will know about his death, but you won't have to worry about them turning hostile towards your character. You could try stealing a monastery key from Gerard, however chances of success are slim at best. You can also ignore him and find a hatch leading to the Eternal Light Monastery. Opening the hatch would only be possible with very high Lockpicking skill. 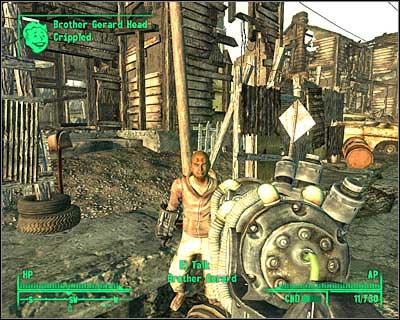 If you plan on talking to brother Gerard again you'll have to drink the holy water he gave you. I guess you won't be surprised to hear that you'll suffer from the effects of radiation. It won't be a lethal dose, so don't worry. Talk to him again and ask him about the monastery and about the holy water if you want to. Eventually you'll find out that you won't be allowed inside the monastery until you become one of the enlightened [#102]. This of course means exposing yourself to more radiation. Ready to become green? :-) 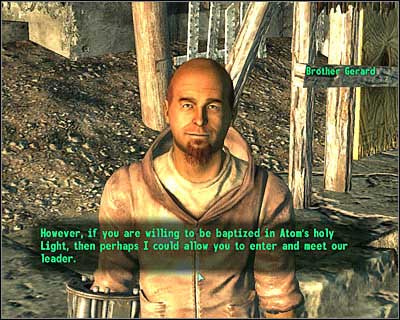 Thankfully you won't have to leave this area in order to comply to Gerard's wish. Instead enter the building and go to your right. Press a switch [#103] and get closer to a bathtub. Notice that you've exposed yourself to a very large dose of radiation. You can return to Gerard in a few seconds and win a Speech challenge to convince him that you should gain access. If you fail you'll have to go back to the bathtub and receive even more radiation. Either way you'll end up getting a monastery key from Gerard. Don't forget to heal yourself after the final conversation. Use a hatch in the floor leading to the Eternal Light Monastery. 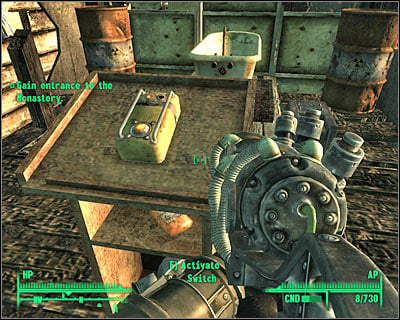 Start moving forward until you get to a slightly larger room. You'll meet Mother Curie III here, as well as a couple of ghouls. There are three ways to complete this quest. Two methods will require you to persuade her to change her mind and the third method will require you to kill all the monks.

Approach Mother Curie III and initiate a new conversation during which ask her about the monastery. You can ask her an additional question if you have a Science skill and the main character will notice that she's turning people into ghouls. Finish the conversation by trying to convince her that her actions are wrong [#104]. This can only be done if you have high Charisma. 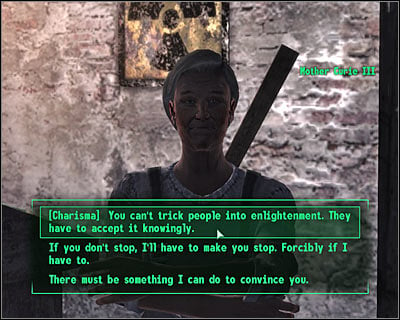 If you can't persuade Mother Curie using the method mentioned above you can choose the last topic from the list and you'll find out that the only person capable of changing her mind is going to be the prophet of Atom. Proceed to the basement and locate a new switch. Press the switch and then remain inside the irradiated area [#105]. You'll have to wait until the main character receives 800 rads. Quickly retreat from the hazardous area, because you'll be in critical condition. Slowly head over to Mother Curie. Talk to her and pose as a prophet of Atom. This will result in her stopping the further distribution of holy water. 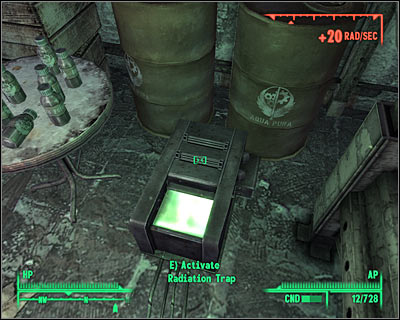 Obviously you'll have to kill all the monks if you're planning on choosing a hostile approach, including Mother Curie III. It's not going to be easy as it might seem, because there are two very powerful ghouls in the basement of the monastery and you would have to kill the beasts along with other hostile units [#106]. Don't forget to use your must powerful weapons and it would also be a good idea to set up a minefield near the stairs leading to the cellar. 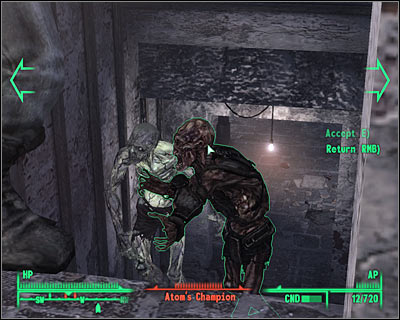 It doesn't matter whether you've been able to convince Mother Curie or killed all the monks, because the only thing that counts is that you got the job done. Go back to Jefferson Memorial and talk to Scribe Bigsley to claim your reward [#107]. Don't count on unbelievable treasures, because you'll get only 300 bottlecaps without being able to ask for more money. 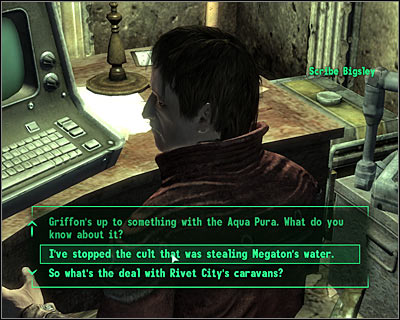