Make sure that Broken Steel has been installed properly on your computer and you'll also have to activate it from the game's autostart. Two previous add-ons for Fallout 3 (Operation Anchorage and The Pitt) allowed the player to explore new content using a low-level character, however in this case I would STRONGLY recommend playing as a powerful hero on the 20th level of experience. Don't forget to gain access to powerful weapons, armor and additional equipment and to have at least one follower (my choice is Fawkes).

You should start playing the game somewhere near the end of the main campaign. To be more precise - somewhere near the end of Take it Back! quest. I would recommend choosing one of two areas. You can load the checkpoint from the first corridor of Jefferson Memorial building (after you've followed Liberty Prime and took out most of Enclave's troops) or you can skip forward a little and move directly to Jefferson Memorial - rotunda which is the last area of the game. I would recommend replaying as many battles with the Enclave as possible, because you'll start earning experience for the 21st level as soon as you've installed Broken Steel DLC.

Naturally you will have to get rid of colonel Autumn again [#1] (don't forget that you don't have to fight him - there's a peaceful solution). Once he's gone you'll have to approach the ramp and listen to final statements. 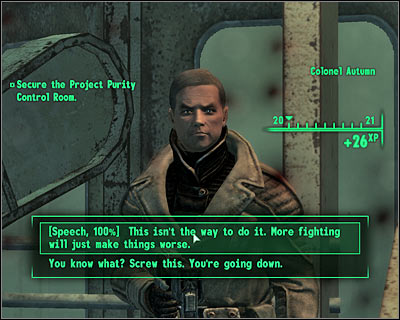 Make sure to read my main guide in order to find out about possible endings to Fallout 3. There are some differences resulting in the installation of Broken Steel. Here's what has changed:

- Entering the irradiated room and entering the correct code won't result in the main character dying, because he's going to be saved by the members of the Brotherhood of Steel. You'll soon find out how this has happened.

- Ordering Sara to enter the irradiated room will still result in her death, because she can't be saved by the brotherhood.

- In the main game you had to make a choice between you and Sara, because you couldn't ask any of your teammates for help. This has now changed. I would recommend asking Fawkes to start the purifier [#2], because he won't suffer negative effects of the radiation.

Remember that you can still upload the virus found in Raven Rock, however doing this won't change the outcome of the game drastically. 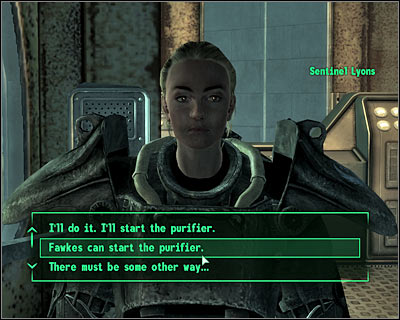 Either way you must wait for the purifier to start and then you'll be greeted with a set of familiar cut-scenes. Be patient and wait for those to end. You'll now find out that the new content starts two weeks later. You'll wake up in the Citadel [#3]. Notice that you're radiation-free even if you've decided to enter the irradiated room to start the device. 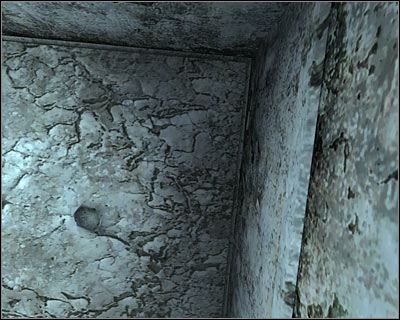