AIMING FOR A CERTAIN PART OF THE BODY

I'm sure you won't be surprised to hear that you're allowed to aim for different parts of the body while using the V.A.T.S. system to eliminate your enemies. You probably won't have a chance to do this in real-time combat, especially when you'll be dealing with moving targets. The only real exception here is shooting at a motionless object with a sniper rifle.

Obviously for most of the time you should be aiming for heads of the people or the creatures you're fighting with. The main reason is that a successful headshot takes away A LOT of health points and usually it allows you to kill your enemy with only one blow. This becomes especially important when going against larger groups of raiders and feral ghouls. Sadly not always you're able to pull off a headshot, because you may be dealing with nasty obstacles or you may just be standing too far away from your target and this is when you'll receive less chances for the shot to precise. In such cases instead of aiming for the head you can target other limbs. Shooting at the corpus is always a good idea when you're going for a hit, however this area is often better protected against your attacks. If you're dealing with supermutants and deathclaws you should consider shooting at the legs so you won't have to worry about these creatures getting dangerously close to you. If you're going against armed opponents, target their hands of legs so they won't be able to keep shooting at you after a successful hit.

Capitol wasteland is also inhabited by monsters with no distinguishable heads. This means you must find their other weak spots and to exploit them. For instance, while fighting the ants you should be aiming for their antennae. It shouldn't take you too long to observe their reactions and to take appropriate measures. 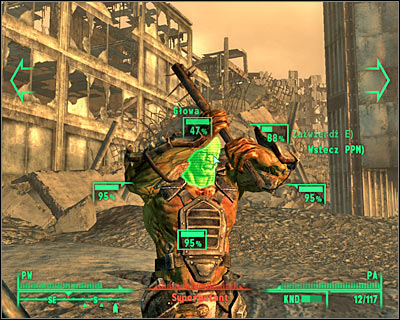 Before you start shooting at an enemy character, make sure that you have a chance of actually hitting the target, especially the head area.

I've mentioned many times before that grenades are very useful in the game, even if you're going against supermutants or robots (in this case you should arm yourself with pulse grenades instead of frag grenades). The most important thing for you to remember about is that grenades must always land exactly where you want to them, so don't throw them if you have less than 70-80% chances of success. Not only you'll lose a grenade with a bad throw, but you may injure your allies or even your main character by mistake. Make sure that you've spent a lot of point developing Explosives skills and don't forget to always stand in the open, so that grenades won't bounce off walls and other large objects.

Landmines are also very interesting part of your gear. You'll find a lot of these objects in Capitol wasteland and you shouldn't sell them, however carrying a lot of landmines may have a negative effect on the size of your inventory. Take your time to place the landmines in areas that are about to be populated by enemy creatures. You can also start moving backwards and throw them so they'll land in front of you, but this only works when you're fighting relatively slow creatures like large ants or mirelurks. 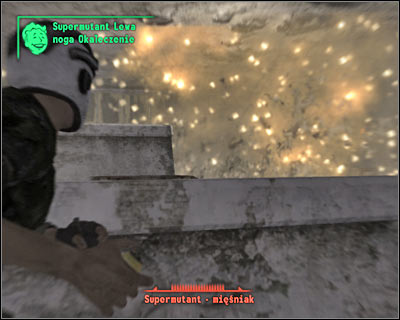 Mines and grenades are very useful when trying to get rid of enemy forces.

USING SURROUNDING OBJECTS TO YOUR ADVANTAGE

The environment can play an important role while trying to eliminate enemy units, especially when taking a trip to the D.C. ruins. You should notice that there are a lot of destroyed cars in the game and you can blow them up to seriously injure nearby hostile units. Obviously you should prevent your enemies from doing that and not use wrecked cars for protection, because sooner or later they're going to be destroyed. You should also be on a look out for power generators. There are a lot of them in the sewers and near larger settlements. An explosion of the generator is much smaller, but it can also do some damage. 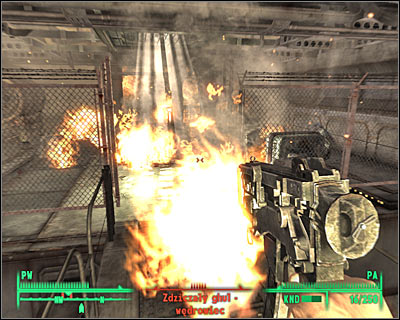 Explosions in your surroundings may both assist as well as harm you.

You can also make your battles easier by using all sorts of drugs. Jet is by far the most popular drug in the game, mostly because it's easy to find and not that expensive if you want to buy some from a doctor or a junkie. Don't forget that this is still a drug, so you can get addicted each time you take some jet. Addiction isn't life threatening, but it can lower your Agility and this means it'll have the opposite effect (taking away action points instead of giving them). The standard version of jet adds 30 action points and that's a lot. You can also interact with a ghoul named Murphy with hopes of getting your hands on ultrajet.

A safer way to gain advantage over your opponents is to drink a Nuka-Cola Quantum. Each time you've done that you'll receive 20 additional action points. Remember to fulfill Nuka-Cola challenge quest in the first place, because you won't be given new bottles in exchange for those you've already wasted and you'll have more problems reaching the limit of 30 bottles being delivered to Sierra.