"Fallout 3" gives you a choice between real-time combat and a turn-based system called V.A.T.S. This module provides you with a certain amount of action points each time you start a new turn. None of these systems work is an ideal tool, so I would recommend using them both, depending on the current situation on the battlefield.

V.A.T.S. system is a better choice when you're fighting at a very close range. This usually occurs when you're trying to take down enemies equipped with some kind of weapons. A combat shotgun is by far the most useful gun at close range and you should consider using it with the V.A.T.S. module. You'll soon notice that you can win even when trying to take down dangerous opponents. Don't forget that each action takes a few points. It's fairly obvious that you can't fire too much before you end the turn. The amount of points required to take an action depends on its size and firepower. For instance, a pistol requires less points than a rifle and a rifle requires less points than a rocket launcher. You must find a compromise between firepower and the possibility of attacking your enemies several times before your action points run out.

When you're planning to eliminate your enemies from a large distance you shouldn't use V.A.T.S. The reason is simple - you'll soon notice that your weapon become less effective, because there's a smaller chance of hitting the target. As a result you would be wasting your ammo and you would also allow your enemies to get closer. I would recommend that in real-time combat you rely on all kinds of rifles, especially hunting rifles and sniper rifles. They're easy to get so you shouldn't have any problems repairing them on your own. You'll also find a lot of ammunition.

You should also know that if you find a battle to be too difficult, you can always try and holster your weapon before you're attacked by your enemies. If you're lucky they will allow you to surrender, however you must be going against intelligent creatures, because otherwise you'll fail miserably. 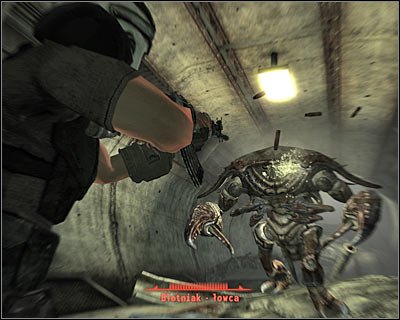 V.A.T.S. system should be used to win battles at a close range.
See/Add Comments
JOIN FOR UPDATES